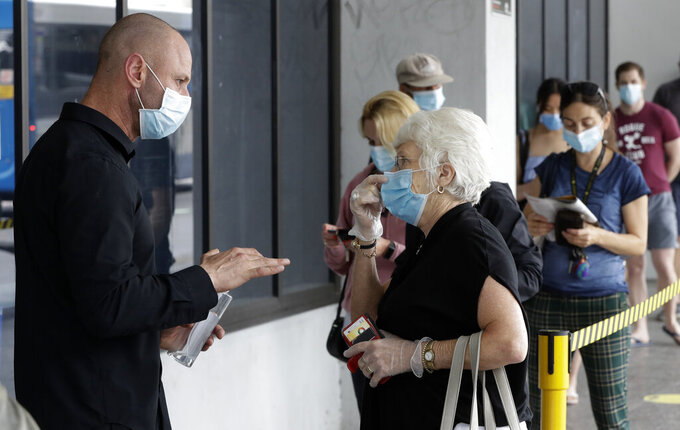 A staff member questions people as they wait in a line at a COVID-19 testing station on the northern beaches in Sydney, Australia, Monday, Dec. 21, 2020. Sydney's northern beaches are in a lockdown similar to the one imposed during the start of the COVID-19 pandemic in March as a cluster of cases in the area increased to more than 80. (AP Photo/Mark Baker)

SEOUL, South Korea (AP) — Gatherings of more than five people will be banned in South Korea’s capital region as an elevated step to suppress what authorities call an “explosive” surge in coronavirus infections.

The Seoul region is home to half of South Korea’s 51 million people and has been at the center of a recent viral resurgence. The country averaged about 960 new virus cases each day in the past week, more than 70% of them in the Seoul metropolitan area.

Acting Seoul mayor Seo Jung-hyup said Monday the ban will apply to any type of meetings including year-end parties, office dinners, birthday parties and picnics. Only weddings and funerals can follow the current rule of not more than 50 people.

He says the new restrictions will take effect from Wednesday and last until Jan. 3 in Seoul, Gyeonggi province that surrounds Seoul and Incheon city, just west of Seoul.

Seo says he knows the ban is “harsh” but stresses the current viral spread cannot be slowed without preventing transmissions among relatives and company colleagues. He says Seoul could face a lockdown if the current “explosive” surge isn’t contained.

Earlier Monday, South Korea has reported 24 more virus-related deaths in the country’s highest daily fatalities since the pandemic began. The government added a total of 926 new cases, taking the country’s total to 50,591 including 698 deaths.

— Tokyo Gov. Yuriko Koike has asked all residents to celebrate Christmas and New Year's at home just with their families. Daily coronavirus cases have been steadily on the rise across Japan, with Tokyo hitting a new daily high at 822 on Friday. On Monday, the capital reported 392 new cases for a prefectural total of 51,838. “Christmas and New Year's holidays are coming up, but this year I would like everyone to put life before anything else,” Koike told a special news conference, “Please spend the holiday season just with your family and stay home.” Koike said organizers of Tokyo’s Christmas illumination events have agreed to close at 8 p.m. every night, and subway companies will not operate overnight trains on New Year’s Eve to discourage people from gathering for annual countdown events. City-operated parks and zoos will also be closed until Jan. 11.

— Thailand’s total number of confirmed coronavirus cases surged past 5,000 on Monday as hundreds of migrant workers tested positive, posing a major challenge for the authorities. Thailand has been one of several Southeast Asian countries that were faring relatively unscathed by the pandemic. But on Saturday, health officials reported a daily record of 548 new cases, almost all of them among migrant workers in the seafood industry in Samut Sakhon province, 34 kilometers (21 miles) southwest of Bangkok. Thai Prime Minister Prayuth Chan-ocha said his government would wait to see how the situation looked in a week’s time before deciding on any special restrictions for New Year’s celebrations. The new cases in Samut Sakhon, most not exhibiting symptoms, were found by mass testing after a 67-year-old shrimp vendor at a seafood market tested positive for the virus. The Klang Koong seafood market — one of the country’s largest — and its associated housing were sealed off by razor wire and police guards. The province has also imposed a night curfew and other travel restrictions until Jan. 3. Many public places, including shopping malls, schools, cinemas, spas and sports stadiums, have been ordered closed.

— An Australian state government leader apologized for a bungled hotel quarantine program that led to most of the nation’s COVID-19 deaths. A retired judge who investigated Victoria state’s quarantine program for returned travelers criticized the use of private security guards to enforce isolation in Melbourne hotels in May and June. Victoria Premier Dan Andrews explained the quarantine system had been implemented quickly and without a pandemic rule book. “I want to apologize to the Victorian community for the very clear errors that were made in this program,” Andrews said after the report's release. The lax infection controls at two Melbourne quarantine hotels set off a wave of infections in Australia’s second-largest city while the rest of the country had been largely virus-free. Of Australia’s 908 deaths from COVID-19, 820 died in Victoria. Police now provide security at Melbourne quarantine hotels.

Meanwhile, the spread of an ongoing outbreak in Sydney’s northern beach suburbs appeared to be slowing. Of the 83 cases confirmed, only 15 were added in the past 24 hours. That's half the previous day's increase, despite more than 38,000 people being tested in the latest day, New South Wales state Premier Gladys Berejiklian said. She cautioned against assuming those numbers will continue to decline, saying: “In a pandemic, there is a level of volatility, so we’ll closely monitor what happens.” All 15 new cases were linked to two live music venues. The original infection is a U.S.-strain suspected to have leaked from Sydney hotel quarantine. More than 250,000 Sydney residents in the northern beaches area are under a four-day lockdown until Wednesday. Berejiklian said what restrictions continue over Christmas will be reviewed on Wednesday. All Australian states have imposed restrictions on travelers from Sydney and parts of New South Wales because of the outbreak.

— Hong Kong and India will ban flights from Britain after a more infectious variant of the coronavirus was found in the country. They join countries like Germany, France, Belgium, Italy, Ireland, Canada and the Netherlands in stopping flights from Britain, after the mutated strain of the virus was found to be 70% more transmissible than usual. Hong Kong Health Minister Sophia Chan said Monday that recent arrivals from Britain will also have to serve 21 days of quarantine, a week longer than the usual 14-day period. Two weeks of this will be served in a designated quarantine hotel, and the final week is to be served at home. As of Sunday, Hong Kong had reported a total of 8,153 infections, with 130 deaths. Indian Civil Aviation Minister Hardeep Singh Puri tweeted on Monday that the suspension of flights is from Wednesday until Dec. 31.