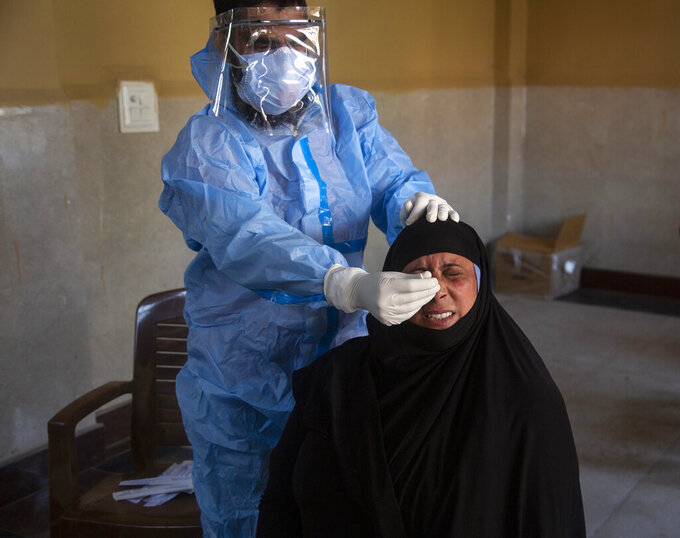 A Kashmiri Muslim woman reacts as a health worker takes her nasal swab sample to test for COVID-19 in Srinagar, Indian-controlled Kashmir, Saturday, Oct. 3, 2020. India has crossed 100,000 confirmed COVID-19 deaths on Saturday, putting the country's toll at nearly 10% of the global fatalities and behind only the United States and Brazil. (AP Photo/Mukhtar Khan)

MELBOURNE, Australia (AP) — The COVID-19 figures in Australia’s Victoria state continued to show improvement on Saturday but officials are concerned about an outbreak at the country’s largest shopping center.

Victoria reported three more COVID-19 deaths and eight more cases. The figures take the state toll to 805 and the national death count to 893.

Melbourne’s latest 14-day average stood at 12 cases, and there have been 11 cases with an unknown source in the past two weeks up to Wednesday.

A cluster of cases at the 550-store shopping center grew to 11 and includes a family.

“If we were to open up now, just as our modeling tells us ... it will be many hundreds of cases,” Andrews said.

In other developments from the Asia-Pacific region:

— India crossed 100,000 confirmed COVID-19 deaths on Saturday, putting the country’s toll at nearly 10% of the global fatalities and behind only the United States and Brazil. The Health Ministry reported another 1,069 fatalities in the past 24 hours, driving the death toll to 100,842. It also raised the country’s confirmed caseload to more than 6.4 million with 79,476 new infections. The grim milestone comes at the heels of a growing crisis for Prime Minister Narendra Modi and his Hindu nationalist government that has been criticized over the handling of the virus and doing very little to alleviate the contracting economy that has left millions jobless. The overall fatalities are most certainly an undercount, experts say, as deaths may have been attributed to other causes, especially in the early days when testing was abysmally low for a country with a population of 1.4 billion. India’s poor track record to register mortality data even before the pandemic has further amplified questions over the country’s actual death toll.

— Chinese President Xi Jinping has sent a message of sympathy to U.S. President Donald Trump and First Lady Melania Trump following their coronavirus diagnosis. State TV reported that the message said: “My wife, Peng Liyuan, and I express our sympathies to you and your wife and wish you a fast recovery.” Chinese-U.S. relations have tumbled to their lowest point in decades amid disputes over trade, technology, security, Beijing’s tightening of control over Hong Kong and complaints about abuses in China’s Muslim northwestern region of Xinjiang. Trump has blamed China, where the coronavirus outbreak began in December, of mishandling the outbreak and allowing it to spread.

— South Korea’s daily coronavirus tally has remained in double digits for a third straight day, as authorities called for vigilance during one of the country’s biggest holidays. The 75 cases added in the past 24 hours took the country’s total to 24,027 with 420 deaths. South Korea’s caseload has been waning following a spike in new infections between early August and mid-September. Stringent social distancing was credited with slowing the outbreak. But worries about a rebound in cases have grown again as South Korea celebrated the traditional autumn Chuseok holidays this week that almost certainly increased public mobility.

— Three close aides to Nepal’s Prime Minister Khadga Prasad Oli have tested positive for the coronavirus. Oli’s political adviser Bishnu Rimal, press adviser Surya Thapa and foreign affairs adviser Rajan Bhattarai announced on social media separately about their test reports on Saturday. These three were the closest officials who worked with Oli mostly out of his official residence in Kathmandu. They are also the highest-level officials to test positive for the virus in Nepal. It was not clear if the prime minister had taken any tests recently. Nepal has so far 84,570 confirmed cases of coronavirus and 528 deaths.