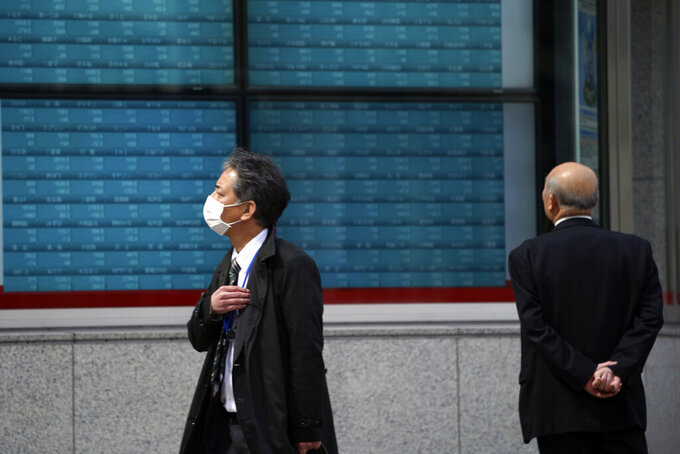 Shares fell in Singapore and Jakarta but rose in Taiwan.

“It’s back to the regular order of business, which is trying to figure out why stocks are so high!" Stephen Innes of AxiCorp said in a commentary. “You can add the resurgence of COVID-19 to the laundry list of things the market doesn’t care about, so it seems.”

On Wall Street, the S&P 500 rose 0.6% to 3,117.86 after initially sliding 0.6% following weakness in overseas markets as the global tally of coronavirus infections surpassed 9 million. Investors are weighing the risks that rising coronavirus cases could pose to hopes for an economic recovery. That's led traders to bid up stocks in technology companies that offer services online, a thriving conduit of commerce through the outbreak.

“In an environment where the WHO had only recently announced on Sunday a record increase in global Covid-19 cases, sentiment can certainly still turn very promptly with the flick of the switch," Jingyi Pan, a market strategist with IG in Singapore said in a report.

Overnight, the head of the World Health Organization, Tedros Adhanom Ghebreyesus, warned that the coronavirus pandemic “is still accelerating” around the globe. He noted that the most recent 1 million cases of the virus were reported in just the last eight days.

However, Navarro said his comments were taken out of context, and President Donald Trump tweeted that the agreement with China, the basis for a truce in a tariff war over technology and other problems, is still on. Trump tweeted: “The China Trade Deal is fully intact. Hopefully they will continue to live up to the terms of the Agreement!”

Investors are favoring retailers and other companies that are poised to do well now that more businesses have been given the go-ahead to reopen. But traders are also continuing to hedge their bets by snapping up traditionally less risky assets, such as government bonds and gold, which also rose. Bond yields were mixed.

The Dow Jones Industrial Average picked up 0.6%, to 26,024.96 after earlier sliding 203 points. The Nasdaq composite, which is heavily weighted with technology stocks, climbed 1.1%, to 10,056.47, extending its winning streak to a seventh day.

Small company stocks, which have lagged the broader market’s rebound that began in April, also notched solid gains, with the Russell 2000 index adding 1.1%, to 1,433.53.

While recent U.S. economic data have shown improvement as businesses reopened, it may take years for the economy to fully recover. In contrast, it took just a few months for the stock market to rally back to within 9% of its record.

David Kelly, chief global strategist at JPMorgan Funds, sees a disconnect between the market's recent gains and what the economic data show. He says the markets seem to be straying further and further from fundamentals, which is making him “more distrustful of markets as an economic barometer.”

New data on U.S. home sales Monday showed the virus outbreak continues to disrupt the U.S. housing market. Sales of previously occupied homes plunged 9.7% in May, according to the National Association of Realtors. The May slide pushed sales down to a seasonally adjusted annual rate of 3.91 million, the slowest pace since 2010. Still, the median home price rose 2.3% from a year ago, a sign that demand could pickup up in coming months.

Investors will get a broader look at the state of the economy toward the end of this week, when the government issues data on consumer spending, weekly unemployment aid applications and durable goods orders. On Tuesday, the Commerce Department serves up new home sales figures for May.

Benchmark U.S. crude oil was unchanged at $40.46 per barrel in electronic trading on the New York Mercantile Exchange. It rose 71 cents on Monday. Brent crude, the international standard, edged 1 cent higher to $43.08 per barrel.