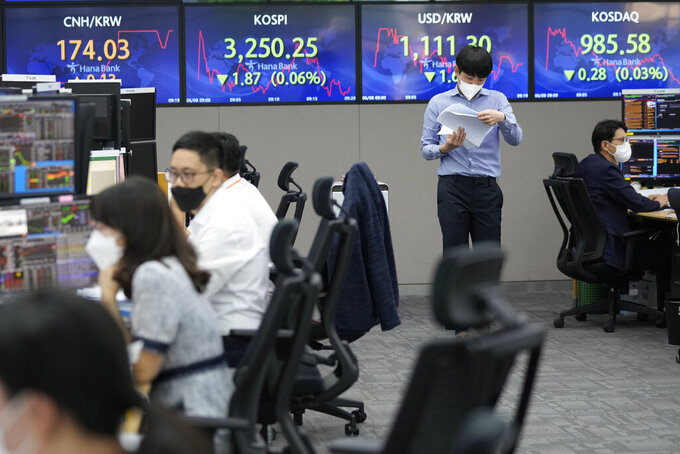 A currency trader takes a look at documents at the foreign exchange dealing room of the KEB Hana Bank headquarters in Seoul, South Korea, Tuesday, June 8, 2021. Stocks edged lower in Asia on Tuesday after a mixed finish on Wall Street, as investors weighed the risks of inflation against signs the recovery from the pandemic is gaining momentum. (AP Photo/Ahn Young-joon)

BANGKOK (AP) — Stocks edged lower in Asia on Tuesday after a mixed finish on Wall Street, as investors weighed the risks of inflation against signs the recovery from the pandemic is gaining momentum.

Benchmarks fell in Tokyo, Hong Kong and Shanghai and were flat in Seoul.

In a subdued opening to the week in New York, the S&P 500 slipped less than 0.1%, giving up some recent gains. The benchmark index is within 0.2% of the all-time high it reached a month ago.

Japan reported that its economy contracted at a 5.1% annual pace in January-March, revised upward from the earlier reported 6.3% contraction. On a quarterly basis, the economy shrank 1% instead of the preliminary minus 1.3%.

A worsening coronavirus outbreak that has caused the government to declare a partial state of emergency and tighten pandemic precautions is likely to keep the economy in the doldrums in the currenct quarter, Makoto Tsuchiya of Oxford Economics said in a commentary.

“However, we remain optimistic that the pace of recovery will pick up in the second half as domestic demand recovers, supported by increased vaccinations, while foreign demand should continue to support the manufacturing sector," he said.

This is a relatively light week for economic data, though investors will get another glimpse into the impact of inflation on Thursday with the U.S. Labor Department’s consumer price report for May. Prices on everything from food to clothes and housing have been rising as the economy recovers.

Investors and economists are concerned that a steep rise in prices could crimp the recovery and prompt the Federal Reserve to withdraw some of its support for the economy such as keeping interest rates ultra-low and buying bonds.

“The market is treading water right now and waiting for another catalyst to move higher,” said Sam Stovall, chief investment strategist at CFRA.

Treasury yields mostly rose. The yield on the 10-year Treasury was steady at 1.57%.

U.S. benchmark crude oil lost 55 cents to $68.68 per barrel in electronic trading on the New York Mercantile Exchange. It lost 39 cents to $69.62 per barrel on Monday. Brent crude, the international standard, declined 57 cents to $70.92 per barrel.