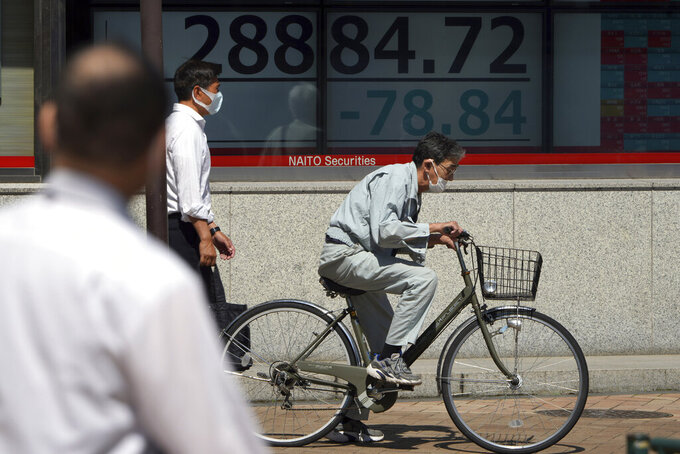 A man wearing a protective mask rides a bicycle in front of an electronic stock board showing Japan's Nikkei 225 index at a securities firm Wednesday, June 9, 2021, in Tokyo. Asian shares were mixed on Wednesday after China reported a big jump in factory gate prices at a time when inflation is a top investor concern. (AP Photo/Eugene Hoshiko)

Asian shares were mixed on Wednesday after China reported a big jump in factory gate prices at a time when inflation is a top investor concern.

Shares fell in Tokyo, Seoul and Sydney but rose in Shanghai and Hong Kong.

China's producer price index, which measures prices of raw goods and services, jumped 9% from a year earlier in May, the fastest increase since 2008, during the global financial crisis, and above analysts' forecasts, the government said.

However, the headline consumer price index rose a more modest 1.3%, lower than expected. Inflation in the first five months of the year averaged 0.4%.

Surging prices for oil and other commodities and manufacturing components such as semiconductors were the main factor behind the jump in producer prices, Julian Evans-Pritchard of Capital Economics said in a commentary. He noted prices of electronics products, in strong demand during the pandemic, have eased.

“This adds to signs from the latest trade data that global demand for Chinese consumer goods may be starting to drop back as distortions to spending patterns caused by the pandemic reverse," he said.

For now, the Chinese government appears to be focusing on resolving supply side constraints driving higher prices and less worried about a potential spiral in prices due to surging consumer demand, economists say.

Investors are more concerned with U.S. inflation data out Thursday and what it might augur for interest rates and other market-supporting policies.

Shares opened higher in India and Jakarta but fell in Singapore and Taiwan.

U.S. stock indexes meandered to another uneven finish Tuesday. Investors are awaiting the inflation data due out later in the week, though some corners of the market — cryptocurrencies and some social media-hyped stocks — kept traders busy.

Smaller company stocks once again outpaced the broader market, with the Russell 2000 index of smaller companies gaining 1.1% to 2,343.76.

Health care and communication stocks fell, as did banks, which were weighed down by lower bond yields. The yield on the 10-year Treasury fell to 1.53% on Wednesday, down from 1.57% late Monday.

Wendy’s jumped 25.9% as it appeared to join a batch of companies favored by individual investors taking cues from social media forums. Clover Health Investments soared 85.8%. Other companies whose stock values have gyrated sporadically include AMC Entertainment, Blackberry and GameStop.

Cryptocurrency traders appeared to be in a selling mood. Bitcoin and other popular digital currencies, including Ethereum and Dogecoin, all fell sharply, according to Coindesk. Bitcoin, which climbed above $60,000 early this year, slid 7% to $32,690.

Shares in Fastly, an internet cloud services provider, climbed 10.8% after it said it had addressed an internal problem that caused dozens of websites around the globe to go down briefly, including the home page of Britain’s government and The New York Times.

As investors ponder the state of the recovery, t he World Bank upgraded its outlook for global growth this year, predicting that COVID-19 vaccinations and massive government stimulus in rich countries will power the fastest worldwide expansion in nearly five decades. The 189-country anti-poverty agency forecasts the world economy will grow 5.6% this year, up from the 4.1% it estimated in January. Last year, the global economy contracted 3.5%.

The path of inflation could determine whether central banks continue to generously support economies or pull back, but the pandemic is causing disruptions and distortions that add to the uncertainty.

In other trading, U.S. benchmark crude oil gained 44 cents to $70.49 per barrel in electronic trading on the New York Mercantile Exchange. It picked up 82 cents to $70.05 per barrel on Tuesday. Brent crude, the international standard, added 42 cents to $72.64 per barrel.