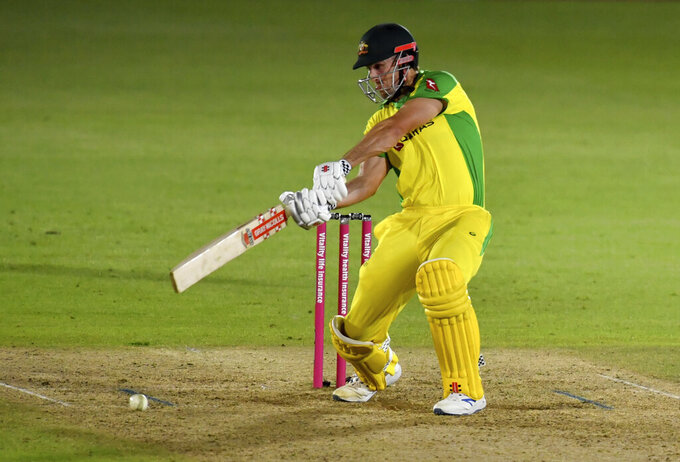 SOUTHAMPTON, England (AP) — Australia held onto Twenty20 cricket’s top ranking with a five-wicket win Tuesday in the last game of a series that England had already clinched.

Mitch Marsh finished unbeaten on 39 and hit the winning runs as Australia chased down its target of 146 with three balls to spare at the Rose Bowl.

England provisionally took No. 1 spot in the T20 format when it led the three-game series 2—0 but needed a sweep to retain top ranking.

The series marked Australia’s return to international cricket for the first time since March following the shutdown for the coronavirus pandemic.

For England, it continued a positive run since it reopened international cricket in July with a test series against West Indies and followed up with series against Pakistan and Ireland.

England will now host Australia in a three-game ODI series, the first between the countries since England won the World Cup on home soil last year.

On Tuesday, England opener Jonny Bairstow overcame a slow start to score a 44-ball 55 containing three fours and three sixes and lead the team to 145-6. That was the lowest score of the series so far, with paceman Mitchell Starc very economical by conceding just 20 runs off his four overs.

Joe Denly's late-innings 29 off 19 balls gave England's total some respectability, but Australia went at 10 runs an over off its first seven and was seemingly easing to the win.

However, the Australians slumped from 70-1 to 100-5 in six overs in its latest middle-order collapse, with Adil Rashid's legspin accounting for the wickets of captain Aaron Finch (39), Glenn Maxwell (6) and Steve Smith (3).

Marsh and Ashton Agar (16) put on a stand of 46 to see Australia home.

“We know where we messed up in the first game but tonight we were really good again for the majority of the game," Finch said, reflecting on Australia's batting collapses after promising starts in the first and third games. “It was nice Mitch and Ashton got us over the line this time. There are always areas for improvement, especially in those middle overs against the spinners."

They should all return for the three-match ODI series starting Friday.