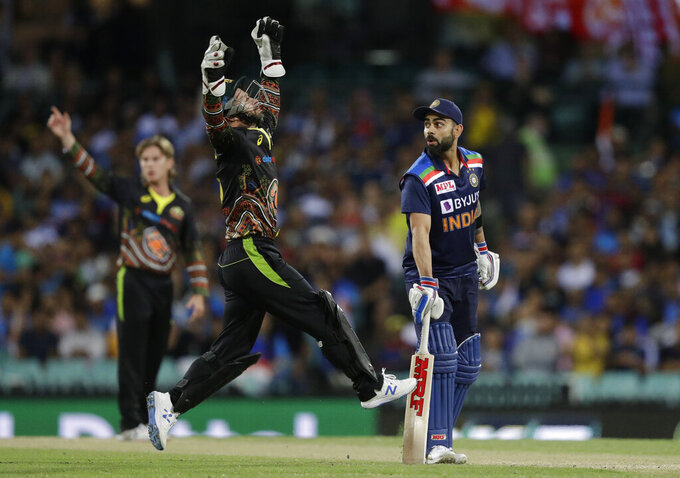 The scene is well and truly set for a four-match test series starting next week in Adelaide.

Australia won the one-day international series 2-1 and India won the first two T20s to clinch the series in the shorter format before the home team rallied to finish on a high.

It was the first major sports event in Sydney since the state government removed restrictions on crowds that were put in place for the COVID-19 pandemic, and there was plenty of entertainment for the 30,436 fans at the Sydney Cricket Ground.

Wade scored 80 from 53 balls and shared a 90-run fourth-wicket partnership with Maxwell, who had plenty of reprieves in his 36-ball 54 as Australia tallied 186-5 after being sent in to bat.

Australia’s spin bowlers — wrist spinners Mitch Swepson (3-23) and Adam Zampa (1-21) and allrounder Maxwell (1-20) — combined for the first five wickets before paceman AJ Tye dismissed Kohli for 85 in the penultimate over to all but end the chase.

Kohli had a lucky start, when Maxwell missed a run-out chance and Steve Smith dropped a catch in the outfield, before posting his 25th half-century in the T20 format.

He shared important partnerships of 74 with Shikhar Dhawan (28) for the second wicket and 44 for the sixth wicket with hard-hitting Hardik Pandya (20 from 13 balls), but wasn't able to convert the start into his first century in T20s.

India’s victory equation was 43 runs from 17 balls when Zampa removed Pandya and it got even harder when Kolhi's 61-ball knock ended on the first ball of the 19th, cutting Tye to Daniel Sams at deep backward point. India finished 174-7 from 20 overs.

“At one stage, when Hardik got going, I thought, ‘Yeah we could pull this one off,’” Kohli said, but "the middle-over phases when we were batting cost us the game.

“This series win is a nice little asterisk for us finishing the limited-overs leg of T20 on a high.”

After playing the entire Indian Premier League in the United Arab Emirates without crowds, because of COVID-19 restrictions, Kolhi said the gradual return of crowds in Australia had inspired the players from both teams.

“It’s great that we can play in front of crowds in Australia and it just gives you another dimension of motivation when you’re in a tough situation,” Kohli said. “As players, you love riding that — that’s why you’ve seen exciting games so far in the limited-overs leg. I think it’s going to the same moving forward as well.”

Australia's innings was eventful and kept the crowd and the umpires on their toes, with Kohli denied a review for signaling too late on a not out decision against Wade. It would have been overturned by the TV umpire if the challenge had been made within the required 15 seconds.

Wade, who was on 50 when he was hit on the pads, told the on-field umpire that the replay was already being shown on the stadium screen by the time Kohli confirmed he wanted to refer the decision, and the TV umpire agreed. Broadcaster Foxtel said India took 17 seconds to ask for the review.

Maxwell also had his share of drama. He was dropped twice and saw off two DRS challenges after unsuccessful appeals from India for caught-behind. The Australian allrounder also got the benefit of further intervention from the TV umpire after he'd started walking off when he was caught out — only to be called back when replays showed wrist spinner Yuzvendra Chahal over-stepped and was called for a no-ball.

A three-day tour match between Australian and Indian teams will start on Friday at the SCG, giving both squads one more chance to consider selections for the test series. The first of the three-day warmup matches between Australia A and India A ended in a draw earlier Tuesday.

Kohli said he wasn't sure if he'd play in the three-day game, or keep himself fresh for the first test starting Dec. 17 in Adelaide.