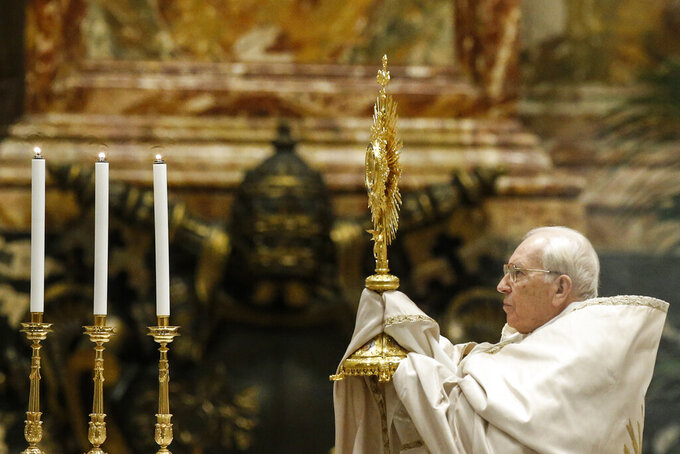 Cardinal Giovanni Battista Re celebrates First Vespers and Te Deum, the rite of thanksgiving for the end of the year, in Saint Peter's Basilica at the Vatican, Thursday, Dec. 31, 2020. The Vatican released a statement this morning saying that due to a painful sciatica, Pope Francis would not attend the Vespers in St. Peter’s today and the 9gmt Mass tomorrow morning as scheduled. (Fabio Frustaci/pool via AP) 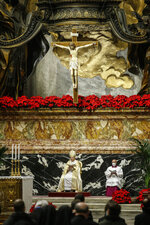 Francis was suffering from “painful sciatica” and could not preside at an hour-long, year-end prayer service Thursday evening, spokesman Matteo Bruni said. The pope also won’t celebrate Mass in the basilica n New Year’s Day for the same reason, he said.

Francis has spoken openly about his sciatica in the past. It is a form of pain in the lower body caused by compression or irritation on nerve roots or on the sciatic nerve, which runs from the lower spine down the thigh.

Bruni said Francis still plans to deliver his scheduled New Year's blessing at noon Friday during an appearance in the library of the Apostolic Palace.

The pontiff already had prepared his homily for New Year's Eve. A Vatican cardinal filling in for him read it aloud during the evening vespers service.

The service traditionally gives thanks for the year just ending. In his homily, Francis wondered if it “seems forced to thank God at the end of a year such as this, marked by the pandemic.”

"Thoughts go to the families who have lost one or more family members. We think of those who had been ill, to all those who suffered loneliness, to those who lost jobs,'' Francis wrote in the homily, delivered by Cardinal Giovanni Battista Re, the dean of the College of Cardinals.

Francis encouraged Roman Catholic faithful trying to make sense out of 2020 to banish any idea that God is “cynical and pitiless."

Instead, the pope cited the oft-told Gospel parable of the good Samaritan, and gave it a pandemic twist.

“The good Samaritan, when he comes upon that poor man, half-dead, on the edge of the road, doesn't give a speech to explain to him the sense of what happened to him, perhaps to convince him that in the end it was good for him," Francis wrote. "The Samaritan, moved by compassion, bends down by that stranger, treating him like a brother and took care of him, doing all that was in his possibilities.”

Francis then thanked God for all those who helped others during the COVID-19 pandemic without making a fuss of it. He said doctors, nurses and volunteers on the front line deserve “our prayers and our recognition.” He expressed gratitude to school officials and teachers “who must face a very complex situation” in the pandemic.

To discourage crowds in St. Peter's Square during a COVID-19 surge in Italy, Francis lately has moved his weekly and holiday blessing appearances inside the Vatican instead of greeting faithful from a palace window overlooking the square.