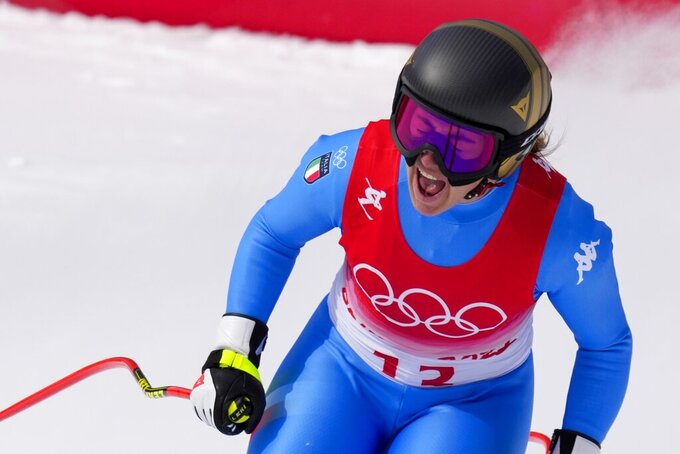 Sofia Goggia, of Italy, celebrates after finishing the women's downhill at the 2022 Winter Olympics, Tuesday, Feb. 15, 2022, in the Yanqing district of Beijing. (AP Photo/Luca Bruno)

BEIJING (AP) — The most difficult moment for Alpine racer Sofia Goggia — aside, of course, from the crash itself that partially tore a ligament in her left knee and put what Italy’s team called a “minor fracture” in that leg — came when she put on her skis for the first time after arriving in China for the Olympics.

That was 16 days after getting injured. And it was a week before she would be defending her 2018 gold medal in the downhill. Well, at that point, Goggia merely was hoping she would feel well enough to be able to give it a try Tuesday.

“I knew I needed to make enormous progress. I was almost afraid just to free ski. Afraid to trust my leg. Afraid to trust myself again. My knee still didn’t feel well,” Goggia said, explaining that everything got much worse three gates into her initial practice session, when she fell and slid into the safety netting.

“A huge blow, psychologically. I got up. My whole leg was shaking. I thought I made the situation worse. Turned out not,” Goggia said. “When I got up, I told (coach Gianluca Rulfi): ‘I don’t know if I can do this.’”

Not only was she in the starting gate Tuesday at the National Alpine Skiing Center — something Mikaela Shiffrin called “unbelievable” — but Goggia managed to perform well enough on that occasionally painful bad leg to earn a silver medal, finishing just 0.16 seconds behind champion Corinne Suter of Switzerland. Another Italian, Nadia Delago, was third.

Asked whether this was the greatest success of her career, Goggia replied: “Subjectively? Yes. Objectively, based on the color of the medal? No. But for what led up to it? Yes.”

When she crossed the line as the 13th racer down the course known as The Rock, Goggia saw that she had the best time so far, leaned over and screamed for joy.

Somehow, some way, she had a shot at becoming only the second woman in Olympic history to win consecutive golds in the downhill. And a chance to extend quite a streak: Goggia had won the last eight World Cup downhills she completed, a streak that began in December 2020.

Except, two skiers later, the 27-year-old Suter posted what would stand up as the best time, 1 minute, 31.87 seconds.

“You want to be as fast as them,” Suter said, “and then you push every day.”

After a fall during preseason World Cup training in September, Suter said, she was in constant pain and used crutches for a month.

Goggia was told she needed to use crutches for at least 10 days after her crash on Jan. 23 during a super-G World Cup stop at Cortina d’Ampezzo, Italy. No way that was happening, she decided. That would leave nowhere near enough time to recuperate. So three days it was.

“I don’t think anybody, maybe, knows the full details of her injury. But it’s a significant injury,” said Shiffrin, who was 18th, 2.49 seconds off Suter’s pace and one spot behind U.S. teammate Keely Cashman. “And it feels a little bit impossible that she got here and got everything together to be able to race in this downhill. And she has a silver medal.”

Goggia got to Beijing on Feb. 7, three days after the opening ceremony, flying from Milan with a group that included Canadian skier Marie-Michele Gagnon. Goggia shared details of her “exhausting” rehabilitation during their plane ride and on the bus from the airport in China.

“Huge respect for her. She can do this; no one else can do this. Only Sofia can do this,” Gagnon, who was eighth Tuesday, said about Goggia’s quick return to the slopes — and to success. “And she knows it. She says it, too: ‘I know I come back stronger from injuries.’”

Still, given everything she’d been through to get there, Goggia did not deny she was a little crestfallen to miss out on another gold.

She didn’t feel her fastest on this trip down the hill. Maybe it was the way her left knee hurt when she tried to get into a deep crouch during one substantial right-to-left turn. Maybe it was the wind slowing her: The beginning of the race was delayed 30 minutes after gusts were measured topping 25 mph (40 kph), and some skiers put colorful strips of athletic tape on their cheeks to shield against a chill that felt like minus 15 degrees F (minus 25 degrees C).

“I have to say this was a hard period,” said Goggia, who missed last year's world championships because of an injury. “Today really was maybe the easiest day.”

Goggia was loudly cheered by members of Italy’s ski team staff. Media members from her country offered high-fives and hugs or stopped her to pose for selfies. She chatted on the phone with Vonn.

There also was a video call back home with Mom, who spoke up loudly enough to tell reporters about Goggia’s “incredible personal growth that I’m very proud of.”

After the medal ceremony, Suter, Delago and Goggia posed for photographers. Goggia knelt down on the snow with her right knee; she bent her left knee and draped her silver over it.

She rose and limped across the snow.

A journalist wanted to know if Goggia was dedicating this performance to someone special.

Then she thought better of it.

“Me,” she said, laying her palm on her chest. “Myself. I was the one in the starting gate.”