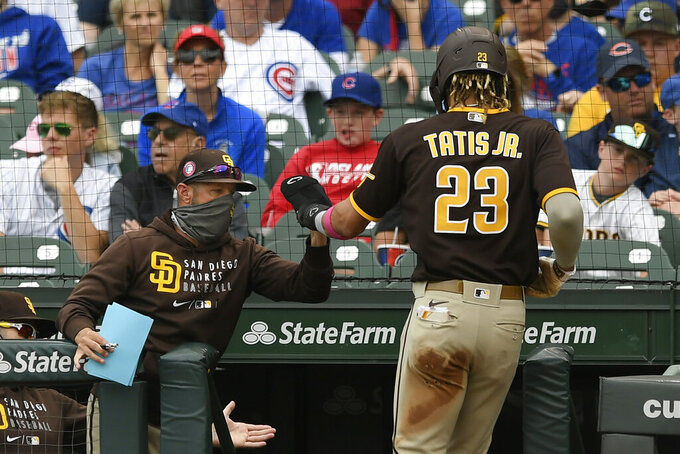 San Diego Padres' Fernando Tatis Jr. (23) celebrates with manager Jayce Tingler, left, at the dugout after scoring on a Wil Myers single during the second inning of a baseball game against the Chicago Cubs on Monday, May 31, 2021, in Chicago. (AP Photo/Paul Beaty)

CHICAGO (AP) — Javier Báez popped out of the dugout for a curtain call, acknowledging the continued chants of “Ja-vy! Ja-vy!” from the crowd at Wrigley Field.

For the dynamic shortstop, it was just like old times.

The 28-year-old Báez talked openly last year about how much he missed playing in front of fans during the pandemic-shortened season. With Wrigley allowed to host 60% of its capacity at the moment, producing a charged crowd of 24,824 for the series opener against Fernando Tatis Jr. and the Padres, Báez soaked in the atmosphere once again.

“Oh yeah. It feels great. It feels like a playoff game,” Báez said, “especially playing against these guys.”

Pressed into action after Trevor Williams had an appendectomy Sunday morning, Stewart pitched five innings of one-run ball in his first major league win since July 21, 2019, for Minnesota against Oakland. Stewart (1-0) opted out of last season because of the COVID-19 pandemic.

“I thought Kohl did a really nice job (of) mixing his pitches, attacking them,” manager David Ross said. “I love the rhythm he had, the aggressiveness, the pace of his delivery.”

Kris Bryant also went deep as Chicago capped a 19-8 May with its seventh win in eight games. Bryant went 2 for 4 while extending his hitting streak to 13 games, one shy of his career high.

San Diego dropped to 4-4 on its 10-game road trip. Tatis hit his 16th homer and Wil Myers drove in a run, but that was it for the Padres.

"It felt like a good day to hit, and you've got to give them credit, they made pitches,” Padres manager Jayce Tingler said.

Chris Paddack was tagged for five runs and six hits in 4 1/3 innings in his first loss since April 27. The right-hander struck out six and walked one.

Joe Musgrove was slated to start the series opener at Chicago, but he saved San Diego's weary bullpen by working five hitless innings Sunday in relief of Blake Snell. That led to Tingler turning to Paddack (2-4) on regular rest.

“Some of the pitches that I made with two strikes I thought could have been better,” Paddack said.

Báez committed a throwing error in the second that set up Myers' RBI single. But he atoned for the miscue in the third, crushing a massive drive that traveled an estimated 455 feet.

Báez took a good long look as his 12th homer soared over the wall in center. He added a solo shot in the seventh, leading to the curtain call.

Bryant's two-run shot in the fifth lifted the Cubs to a 5-1 lead and obliterated a fan's beer when he tried to catch the ball with his cup before it landed in the basket in right. Wisdom connected for solo drives in the fourth and sixth in his first career multihomer game.

It was more than enough for the 26-year-old Stewart, who was recalled from Triple-A Iowa when Williams was placed on the 10-day injured list before the game. Stewart threw 64 pitches, 37 for strikes.

Stewart said he feels “extremely blessed” to play for the Cubs after agreeing to a one-year contract with the team in free agency.

Padres: 3B Manny Machado returned to the starting lineup after resting on Sunday. The slugger has been dealing with a sore left shoulder.

Cubs: 1B Anthony Rizzo was out of the starting lineup for the sixth consecutive game because of back tightness. But Rizzo took some swings and fielded grounders before the matchup with the Padres. OFs Jason Heyward (left hamstring strain) and Jake Marisnick (right hamstring strain) also worked out on the field.

Left-hander Ryan Weathers (2-1, 1.31 ERA) and right-hander Kyle Hendricks (5-4, 4.63 ERA) pitch on Tuesday night. Weathers tossed four scoreless innings for San Diego in a no-decision at Milwaukee on Thursday. Hendricks is coming off a strong May for Chicago, going 4-1 with a 2.67 ERA in five starts.