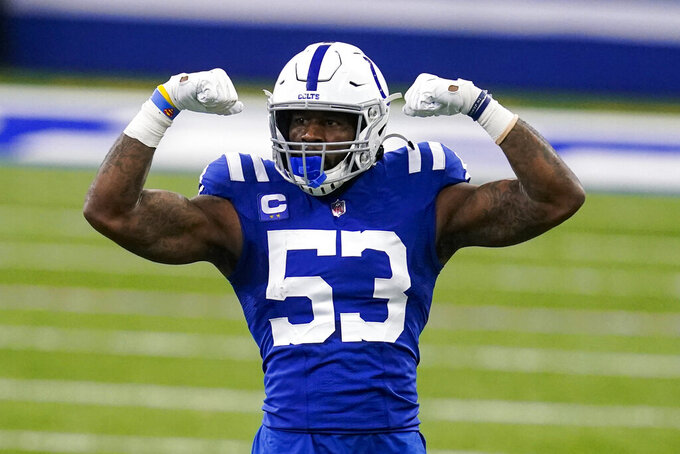 FILE - Indianapolis Colts outside linebacker Darius Leonard (53) celebrates a defensive stop against the Tennessee Titans in the first half of an NFL football game in Indianapolis, in this Sunday, Nov. 29, 2020, file photo. Leonard was selected Friday, Jan. 8, 2021, to The Associated Press All-Pro Team. (AP Photo/Darron Cummings, File)

Coach Frank Reich wants Philip Rivers back as the starting quarterback next fall. Two-time All-Pro linebacker Darius Leonard wants another chance to get Rivers his missing Super Bowl ring. So do Leonard's teammates.

Now, the Colts general manager may be on board, too. Ballard said Thursday he believes the 39-year-old quarterback can keep winning games and perhaps even a championship — if he chooses to come back.

“Do I think Philip can still play? Absolutely I do," Ballard said on a season-ending Zoom call. “Philip and I had an hour talk yesterday. He’s going to take time and we’re going to take some time, and we’ll meet here in about a month and figure out which way we're going to go forward. Look, Philip needs to make a decision about if he for sure wants to play. Do I think Philip Rivers is a winning quarterback that we can win and go to the Super Bowl with? Absolutely I do."

Rivers was emotional at times following Saturday's 27-24 postseason loss to Buffalo, though he gave no indication he would retire after his 17th season in the league.

He played better as the season went on, which might have been expected because he joined a new team and had almost no offseason work with his new receivers due to the COVID-19 pandemic. Through Indy's first five games, Rivers threw five interceptions and four TD passes. Over the final 12, he had 22 TD passes and six interceptions.

Rivers finished 2020 with the second-highest completion percentage of his career (68%) while leading the Colts to an 11-5 mark and their second playoff appearance since 2015.

But he played the final seven games with an injured toe on his right foot. Ballard said Rivers was scheduled to meet with doctors Thursday about whether to have surgery.

He already has a new gig lined up, too: head coach at St. Michael Catholic High School in Fairhope, Alabama.

Rivers said his answer will hinge on one factor.

“Whatever God’s will is for me and my family," he said Saturday. “If it’s here in Indy playing another year then we’ll be here, and if it’s not, I’ll be on the sidelines with a ballcap coaching the heck out of a high school football team down in south Alabama."

Ballard is willing to wait a few weeks to sort it out as he puts together the annual offseason to-do list. This time could be different.

Ballard will look for a potential long-term successor for Rivers, who ranks fifth on NFL career lists for completions, yards passing and TD passes and has started 252 consecutive games including the playoffs.

Rivers' one-year deal is expiring and Jacoby Brissett appears likely to leave in free agency after being demoted from starter in 2019 to backup last season. That leaves Jacob Eason, a fourth-round draft pick in April, as the only Indy quarterback under contract.

Rumors have swirled for weeks about possible trades, including for Carson Wentz, who Reich coached in Philadelphia. Others think Ballard will take one of the five quarterbacks projected to go in the first round in April. Indy has the No. 21 selection.

And while Ballard would like to bring back everyone, he realizes it's unrealistic.

But Ballard knows it all starts at quarterback.

“If Philip had five years left, this wouldn’t be a discussion, but (with just) one, maybe two, you need to make sure you explore everything out there," Ballard said. “We get the importance of the quarterback position, but the difference between just taking one and taking the right one is the key in our minds."