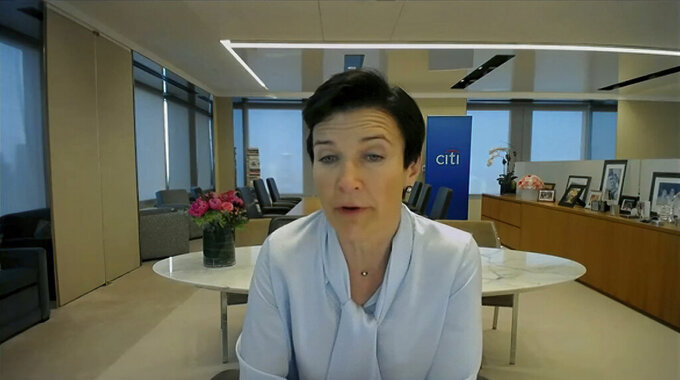 WASHINGTON (AP) — The CEOs of the six biggest U.S. banks went before Congress Wednesday, eager to lay out their support for struggling consumers and small businesses hard hit by the pandemic.

But lawmakers focused more keenly in a Senate hearing on the contentious social and political issues dividing the country.

Climate change, voting rights and racial inequity animated the debate and questioning of the executives in a hearing by the Senate Banking Committee. Democrats demanded the Wall Street powerhouses do more to help struggling minority communities. Republicans warned against promoting social activism through banking practices.

“Profits have gone up, stock prices have soared, your own compensation is stratospheric — but workers get a smaller and smaller share of the wealth they create and they’re working harder than ever,” Democratic Sen. Sherrod Brown of Ohio, the committee chairman, told the CEOs. “We have a racial wealth and income gap that has barely budged since we passed the Civil Rights Act. Prove to us that you are going to use your positions to ... make our economy work for everyone — not just CEOs and the wealthy.”

Sen. Pat Toomey of Pennsylvania, the panel’s senior Republican, said the banking industry showed remarkable resilience during the pandemic recession as he mounted a robust defense of capitalism. Toomey echoed an idea with growing cultural currency among conservatives, voicing concern about increased pressure on banks “to embrace wokeism” and promote social activism through their policies.

The chief executives of JPMorgan Chase, Citigroup, Wells Fargo, Bank of America, Morgan Stanley and Goldman Sachs appeared via video for the hearing by the Senate panel, which will be followed by a House committee session on Thursday.

The CEOs appeared as the U.S. economy is recovering from the recession. Big banks’ profits surged in the first three months of the year as the recovery took hold. They were able to release billions of dollars from their loan-loss reserves originally set aside in the early days of the pandemic last year.

The industry, which was blamed for the Great Recession more than a decade ago, has spent most of 2020 and this year trying to appear helpful and willing to work with borrowers and businesses. Banks across the country waived fees and put millions of mortgages into forbearance to shore up Americans’ distressed finances in the pandemic.

Most of the banks’ relief measures were meant to be temporary and are now going away. Senators pushed the CEOs to promise they would not force anyone into foreclosure or bankruptcy resulting from pandemic hardship after the measures expired. Democratic senators also pushed hard on what banks are doing to increase diversity in their ranks, and to address wealth inequality between Black and Latino households and white households.

“You’ve heard from everyone on this panel that we’re trying to do more,” said JPMorgan Chase CEO Jamie Dimon, in response to questions on how well banks were doing in lending to minorities and the poor.

Challenged by Brown on the wide gulf between bank CEOs’ compensation and average employees’ pay, Dimon responded, “We’re very proud of the opportunities we give to all of our people.”

Sen. Elizabeth Warren, D-Mass., a longtime critic of the big banks, pushed hard on why they collected overdraft fees on checking accounts during the pandemic.

In a tense exchange, she called Dimon “the king of the overdraft fee,” maintaining that JPMorgan collects more than seven times in fees per account than its competitors.

Dimon disputed the accuracy of Warren's figures. The bank says that last year it waived fees on over 1 million deposit accounts, including overdraft fees, with no questions asked. JPMorgan Chase has an account called Secure Banking with no overdraft fee and says it makes other accommodations to customers in specific situations.

Warren said the past year “has shown that corporate profits are more important to your bank” than helping struggling people.

Republicans, now in the minority in Congress after the latest national elections, renewed their warnings against seeking new regulations for the banking industry as a solution to problems. They praised programs created by Congress last year and renewed in early 2021 such as the Paycheck Protection Program that has funneled hundreds of billions in forgivable loans to small businesses. U.S. banks helped distribute more than $700 billion in loans under the program through late May.

Sen. Tim Scott, R-S.C., challenged some of the CEOs on their public opposition to Georgia’s new Republican election law. Critics say the sweeping rewrite of Georgia’s election rules will restrict voting access, especially for voters of color, and it has become a flashpoint in the polarized political battle cleaving the country.