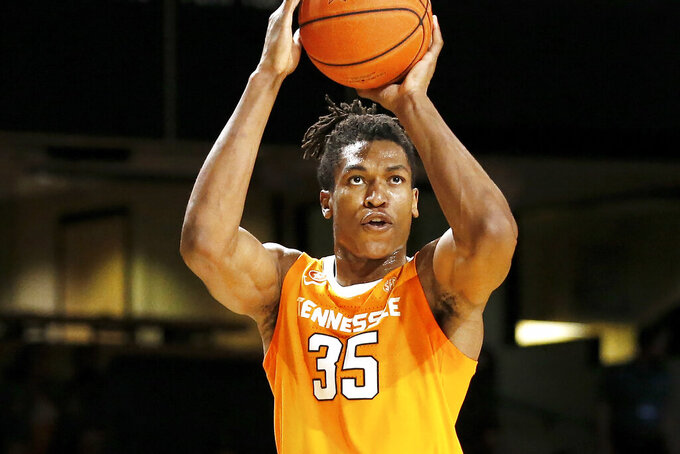 FILE — In this Jan. 18, 2020, file photo, Tennessee guard Yves Pons plays against Vanderbilt in an NCAA college basketball game in Nashville, Tenn. The combination of experience and talent has raised expectations that Tennessee can win the SEC regular season title for the second time in four seasons and maybe even think of the program's first Final Four. (AP Photo/Mark Humphrey, File)

Tennessee coach Rick Barnes has restocked the roster so well that the 12th-ranked Volunteers should quickly erase the painful memory of last season once play begins.

After reaching the Sweet 16 in 2019, the Vols went 17-14 after the departure of Grant Williams and Admiral Schofield to the NBA. They then lost Lamonte Turner to a season-ending shoulder injury.

Now Barnes has a group of freshman ranked fourth nationally with a pair of five-star recruits in Keon Johnson and Jaden Springer, and a four-star power forward in Corey Walker. Yves Pons, the Southeastern Conference's defensive player of the year, also is back after studying his NBA options.

The combination of experience and talent has raised expectations that Tennessee can win the SEC regular season title for the second time in four seasons and maybe even think of the program's first Final Four.

Not that the Volunteers are talking about that.

“I know we rank somewhere high, but I try not to think about it because I feel it’s going to put pressure on us that is not needed," guard Santiago Vescovi said. “I know there are people that expect a lot from us and I know more people are going to come ready to play us, so we have to be ready for them.”

The athletic guard from Fuveau, France, Pons tied the school record with 73 blocks despite the season ending before the Vols played in the SEC tournament. He led the league and was 24th nationally blocking 2.4 shots a game. Senior forward John Fulkerson also is back, and he finished the season averaging 18.3 points a game last season over the final 10 games.

A year ago, the Vols found themselves looking for help at point guard after Turner's injured shoulder ended his season early. It's why Vescovi started his first game after being cleared to play.

Now Barnes has his pick. Vescovi is back and leaner after spending much of the offseason in Uruguay due to the pandemic. Johnson and Springer have shown they can play the spot. Sophomore Josiah-Jordan James has learned more too, and redshirt junior Victor Bailey Jr. also has practiced there due to contact tracing.

“It’s been a long time since we’ve had four or five guys that can play that spot,” Barnes said. "Obviously some are further along than others, but they’re going to get there.”

“It’s something we’ve really made a conscious effort on to know that we have to be better there,” Barnes said.

Barnes not only has the pair of five-star recruits, Bailey finally is available after sitting out last season following his transfer from Oregon. The 6-4 guard averaged 7.4 points and shot 39.8% from 3-point range during his last season at Oregon and is looking forward to finally playing in the SEC.

Bailey spent the past year working to get stronger, saying he was inspired to work hard after seeing how big the Vols looked to him at the Sweet 16 in March 2019.

The coronavirus pandemic wiped out games like a planned season opener against Wisconsin, a game with Memphis in Nashville and No. 1 Gonzaga. The Vols currently have their 18-game SEC schedule with seven non-conference games hoping to add a couple more games to reach 27 for the season.

They open Nov. 25 hosting Charlotte as part of a three-team, round-robin called “The Volunteer Classic.” The highlight is a visit from No. 6 Kansas on Jan. 30 in the Big 12/SEC Challenge after Tennessee lost 74-68 on the road to the Jayhawks last season.

With a 4,000 cap on attendance, the Jayhawks won't have to deal with a packed gym and a loud road atmosphere.

“We were hoping a year ago when we left Kansas that we would get to play them again,” Barnes said. “We wish they could get the full experience of Thompson-Boling arena. I think when a team like that comes in, I don’t think there’s any better arena in the country."