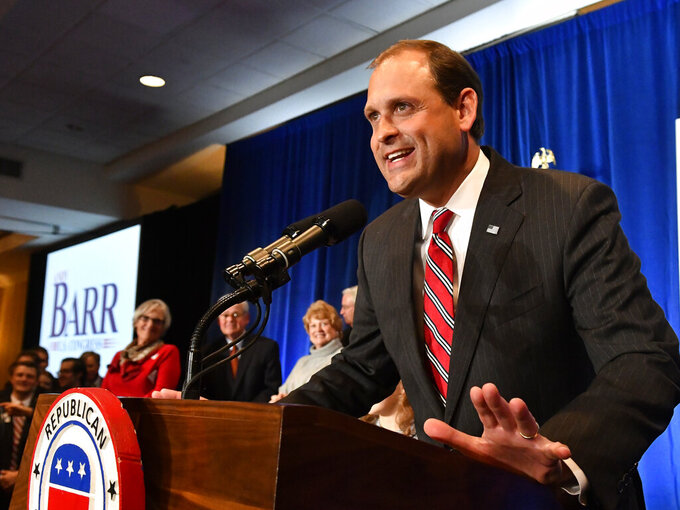 FILE - In this Tuesday, Nov. 6, 2018, file photo, Rep. Andy Barr, R-Ky., speaks to supporters at his victory celebration in Lexington, Ky. Kentucky's 6th District has lived up to its reputation as a political battleground with the current slugfest between Barr and Democratic challenger Josh Hicks.(AP Photo/Timothy D. Easley, File)

FRANKFORT, Ky. (AP) — Kentucky's 6th District has lived up to its reputation as a political battleground with the current slugfest between Republican U.S. Rep. Andy Barr and Democratic challenger Josh Hicks.

Attack ads have blanketed the district, and their only debate turned acrimonious as each man accused the other of distortions or outright lies. Their policy differences — highlighted by conflicting views on health care policy — sparked contentious exchanges.

It's added up to a bitter campaign between the Republican congressman and his ex-Marine challenger. Their messages vary as much as the district itself, which includes the thoroughbred farms of bluegrass country and the Appalachian foothills of east-central Kentucky.

The campaign also has been touched by personal tragedy and hardship for both men. Barr’s wife died unexpectedly, shortly before the primaries in June, and the congressman delivered an emotional eulogy. Hicks said recently that he is dealing with a serious family health emergency.

For decades, the 6th District swung back-and-forth between GOP and Democratic representation, though Barr is now seeking his fifth term. Barr is viewed as the favorite, but Democrats see an upset opportunity for Hicks. Two years ago, the conservative congressman staved off a strong challenge from Democrat Amy McGrath, who is running against Republican Senate Majority Leader Mitch McConnell this year.

Barr, who ousted a Democratic incumbent in 2012 to win the seat initially, defends his record in Congress, saying: “I am doing the job. I am delivering results. And I’m doing it in a bipartisan way."

A prime example, he said, is his work on House-passed legislation to create national medication and safety standards for the horse racing industry — a signature business in the district.

Hicks, a Lexington attorney, plays up his rural roots in the rolling hills of Fleming County and his background as a Marine and police officer. The former Republican left the GOP because he sees its policies as favoring corporate interests, and he's continued that theme with a populist message.

In a state with high disease rates, the Affordable Care Act has been a flashpoint in the campaign.

Barr went on the offensive with a series of attack ads, including one spotlighting a couple of medical-related lawsuits filed by Hicks. The suits came well before COVID-19 struck, and Hicks accused Barr of trying to mislead voters into thinking he profited from the pandemic. Barr referenced the ad in their debate, and Hicks heatedly responded: “That's a pathetic lie."

At a recent campaign stop, Hicks asked supporters if they were “tired of seeing the meanness” that he said has infected politics.

Flexing his incumbency, Barr has pointed to the flow of federal money into the district to fight the opioid epidemic, improve transportation and support local governments.

Hicks countered that the district's drug woes remain and infrastructure needs have gone unmet, including broadband access, saying, “More than 50 years after we put a man on the moon, my nephews in Fleming County don't have broadband internet." Barr counters that he's voted for broadband funding and pushed legislation to expand the service into more rural areas.

Barr's aggression on the airwaves has raised some questions about the state of the race.

“You just have to judge from the ads that Barr feels like Hicks is a threat," said longtime Kentucky political commentator Al Cross.

Hicks hasn't raised as much as McGrath did two years ago, but he's still been a fixture on TV with his own ads. He could benefit from a more motivated Democratic base that will likely turn out in higher numbers this year than for the 2018 midterm election, Cross said. The district includes Lexington, the state's second-largest city and the key to any Democratic hopes of winning the seat.

“While this race hasn't made any national lists, I would not be shocked to see Hicks win," Cross said. “I would be surprised to see him win. Because Barr really hasn't done anything to raise the ire of voters, other than some of these outlandish ads, which tend not to be voting issues anyway."

Kentucky's other Republican congressmen — Hal Rogers, James Comer, Brett Guthrie and Thomas Massie — are heavily favored to retain their seats this year, as is the only Democrat in the state's congressional delegation — John Yarmuth.