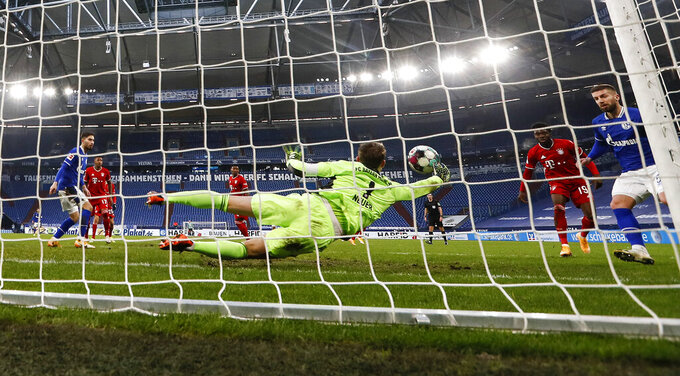 GELSENKIRCHEN, Germany (AP) — Bayern Munich extended its German league lead to seven points as Robert Lewandowski scored for the eighth Bundesliga game in a row to earn a 4-0 win over last-place Schalke on Sunday.

After title rivals Leipzig, Bayer Leverkusen and Borussia Dortmund all lost earlier in the weekend, three assists from Joshua Kimmich took Bayern a step closer toward what would be its record-extending ninth consecutive Bundesliga title.

“We've made good use of this round of games because our competitors gave us an opportunity and we converted it,” said Bayern coach Hansi Flick, whose team has won three games in eight days. “We have a bit of a cushion but it’s important that we approach each game as we’ve approached the last few games.”

Kimmich put Bayern on track for the win with a superb 33rd-minute cross which left Thomas Müller needing only a simple headed finish to score the opening goal. Kimmich also set up Lewandowski in the 54th when the Polish striker beat defender Ozan Kabak before scoring his 23rd goal in 17 Bundesliga games this season.

Müller headed in another goal in the 89th off a Kimmich free kick, and David Alaba made it 4-0 soon after from long range.

Bayern had goalkeeper Manuel Neuer to thank as the team recorded back-to-back shutouts in the league for the first time this season. Neuer made a series of saves in the first half and showed fast reactions to parry an angled header from Mark Uth in the 11th as Schalke threatened to score first.

Despite Bayern's two late goals, it was a far closer game than Bayern's 8-0 hammering of Schalke on the opening day of the season in September, testament both to Schalke's recent improvement under new coach Christian Gross and to Bayern's own dip in form, with two rare defeats this month.

The German and European champion's punishing schedule will only intensify next month with a trip to the Club World Cup in Qatar and a Champions League last-16 game against Lazio.

Schalke is last in the league with seven points from 18 games and is 10 points from safety as it battles deep-seated financial problems worsened by the coronavirus pandemic. It has lost all three games since a hat trick from U.S. striker Matthew Hoppe led the team to a 4-0 win over Hoffenheim on Jan. 9 — the club's first league win in nearly a year.

Schalke was without new signing Klaas-Jan Huntelaar because the 37-year-old striker has a calf injury after returning to Schalke from Ajax, and defender Sead Kolasinac, on loan from Arsenal, has been sidelined with a thigh problem.

In the day's other game, Andrej Kramaric scored twice for the second game in a row as Hoffenheim comfortably beat Cologne 3-0 to move up two places to 11th. That took Kramaric to 11 goals for the season, despite missing several weeks due to a coronavirus infection, and 73 career goals in the Bundesliga, more than any other Croatian player, overtaking former Bayern forward Ivica Olic on 72. Cologne is 16th and in the relegation playoff spot.