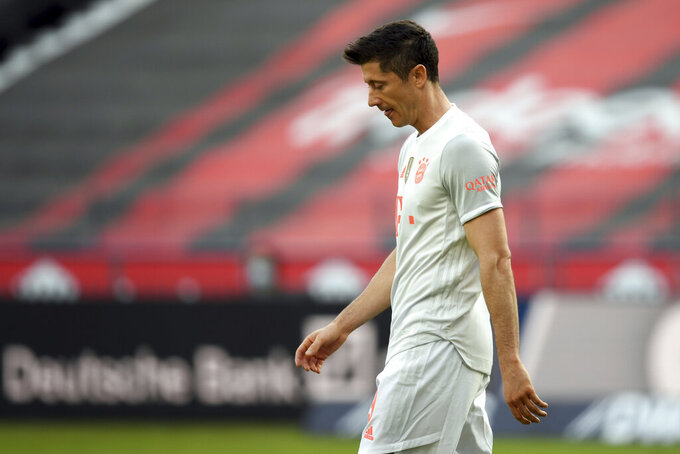 LONDON (AP) — The Champions League talking points ahead of the second set of first-leg matches in the round of 16 on Tuesday and Wednesday:

Defending champion Bayern Munich has mounting problems ahead of Tuesday's game. The coronavirus is having an adverse effect on the team with Thomas Müller and Benjamin Pavard out of the match in Rome, though Javi Martínez and Leon Goretzka have recovered. The latter made his comeback Saturday with a second-half appearance but couldn’t prevent Bayern from slumping to a 2-1 loss at Eintracht Frankfurt, days after the Bavarian giant was held 3-3 at home by relegation-threatened Arminia Bielefeld. French midfielder Corentin Tolisso is also out after tearing a muscle in training last week. Five dropped points over two Bundesliga games has given rivals hope and increases the pressure on Bayern’s tired players after their punishing schedule including a Club World Cup appearance in Qatar. Lazio is in good form ahead of its first appearance in the knockout stage for 20 years. The Italian club struggled more than expected against Sampdoria but saw out a 1-0 win to claim its seventh victory in eight Serie A matches. Its injury problems are easing but defenders Ștefan Radu and Luiz Felipe and goalkeeper Thomas Strakosha are all still out.

Atlético arrives for the match after having lost its shine in the Spanish league. Diego Simeone’s side rode a scoring streak by Luis Suárez to take a commanding lead but it has stumbled with only one win in its last four rounds. Simeone has moved away from his standard 4-4-2 formation, which Atlético used to topple then defending European champion Liverpool last season. Now Simeone favors a three-man backline and uses two high wing backs to support Suárez and João Félix in attack. Winger Yannick Carrasco, however, is doubtful for Tuesday's match so that may alter his strategy. Thomas Tuchel has yet to lose any of his seven matches in charge since taking over as Chelsea manager at the end of January. His approach is already clear — high wing backs, two sitting midfielders, two inside forwards supporting the striker — and it has made Chelsea much harder to beat compared to the side under his predecessor, Frank Lampard. The team has hardly been free-flowing, however, and goals might be hard to come by against Atletico's famously tough defense. The first leg is taking place in Bucharest, Romania, because of travel restrictions preventing visitors from Britain entering Spain.

Real Madrid is hoping that Karim Benzema will be fit to play on Wednesday after trouble with an ankle ruled him out of the weekend’s Spanish league match. Benzema leads Madrid with 17 goals scored across all competitions and does not have a clear backup after the team let Luka Jovic go this winter. The rarely used Mariano Díaz started Saturday’s game at Valladolid, but the team had to rely on holding midfielder Casemiro to get the only goal of the 1-0 win. Zinedine Zidane replaced Díaz after an hour with reserve team player Hugo Duro. Madrid is also missing injured captain Sergio Ramos who is out with a left-knee injury. Atalanta will have poignant memories of the same stage last season. The Champions League outsider beat Valencia 4-1 in the first leg but the joy was shortlived as, days later, Bergamo became the epicenter of the coronavirus pandemic. The match was dubbed “Game Zero” by media. Atalanta will have to put those thoughts to one side, however, and it will be full of confidence after an impressive performance saw it beat Napoli 4-2 in Serie A. Luis Muriel was inspirational as he scored a stunner and also had a hand in Atalanta's other three goals.

The two teams' seasons are heading in opposite directions going into what would appear a mismatch for a game taking place in Budapest, Hungary, due to Germany’s pandemic-linked ban on visitors from Britain. City is on an 18-match winning run in all competitions. The Premier League title is seemingly a formality now, thanks to a 10-point lead. Pep Guardiola can really start to focus on the Champions League where a title has proved elusive despite the club's heavy spending over the last decade. While City is in the round of 16 for the eighth straight season, it will be Mönchengladbach’s first knockout match in the competition outside qualifying in 43 years. Its promising season is in danger of unraveling following news of Marco Rose’s departure as coach. Gladbach ended ongoing speculation over Rose’s future by announcing that he will join league rival Borussia Dortmund next season and the team responded with a 2-1 loss at home to struggling Mainz on Saturday. Gladbach now has only one win from its last five games.