Bears' chairman wants to talk to Urlacher about posts 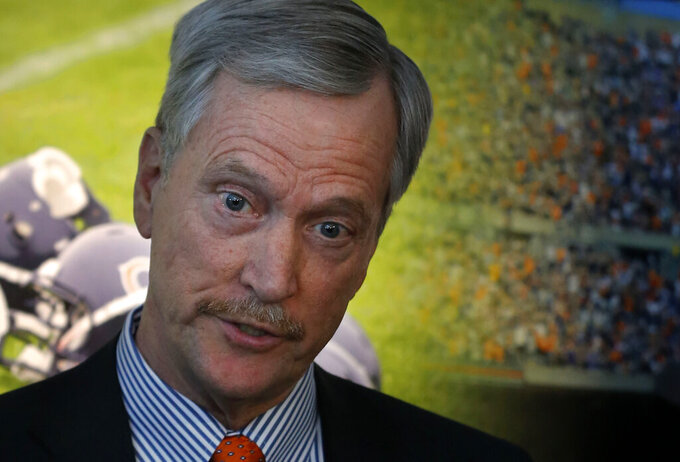 The eye-opening posts just didn't mesh with the man he knows. And until they talk, McCaskey is reserving judgment.

"Brian is an outstanding individual,” McCaskey said Thursday. “He was a great Bear and I’ve known him for 20 years. We’ve shared a lot of triumph and some tragedy during that time. I lost my dad, he lost his mom.”

Addressing the media ahead of the opener at Detroit, McCaskey touched on a wide range of subjects. He sidestepped questions about general manager Ryan Pace's future coming off a disappointing 8-8 season.

He said he has spent almost no time at Halas Hall since the coronavirus shutdown in March. The Bears are “very optimistic” they will have fans at Soldier Field this season. And the pandemic won't stop his 97-year-old mom and team matriarch Virginia McCaskey from attending games, including the opener.

As for Urlacher, McCaskey said the Bears have reached out to him. He would like to talk to their former star linebacker about his Instagram activity last month in the wake of the police shooting of Jacob Blake in Kenosha, Wisconsin.

Urlacher grabbed headlines and irritated some teammates when he liked a post supporting Kyle Rittenhouse, the 17-year-old from Illinois who fatally shot two demonstrators in Kenosha protesting Blake's shooting. He also criticized protests by NBA players.

“Brett Favre played the MNF game the day his dad died, threw 4 TDs in the first half and was a legend for playing in the face of adversity,” Urlacher posted. “NBA players boycott the playoffs because a dude reaching for a knife, wanted on (a) felony sexual assault warrant, was shot by police.”

A day after his father Irv died of a heart attack, Favre threw four touchdowns to lead Green Bay over Oakland on a Monday night late in the 2003 season.

“He’s been a great teammate and you know one of my favorite things about Brian is we have a program called home team handoff where players can buy tickets to home games and donate them,” McCaskey said. “And Brian seemed to take it as a matter of pride each year to be the player who had the most home team handoff tickets. And because of his generosity thousands of kids who might otherwise have not had the opportunity to attend a Bears home game got the chance. So having known him for 20 years and knowing the type of person he is, I’m not going to judge him until I talk to him.”

Meanwhile, McCaskey said Pace will be judged on his leadership of the football operation, his supervision of the personnel department. And, of course, wins.

The Bears went from winning the NFC North in 2018 to missing the playoffs for the eighth time in nine years.

They traded for Super Bowl 52 MVP Nick Foles to compete with quarterback Mitchell Trubisky for the starting job. Trubisky won that competition, though he figures to be on a short leash.

McCaskey said he hadn't met Foles in person. The chairman made just his second appearance at Halas Hall since March on Thursday.

McCaskey also said the Bears submitted a plan to Chicago for allowing fans at Soldier Field. But the city is waiting for COVID-19 case numbers to shrink.

The Illinois Department of Public Health on Wednesday reported a 3.7% seven-day positive test rate in the state, the first time it dipped below 4% since the end of July. But the 30 deaths were the highest number of reported fatalities in a week.

Though stadiums in Illinois are allowed to operate at 20% capacity with social distancing and face coverings required, Chicago has not given the green light for teams to admit fans at games.

“We’re not gonna push for fans," McCaskey said. "We’re gonna continue to work cooperatively with the city. And when the Bears and the city are comfortable that it’s safe and appropriate to have spectators at Soldier Field, that’s when we’re gonna do it."

NOTES: Nagy made it clear he won't reveal many details on injuries, declining to say how serious LB Robert Quinn's ankle injury is or when it happened. He did say it was unrelated to his “ramp up” after missing time for personal reasons. Quinn did not practice Thursday, while LB Khalil Mack (knee), RB David Montgomery (groin) and WR Cordarrelle Patterson (knee) were limited.