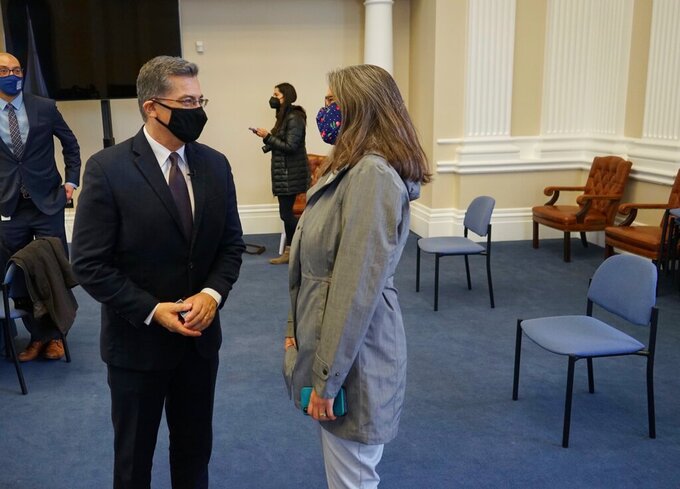 CARSON CITY, Nev. (AP) — In his first trip since being confirmed, U.S. Health and Human Services Secretary Xavier Becerra visited Nevada on Tuesday to talk up the Affordable Care Act and efforts underway to expand coverage and reduce the cost of health care.

The secretary is one of several surrogates that President Joe Biden dispatched to drum up support for his $1.9 trillion coronavirus relief package, which includes funding for people who lost health care coverage amid the pandemic. The package builds on the Affordable Care Act by expanding tax credits and subsidies to lower health care costs.

“I hope Nevadans take full advantage of what it does to help middle class families on the edge" during the pandemic, he said.

Biden's COVID-19 relief package, the biggest expansion in federal aid since the Affordable Care Act, cuts premiums paid by a hypothetical 64-year-old making $58,000 from $1,075 a month to about $413, based on Congressional Budget Office estimates. People who have even a brief spell of unemployment this year can get a standard plan for zero premium and reduced copays and deductibles. Much of the bill is tied to the pandemic and set to expire in 2022.

At a Carson City health center, Becerra announced an extension of the special enrollment period for the federal health insurance marketplace to Aug. 15. Health officials hope that prolonging the deadline by three months will allow people without insurance to enroll and take advantage of the new policies.

“The American Rescue Plan that just passed out of Congress helps reduce dramatically the cost of premiums that you get under the Affordable Care Act, so please take advantage,” Becerra told a roundtable of residents gathered at a Carson City health center to discuss how getting coverage affected their lives.

Republicans, who have decried the American Rescue Plan's high price tag, pushed back on Democrats' efforts to drum up support for the package in the western swing state. Republican National Committee spokesman Michael Joyce called the roundtable a "slap in the face of Nevadans.”

“The Democrats think people wouldn’t notice the funding going towards projects that have nothing to do with combating COVID-19," he said in a statement.

Former Gov. Brian Sandoval was one of the few Republican governors to create a state-based exchange and expand Medicaid under the Affordable Care Act. The law made people with slightly more income eligible for Medicaid and reduced the size of Nevada’s uninsured population drastically.

Sandoval on Tuesday called the decision one of the most important he made as governor and said the politics “were not as complicated as one would think.” State lawmakers from both parties supported his approach due to Nevada's high uninsured rate, he said.

“States with high numbers of uninsured low-income individuals need to look at remedies that include furthering, and not eliminating, many of the critical payments from the federal government that help insurance companies offer affordable coverage to lower-income Americans in the first place. If we don’t do this, the impact, particularly in a post-pandemic America, could be devastating,” Sandoval said in a statement.

Many more Nevadans are insured now than a decade ago, but the state still has one of the country's highest uninsured rates; 13.9% of the non-elderly population lacked coverage as of 2019, according to a federal report released last month.

Black and Latino communities are uninsured at disproportionate rates, research from Las Vegas's Guinn Center for Policy Priorities found in 2019. Latinos accounted for 36% of Nevada's population but 59% of those uninsured. Roughly one-third of uninsured residents are non-citizens.

Since his days in Congress, Becerra has argued that the Affordable Care Act reduces racial and ethnic disparities in health care. On Wednesday, Becerra promised that Biden's stimulus package and broader agenda aims to reduce disparities.

“The Latino community was perhaps the most uninsured in America. As a result of the Affordable Care Act, a big number of them were able to access care, so they benefited tremendously — as have communities throughout the country,” he said. “I think President Biden has made it very clear. He’s going to try to go to every corner of the country to make sure that populations that have been missed or have been hard to reach get this type of access.”

Nevada’s state-based exchange enrolled 81,903 residents in 2020 and expects more to sign up for insurance plans from now until Aug. 15.