BEIJING DIARY: A taste of Tibet with Chinese characteristics 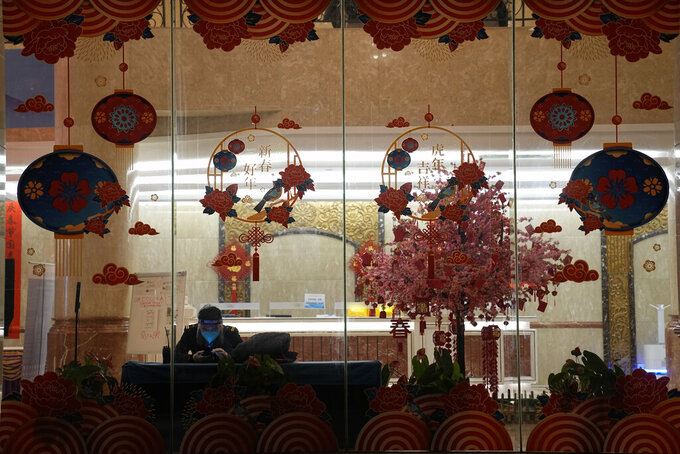 BEIJING (AP) — I can't visit Tibet while I'm in China working at the Beijing Winter Olympics. But China can show me its own version of the remote region.

China's “closed loop” system for the Games means it's almost impossible for any of the thousands of athletes, sports officials, journalists and media workers who have arrived from overseas to get out and see the country.

Games attendees are staying at dozens of hotels, all fenced off from the rest of Beijing and accessible only by bus or taxi to the press center, competition venues or the airport.

By chance, part of The Associated Press' Olympics team has been assigned to the Beijing Tibet Hotel, which has been built and outfitted to evoke the distant region on China's western edge.

I've traveled widely in China but have never been to Tibet, a long-isolated place that's always been hard for foreigners, especially journalists, to reach, well before pandemic travel restrictions. Foreign correspondents can only visit on government-organized tours. So I was curious to see what the hotel would be like.

China denies the allegations. The government says its modernization efforts have brought Tibet out of isolation, but critics say Tibetans have less say on building their future than Han Chinese migrants.

At the 2008 Summer Olympics in Beijing, Tibet was a flashpoint. Protesters disrupted the flame lighting ceremony and parts of the relay route.

I wondered what connection the hotel had to Tibet. A waitress at the hotel restaurant told me it was owned by the Tibet regional government. The hotel website revealed it was linked to a Tibetan government-owned company that also sells Tibetan medicine, food and handicrafts.

It's not unusual for Chinese regional or provincial governments to operate hotels in the capital. Other Olympic visitors are being put up at the Guizhou and Fujian hotels — provinces in the southwest and on the coast across from Taiwan.

The hotel's exterior walls gently slant inwards as they rise to the roof, an architectural feature reminiscent of the Potala Palace in the capital, Lhasa, the home of Tibet’s traditional Buddhist leaders. Elevator video screens play scenes of Tibetan landscapes on an endless loop.

Some of the Chinese writing, like the gold lettering for the coffee shop and banquet rooms, mimics the distinct angular style of Tibetan script.

Were these design touches a tasteful appreciation of Tibetan culture? Or Chinese-style cultural appropriation? It probably depends on whom you ask.

One of the hotel's two restaurants, Shambhala — a reference from Tibetan Buddhism to a mythical kingdom hidden in the Himalayas — is decorated with prayers wheels along one wall. It's closed during the Olympics because there aren't enough diners. The other restaurant features dishes with yak meat, a staple food on the Tibetan plateau, where yaks are native. At dinner one evening, I chose the yak stew. Tasted a lot like beef.

Missing from the menu were yak butter tea or tsampa (cereal made from barley flour), also Tibetan signature delicacies.

So far, it mostly seemed like a standard and fairly innocuous showcase of local culture. But there were signs of the Chinese Communist Party's grip on history.

In the unused conference room, I came across a portrait of Chinese leader Xi Jinping, with his name and party secretary title underneath in both Chinese and Tibetan.

And down one hallway, there's an extensive exhibition of Tibetan life under Chinese rule, explaining how Xi's strategy for Tibet will help the region “enter a New Era of socialism with Chinese characteristics.”

Pictures of Tibet's stunning scenery and people and displays of traditional garb are mixed with commentary on the Communist Party's role in modernization.

“The old Tibet was the purgatory for millions of serfs, who lived a miserable life," one section read. “The new Tibet is a happy paradise for the people."

Conspicuously absent are photos of the Dalai Lama, the exiled spiritual figure that many Tibetans claim allegiance to, but who is a target of scorn by Beijing. Neither are there images of the Panchen Lama, Tibetan Buddhism's second-highest figure. He went missing 25 years ago at the age of 6 after being picked by the Dalai Lama, after which China named another bo y to the position.

Instead, there are photos of Xi and historical shots of Communist Party bosses signing an agreement with Tibetan leaders in 1951. The unspoken message: It's Beijing who calls the shots.

Xi's visit to Tibet last year, the first by a Chinese leader in 30 years, reinforced that message.

But what did real Tibetans have to say? Were any actually working here? In previous Olympics, the lack of restrictions at least gave visitors more opportunity to meet and talk to local people.

Eventually, I found some Tibetans working in the hotel restaurant. One said they had been sent from their school in Tibet to work at the hotel for several months as they studied hospitality.

“Nice," she said, giving me a thumbs up.

Then the restaurant manager appeared with a message: If I had any questions, I should ask him.

Kelvin Chan covered Hong Kong for 7 1/2 years and is now an AP business writer in London. Follow him at http://twitter.com/chanman.