Bekele wary of new course in London showdown with Kipchoge 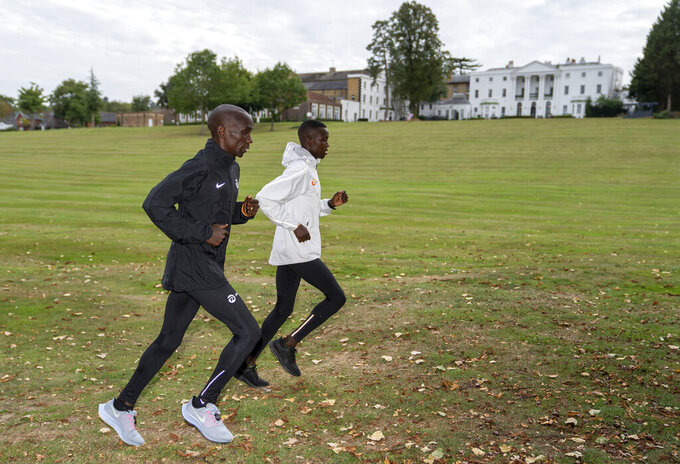 In this image issued by London Marathon Events, Kenya's Eliud Kipchoge trains alongside his pacemaker in the grounds of the official hotel and biosecure bubble in London, Monday Sept. 28, 2020, ahead of the elite-only 2020 London Marathon on Sunday Oct. 4. The 40th Race will take place on a closed-loop circuit around St James's Park in central London. (Bob Martin/London Marathon Events via AP) 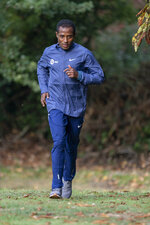 Ethiopian runner Kenenisa Bekele warned that valuable seconds could be lost on the curves of the modified London Marathon course in pursuit of Eliud Kipchoge's world record.

The longtime rivals spoke at a news conference Wednesday from a biosecure hotel reserved for elite marathoners ahead of Sunday's race.

“It’s not an easy thing running curves," the 38-year-old Bekele said. “Maybe at some point you are losing some speed because of curves, some seconds, it’s affecting maybe some times. We will see on Sunday.”

Athletes will compete on a 26.2-mile (42.2 kilometer) closed-loop course consisting of 19.6 clockwise laps around St. James’ Park. The traditional course along the River Thames was scrapped because of the coronavirus pandemic. Only elite men and women are competing and no spectators are permitted.

“It’s a new course. At this moment, it’s really difficult to say if it’s a really fast course or not,” Bekele said.

The 35-year-old Kipchoge is seeking his fifth London victory. The Kenyan is the world-record holder (2 hours, 1 minute, 39 seconds) who last year became the first person to run a marathon distance in under 2 hours, in an unofficial exhibition.

Bekele, a three-time Olympic champion on the track, won the 2019 Berlin Marathon in a time that was only 2 seconds off Kipchoge’s world record set the year before, also in Berlin. He said the repetitiveness of the course could be a problem.

“If you get some difficulties on some place, you are repeating several times. This makes you maybe uncomfortable and stressed,” Bekele said.

Kipchoge said the laps “will be no problem” but that it will be “a different race” than the sub-2 hour performance nearly one year ago in Vienna.

“I have shown the way to many athletes that to run under 2 hours is possible,” he said. "I’ve done my part ... to actually inspire everybody.”

Kipchoge had elite pacemakers and specialized Nike sneakers for that historic run. He said critics should adapt.

“We live in the 21st Century," he said. “First, we need to accept change. Secondly, development goes hand in hand with technology.”

Both men said they plan to compete in the Tokyo Olympics next year.

Kipchoge has won 11 of the 12 marathons he’s run with his only blemish a second-place finish seven years ago in Berlin.

He was his typically philosophical self when discussing how much longer he can compete at an elite level.

“Everything has a beginning and an end ... like the day has a morning, an afternoon and an evening,” Kipchoge said. “I'll still be around. I will call off the sport when the time comes.”

Only one other World Marathon Major — Tokyo — was held this year as Boston, Berlin, Chicago and New York all canceled because of the pandemic. The Tokyo field was also elites only.

Virus testing was conducted before athletes left for London and on the day of their arrival. They’ll also be tested on Friday. Degitu Azimeraw, who won the 2019 Amsterdam Marathon, withdrew after she tested positive in Ethiopia.

Brigid Kosgei will try to defend her title in the women's race. The 26-year-old Kenyan holds the world record of 2:14:04, set in winning the Chicago Marathon last October.

Kosgei will be challenged by Kenyan teammates Ruth Chepngetich and Vivian Cheruiyot. Manuela Schär and David Weir will feature in the wheelchair events.