Belgian season to start with no fans amid infection spike 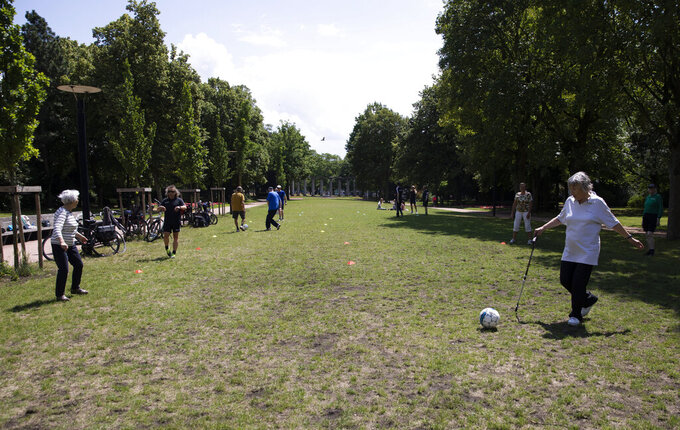 Elderly people kick a soccer ball to each other for exercise at a park in Ghent, Belgium on Friday, June 19, 2020. Belgium has lifted most of its restrictions on movement but still requires face masks on public transport and asks people to still keep a physical distance from each other, to prevent the spread of coronavirus, COVID-19. (AP Photo/Virginia Mayo)

BRUSSELS (AP) — The Belgian soccer league will start next season in empty stadiums because of the coronavirus pandemic and it urged fans on Tuesday to avoid large gatherings when supporting their team.

The league's decision came amid a surge of new COVID-19 infections in the country of 11.5 million inhabitants that has led the government to reintroduce drastic social-distancing measures. The restrictions announced Monday include lowering crowd limits at outdoor public events to 200 people.

The league said it wants “to guarantee the health of everyone in and around the world of soccer" with its decision.

Coronavirus infections nosedived in Belgium in May and June but the country has witnessed a surge in confirmed cases over the past three weeks. According to figures released Tuesday, the number rose 69% from July 18-24 compared to the previous seven days, with an average of 311 people testing positive every day.

The league called on fans to follow their teams from their own homes or within their so-called “social bubble," which is now limited to the same five people for at least the next four weeks under the government's latest guidelines.

“Only by following the measures as strictly as possible can we ensure the start of the soccer season," the league said.

The season was stopped in May with Club Brugge awarded its 16th Belgian title after the government decided that all sporting competitions would remain suspended until July 31. Club Brugge will aim for a domestic double when it takes on Antwerp in Saturday's Belgian Cup final, the first competitive game in the country since the virus brought soccer to a halt.