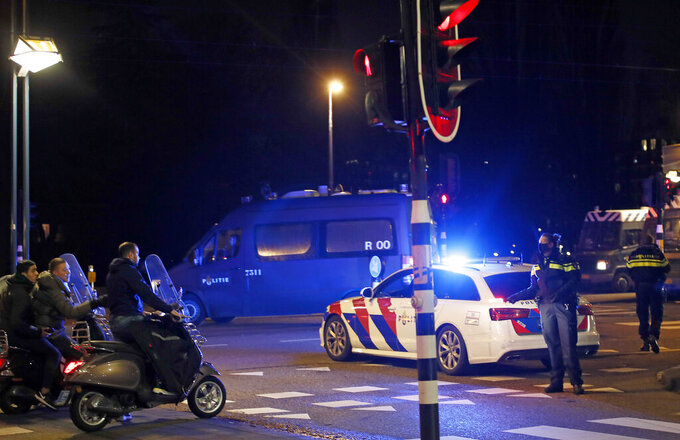 A police officers speaks to youths on scooters at a road block during a nation-wide curfew in Amsterdam, Netherlands, Tuesday, Jan. 26, 2021. The Netherlands entered its toughest phase of anti-coronavirus restrictions to date, imposing a nationwide night-time curfew from 9 p.m. until 4:30 a.m. which started Saturday Jan. 23, 2021, in a bid to control the COVID-19 infection rate. (AP Photo/Peter Dejong)

BRUSSELS (AP) — Riots in the Netherlands over coronavirus restrictions could spark similar protests in neighboring Belgium, the Belgian interior minister warned Wednesday as she instructed local authorities on how to limit the risks that protesters will spread the virus.

The Netherlands has seen been rocked by three successive nights of rioting — the worst to hit the European Union nation in years — that began with the torching of a coronavirus testing center in a Dutch fishing village on Saturday night. The violence has stretched the Dutch police and led at times to the deployment of military police.

Calls for protests against Belgium's tough lockdown and its 9 p.m. curfew have mounted on social media.

“The violent demonstrations that degenerated in the Netherlands have apparently incited certain people to call, also in our country, for demonstrations against the health measures,” Belgian Interior Minister Annelies Verlinden’s office said.

Belgium, host of the headquarters for the 27-nation EU, has had one of Europe's worst outbreaks. The nation of 11 million has seen over 20,800 confirmed virus deaths.

The wearing of protective masks is compulsory in Belgium. A night-time curfew and shopping restrictions are in place, and a ban on all nonessential travel was introduced Wednesday until at least March, limiting movement ahead of next month's school vacations.

Some calls on social media backed a protest Sunday at a major Brussels landmark, The Atomium.

In a letter to Belgian mayors, Verlinden said they should prevent any demonstrations held without authorization. It also said that authorized protests can't involve more than 100 people, must respect social distancing and mask-wearing, and must be in one place and not involve a march.

She said officials can count on police reinforcements if needed.

Verlinden also told broadcaster RTBF on Wednesday that she was hopeful that violent riots would not break out in Belgium.

“But it’s better to be proactive We’ve read the messages on social media networks. We have to avoid that happening here,” she said.