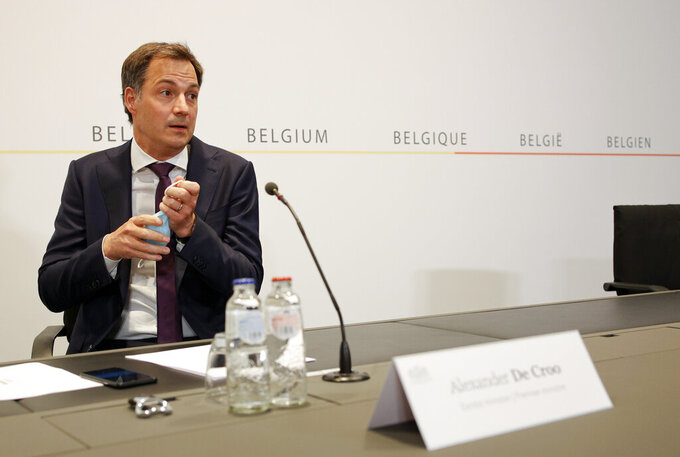 BRUSSELS (AP) — The Belgian government said Tuesday it will further relax its coronavirus lockdown as of next month and hopes to fully reopen the nation from Sept. 1.

After the country's curfew was abolished and bars and restaurants reopened their terraces last weekend, Prime Minister Alexander De Croo said they will also be able to serve customers inside from June 9.

Announcing a slew of relaxation measures, the government also indicated that from mid-August large music festivals could be staged again, with fans checked if they have been vaccinated or have proof of a negative test.

The measures were announced as the key indicators on hospital admissions and intensive care needs continued to decline. De Croo said the relaxation of the measures could be pushed through because the vaccine drive had reached cruising speed and is heading toward a level of 1 million jabs per week.

At the moment, 35 people a day still die of COVID-19 and the nation of 11.5 million people has lost 24,600 people to the pandemic to make it one of the worst hit nations in the world per capita.

Vaccinations have become a turning point and some 3.5 million have had a first shot for a total of 38 percent of the population. Over a million have already been fully vaccinated.

“The goal is to relax to the maximum as of September 1,” De Croo.

“This will only happen though if we keep things under control in hospitals,” he added, warning that the population still needs to wear facemasks and stick to social distancing rules.

The major worry now is infections are declining only at a slow pace of 4 percent a week and hover at just under 3,000 a day. With older people mostly vaccinated, children are accounting for a growing part of the total infections.

“And it looks like it will stay that way for the next days,” said virologist Steven Van Gucht.

Over the past two months, Belgium has been hit by several incidents during which crowds gathered and wilfully disregarded facemask and social distancing rules to protest that loss of personal freedom. Police had to use water cannons at least three times to drive crowds of hundreds apart.

Under the new rules announced Tuesday, events will be possible with a maximum of 200 people inside and 400 outside as of June 9.