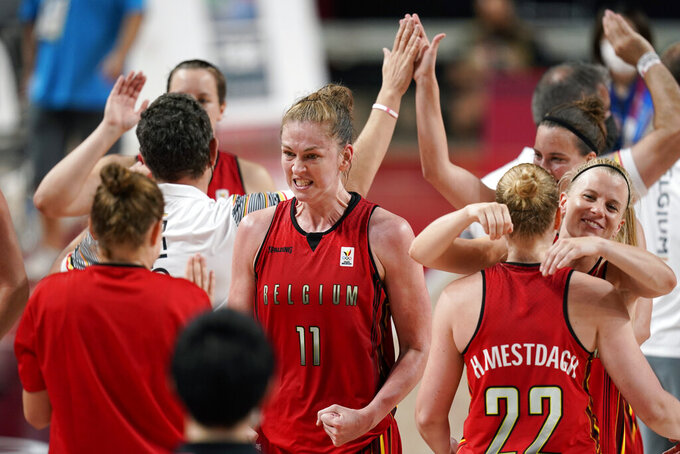 Belgium's Emma Meesseman (11) celebrates with teammates at the end of a women's basketball preliminary round game against Australia at the 2020 Summer Olympics, Tuesday, July 27, 2021, in Saitama, Japan. (AP Photo/Charlie Neibergall)

She had 32 points, nine rebounds and five assists to help Belgium beat Australia 85-70 on Tuesday in the opener for both teams.

“It’s amazing because this is part of our history right now, and if you would tell me before that we would beat Australia, one of the favorites, with 15 points? I would probably laugh," Meesseman said. “But at the same time, I know every team ... we play and every team is beatable.

Belgium trailed 59-58 early in the fourth quarter before going on a 12-2 run sparked by Meesseman, who had eight points and two assists during the game-changing spurt. She scored and then stole the inbounds pass and converted that for another basket that made it 67-61 with 6:19 left.

Australia couldn't get closer than eight the rest of the game.

”I think throughout most of the second half it was just the confidence in each other that pushed us through and made us have an amazing run in the fourth quarter,” said Meeseeman.

“She had a great game tonight, she's big time,” Australia coach Sandy Brondello said. “She did a fantastic job. We need to regroup and get back to the next one.”

Belgium finished fourth at the 2018 World Championship — it's first appearance in that tournament and has steadily been on the rise.

It was a tight game for the first few quarters with Belgium leading by four points after one and Australia taking a 41-37 lead at the half. The Opals led 47-46 heading into the final quarter before Belgium rallied.

Australia was missing Stephanie Talbot, who was on the bench but not in uniform with a minor foot injury.

“She'll be back in the next game hopefully,” Brondello said.