Berlin man convicted over threat to blow up British hospital 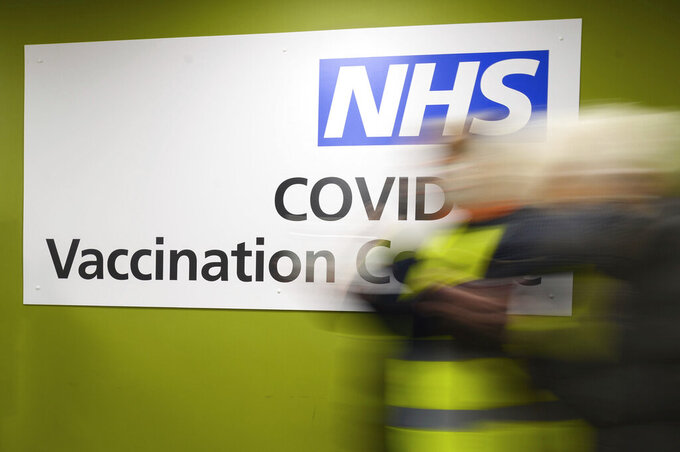 FILE - In this Thursday, Jan. 14, 2021 file photo, a sign in the interior of the NHS vaccination centre in Robertson House, Stevenage, England. An Italian man living in Berlin has on Friday Feb. 26, 2021 been convicted of attempted extortion for threatening to blow up a British National Health Service hospital unless he was paid off with 10 million pounds ($13.2 million) in crypto currency. Defendant Emil A., whose last name wasn’t given in line with German privacy laws, was sentenced to three years in prison.(Leon Neal/Pool Photo via AP, file)

BERLIN (AP) — A 33-year-old Italian man was convicted Friday of attempted extortion for threatening to blow up a British National Health Service hospital unless he was paid off with 10 million pounds ($13.2 million) in crypto currency.

Defendant Emil A., a resident of Berlin whose last name wasn't given in line with German privacy laws, was sentenced to three years in prison.

Though he never made good on the threat against an unspecified hospital, it came during the early months of the coronavirus pandemic as the British health care system was struggling. British authorities stressed how seriously it was taken at the time.

Nigel Leary, deputy director of Britain's National Crime Agency's cyber crime unit, said that because of the difficulty of evacuating patients in intensive care, “a mere phone call” threatening to plant an explosive in a hospital could have resulted in loss of life at the time.

The court found that the defendant sent an email in April 2020 from his home to the NHS, threatening the attack on a hospital unless he received the funds in his Bitcoin account.

The NHS did not respond, and the suspect proceeded to send another 17 threatening emails until his arrest in June, according to prosecutors.

The suspect, who had studied computer science, had used an email address under the pseudonym “Combat 18,” which is a known neo-Nazi organization.

British National Crime Agency officials said the suspect had used “Combat 18” merely as a front for the extortion to add “gravitas” to the threats, but did not in fact have any ideological link to the far right.

They said he had no known links to the U.K. or its hospitals.

While the threats began by targeting the public health service, NCA officials said that later on the suspect expanded his threats to include a Black Lives Matter protest and a U.K. lawmaker as potential targets.

Investigators were able to track the suspect through his electronic trail despite his attempts to conceal it, said court spokeswoman Lisa Jani. He was arrested in a raid overnight June 15 by police SWAT teams and federal agents.

During the course of their probe, investigators determined that A. had produced no bomb and had no specific target, Jani said.

He can appeal Friday's ruling.

A. was already previously convicted of a similar threat against a Dutch company in 2013 and sentenced to 10 months probation.

Pietro De Cristofaro in Berlin and Sylvia Hui in London contributed to this report.