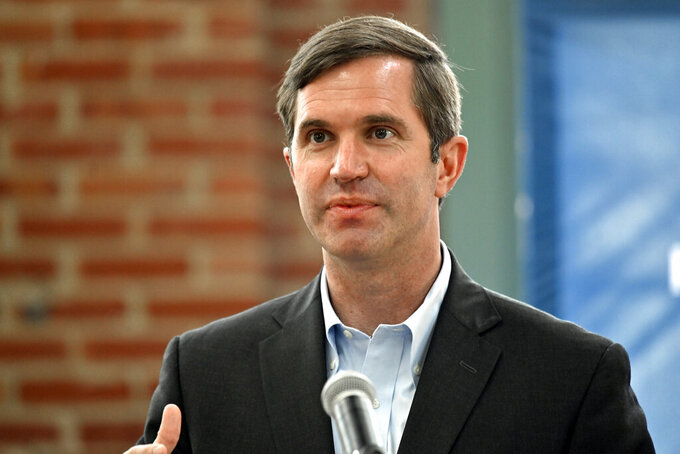 Kentucky Governor Andy Beshear speaks before the signing of a bill creating a partial ban on no-knock warrants at the Center for African American Heritage in Louisville, Ky., Friday, April 9, 2021. The bill signing comes after months of demonstrations set off by the fatal shooting of Breonna Taylor in her home during a botched police raid. (AP Photo/Timothy D. Easley)

FRANKFORT, Ky. (AP) — Democratic Gov. Andy Beshear has asked a judge to strike down a Republican-backed law that eroded his appointment authority over the state fair board in the latest partisan political battle to make its way into Kentucky courts.

The measure transferred power to appoint a majority of the fair board's members to the state's agriculture commissioner. The current commissioner is Republican Ryan Quarles — a potential challenger to Beshear in 2023 when the governor has said he will seek a second term.

The fair board legislation was among several bills that Beshear vetoed last month, only to be overridden by the GOP-dominated legislature, that shifted some of his powers to other statewide offices currently occupied by Republicans.

Beshear and a member of his cabinet filed a lawsuit in Jefferson County Circuit Court in Louisville last week challenging the changes lawmakers made over appointments to the fair board.

The suit says the majority of appointments to executive branch boards have always been reserved for the governor as the state's chief magistrate under the Kentucky Constitution.

The new law unconstitutionally deprives the governor of the ability to ensure the board uses taxpayers’ money properly, the suit said. The board makes decisions regarding the state fair and oversees the Kentucky Exposition Center and Kentucky International Convention Center. Those venues host events with an economic impact of hundreds of millions of dollars for Kentucky.

Quarles, among the defendants in the lawsuit, said in a social media post Monday that the governor “refuses to accept laws” enacted by the legislature. Instead, the governor is “running to a court to seek his preferred outcome,” Quarles said.

“If he's successful, it will mean the legislature cannot draft laws to steer the state's policy or set a vision for agencies it creates. This must be defeated,” Quarles said of the suit.

Beshear told reporters Monday that the fair board is a “critical part” of Kentucky government and said its management is “absolutely critical.”

“As the chief magistrate, as the only person who has the duty to faithfully ensure the laws are executed, the governor has got to have enough appointments on a board to ultimately be responsible for what that board does,” he said.

The new law gives the agriculture commissioner the authority to appoint nine of the board's 14 voting members, the suit said. The governor would appoint the other five voting members.

The suit asks a judge to rule that the law violates several sections of the state Constitution. Joining Beshear as a plaintiff is Kentucky Tourism Secretary Mike Berry. The suit requests an “expedited review” of the constitutional issues.

The measure prevents the governor and secretary from ensuring that “the laws are faithfully executed by giving them no ability to ensure the board with an annual budget of more than $50 million and unilateral contracting authority properly uses taxpayers’ money in its operations and properly maintains and operates all of the properties under its custody and control,” the suit said.

It said the law gave the fair board “self-control of its own functions, contracts and property.”

Also named as defendants are Senate President Robert Stivers and House Speaker David Osborne. They did not immediately respond to emails sent to their offices Monday seeking comment. A fair board spokesman said the board does not comment on pending litigation.

The suit accused the GOP-led legislature of an “unprecedented stripping” of the governor’s executive authority during the mostly contentious 30-day session that ended recently.

“These actions will effectively prevent the governor from fulfilling his constitutional duty to take care that the laws be faithfully executed,” the suit said.

Last week, the Kentucky Supreme Court agreed to take up Beshear's challenge of Republican-supported laws aimed at limiting his authority to respond to the COVID-19 pandemic. That case tests the balance of power between the state’s executive and legislative branches — a constitutional issue now extending to the fair board-related measure.

“There's only one executive branch and it’s headed by the governor," Beshear said Monday. "And every time you try to move governance outside of there and let other people make decisions that aren’t accountable to the voters, that will ultimately indebt the commonwealth further, the less responsibility you get.”