Beshear reaches out to lawmakers on executive powers bills 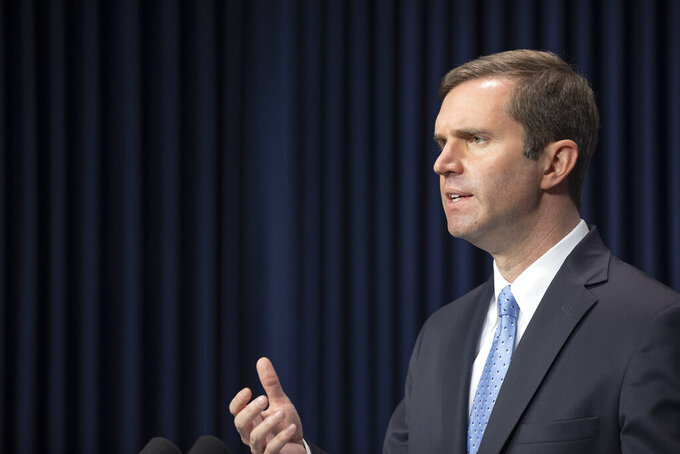 FRANKFORT, Ky. (AP) — Faced with a weakening of his executive powers, Kentucky's Democratic governor has offered an outline for potential compromises in a letter to top Republican legislative leaders.

Gov. Andy Beshear sent the letter to House Speaker David Osborne and Senate President Robert Stivers last week, soon after the governor vetoed a series of GOP-backed bills that would limit his executive authority, including in times of emergency.

The governor doesn't have much leverage unless he can mobilize public support for his proposals. Republican lawmakers have the numbers to override the governor’s vetoes when they resume their session in early February.

The governor has said the measures would hamper the fight to slow the spread of COVID-19. Beshear's letter stated his “strong preference” is to hold off on legislation altering executive powers until Kentucky has overcome the pandemic. But he told the House and Senate leaders that his letter was an attempt to “provide a potential framework for discussion and compromise.”

“If the General Assembly is determined — even in the midst of a deadly pandemic and in spite of our comparatively successful response — on passing legislation, then I recommend we discuss narrowly tailoring that legislation to address concerns that you raise,” the governor wrote.

The legislative leaders did not immediately respond when their offices were asked Tuesday about Beshear's suggestions. The governor's letter was obtained by The Associated Press through an open records request.

Stivers recently told The Courier Journal that top lawmakers would be open to negotiations if the governor showed a willingness to discuss other ways to address the emergency powers issues.

Passage of the bills dominated the early part of this year’s legislative session.

One of the vetoed bills would limit the governor’s executive orders in times of emergency to 30 days unless extended by lawmakers. It would apply to orders that place restrictions on in-person meetings of schools, businesses and religious gatherings or impose mandatory quarantine or isolation requirements.

Republican lawmakers have complained about the length of the governor's emergency powers. In his letter, Beshear suggested linking the timeframe of a state emergency to the corresponding federal emergency declaration, giving him additional leeway to respond to the crisis. That would give the state additional flexibility to address issues unique to Kentucky if needed, the governor's office said.

“While I believe the emergency itself — here, a deadly virus — sets the timeline, I am open to discussing how to potentially index the length of a state declaration in response to a pandemic or extended emergency to the length of the applicable federal declaration with some grace period, perhaps 60 days,” Beshear wrote.

Beshear pushed back against another frequent complaint from GOP lawmakers — that they weren't consulted as the governor devised the state's response to the public health crisis.

“If the true goal is consultation — and not control — then formalizing and providing a structure for such consultation should be the goal of any legislation,” the governor wrote

Beshear suggested creating an obligation for a governor's administration, during times of emergency, to report to a legislative committee monthly on the state of the emergency and the steps taken to deal with it.

“This would create formalized consultation in a structural and transparent way where legislative committee members could express support or concern to both the administration and the public,” the governor wrote.

In deflecting the GOP criticism, Beshear's office noted that members of his administration have spent more than 30 hours testifying before legislative committees to discuss coronavirus-related issues.

Republican lawmakers accuse Beshear of overreaching with his virus-related restrictions on businesses, schools and individuals, saying the orders were arbitrary and uneven in application. Beshear says the actions saved lives and were similar to steps taken in other states.

Kentucky has reported more than 350,000 COVID-19 cases and at least 3,495 deaths since the pandemic began. Despite that, Beshear said the Bluegrass State has fared better than most states in combating the pandemic.

Beshear also raised concerns in his letter about another bill that would eliminate the governor’s ability to temporarily reorganize boards, commissions, agencies and cabinets when the legislature isn't in session. He warned those limitations could at times prevent the “faithful execution” of law and could disqualify Kentucky from some federal grants.

He proposed a “more tailored approach” in any legislation.