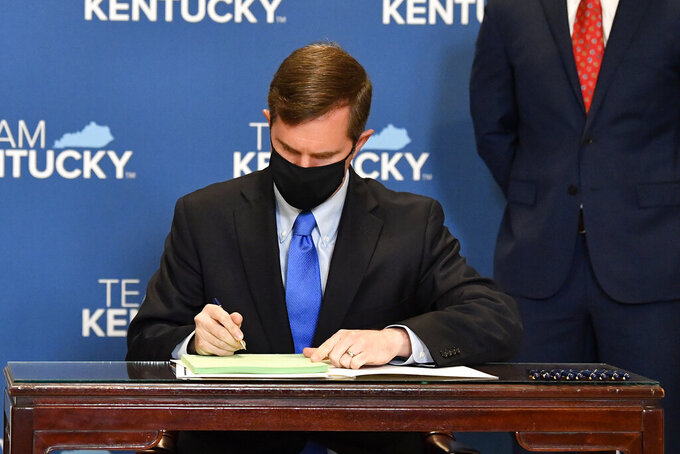 Other agreed upon uses for the federal money include broadband expansion and school construction — decisions by the GOP-led legislature that were backed by the Democratic governor.

The infusion of federal money offers a “once-in-a-lifetime opportunity” for long-term investments to attract businesses, create thousands of jobs and improve quality of life, the Democratic governor said. It will also strengthen the state's competitiveness in the post-pandemic economy, he said.

A bipartisan group of lawmakers joined Beshear as he signed bills appropriating some of the money flowing from the pandemic aid package championed by President Joe Biden and passed by congressional Democrats — including Kentucky's lone Democratic congressman, John Yarmuth. State government in Kentucky is expected to eventually receive about $2.6 billion, the governor's office said.

“Everyone saw the potential," Beshear said. "Everyone agreed that it was the right thing to do. And that now is the time to capitalize on this once-in-a-lifetime chance — a chance to invest in our people and a chance to rocket forward into our future.”

Lawmakers agreed to use $300 million of federal money to extend broadband service, $250 million for water and wastewater projects, $127 million for school construction and $575 million to repay a federal loan that kept the state’s unemployment insurance program afloat.

The bill including the school construction money went into law without the governor's signature after he line-item vetoed two sections of the bill while keeping the funding in place. Beshear has been a steadfast supporter of providing additional school construction funding.

Republican Senate President Robert Stivers said the investments create “an economic dynamic for future expansion” that will benefit Kentucky for years. Sen. Morgan McGarvey, the top-ranking Senate Democrat, said the last-minute spending agreements were ”a confirmation of what is possible when government is working together.” Partisan rancor was on display for much of the 30-day session as Republicans watered down some of the governor's executive authority.

Beshear said he hoped the spending agreements with GOP lawmakers — reflecting some of his priorities — “created the foundation for more trust” that will result in "more successes” for the state.

The governor recently said it was “too early to know” whether he would need to convene a special legislative session later this year to appropriate the remainder of the state’s portion of federal aid, or whether it could be dealt with in the regular 2022 session that convenes in January.

One of the bills signed by Beshear also directed $140 million in state funds to support full-day kindergarten in Kentucky. Other funding provisions taking effect included $75 million for renovating vocational schools and $20 million for rural hospitals.