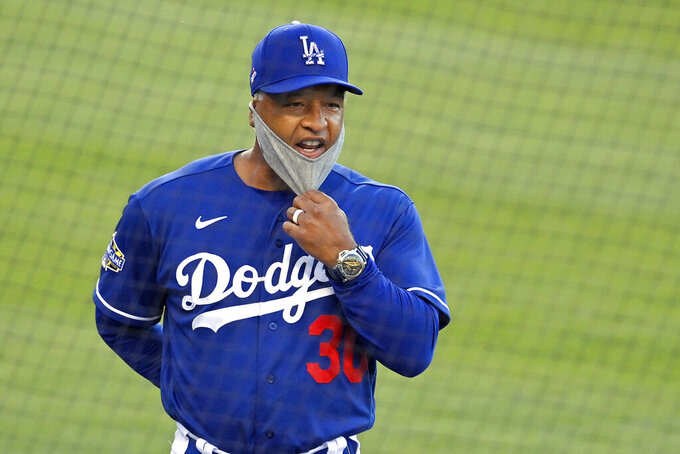 FILE - In this July 8, 2020, file photo, Los Angeles Dodgers manager Dave Roberts pulls down his mask to talk to someone in the dugout from a distance during an intrasquad baseball game in Los Angeles. The Dodgers open the season at home on July 23 with a four-game series against the rival San Francisco Giants. (AP Photo/Mark J. Terrill, File)

LOS ANGELES (AP) — The Los Angeles Dodgers have been nothing if not consistent in recent years. Seven straight seasons of 90-plus wins to go with seven NL West titles in a row. All that's missing is an elusive World Series championship.

They open the shortened 60-game season with a couple of B's in the lineup: Cody Bellinger and new addition Mookie Betts. Bellinger won NL MVP last year and Betts was the 2018 AL MVP with Boston. They are among the most talented combos in baseball and both could contend for MVP honors. Betts has extra incentive, too, since he can become a free agent after the season.

One of the Dodgers' greatest strengths is their depth. Beyond Bellinger and Betts, their offense boasts Max Muncy, Justin Turner and Corey Seager and the bench features utility players Chris Taylor and Enrique Hernández.

Betts will slot well into the powerful lineup. He hit .295 last season with the Red Sox. The Dodgers' offense led the National League with 886 runs scored, a .472 slugging percentage and 279 home runs. With pitcher David Price sitting out and left-handers Rich Hill and Hyun-Jin Ryu departed, there's room in the rotation for another southpaw to join veteran Clayton Kershaw. LHP Alex Wood returns on a $4 million, one-year deal after being a Dodgers starter and an All-Star in 2017. RHP Blake Treinen was signed to a $10 million, one-year deal in an effort to bolster the bullpen. The hope is he avoids the injuries that derailed his 2019 season and regains his 2018 form when he had an 0.78 ERA and earned All-Star honors with Oakland.

EYES ON THE 'PEN

Closer Kenley Jansen is coming off an inconsistent 2019, when home runs and walks were big problems for him. He reported to summer camp late after saying he tested positive for COVID-19. Jansen said he expects to be ready for the season opener. The bullpen posted a 3.85 ERA that was lowest among NL relievers last year, but it was second in the league with 29 blown saves. Two of the Dodgers' three losses to Washington in the NL Division Series were tagged to the relief corps.

AT DH, TAKE YOUR PICK

The designated hitter is coming to the National League for the 60-game season as a way to avoid overtaxing pitchers who would otherwise have to hit. The Dodgers' depth allows them the luxury of using a by-committee approach. In recent years, the team has had more talented players than available playing time, so adding an extra bat only makes it easier. Hernández, A.J. Pollock or Taylor could be used against left-handed pitchers, while Joc Pederson could DH against right-handers. Manager Dave Roberts also could use the spot to give coveted at-bats to youngsters Matt Beaty, Edwin Rios or Will Smith when he needs a break from catching.

The Dodgers won’t have Price in the rotation after he decided not to play this season because of the coronavirus. The five-time All-Star made two starts in spring training, striking out 10 in 4 1/3 innings before all camps were closed in mid-March. Price has a $217 million, seven-year contract that runs through 2021. He was going to make $32 million this season. He was 7-5 with a 4.28 ERA for Boston last year and helped the Red Sox beat the Dodgers in the 2018 World Series. But Price is staying close with his teammates, watching scrimmages during summer camp and texting his observations to them.

2B Gavin Lux missed the first week of summer camp for undisclosed reasons. He's expected to be a starter after getting called up last September and becoming the youngest player to slug a postseason home run at age 21. He hit .240 in September and .222 in the playoffs. RHP Dustin May showed fastball velocity and strong command in his MLB debut last year, and could be in the mix to fill Price's spot in the rotation.

The Dodgers open the season at home on July 23 with a four-game series against the rival San Francisco Giants. They visit the Houston Astros on July 28-29 and the Astros come to Los Angeles on Sept. 12-13. Those two series were highly anticipated by fans before MLB announced no spectators will be allowed in stadiums. Houston beat the Dodgers in the 2017 World Series and the Astros were later found to have used technology to cheat. The pandemic forced the cancellation of the All-Star Game at Dodger Stadium, so the team will play host in 2022 instead.