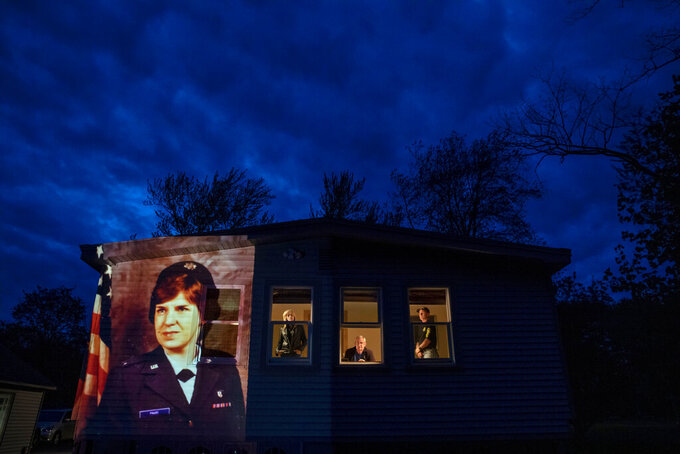 FILE - In this May 14, 2020, file photo, an image of veteran Constance "Kandy" Pinard is projected onto the home she grew up in with her sister, Tammy Petrowicz, left, and brothers, Paul, center, and Brian Driscoll in Florence, Mass. Pinard, a nurse in the U.S. Air Force and resident of the Soldier's Home in Holyoke, Mass., died from the COVID-19 virus at the age of 73. The coronavirus pandemic was Massachusetts' top story of 2020. (AP Photo/David Goldman, File)

Massachusetts’ biggest story of 2020 involved something so tiny it required an electron microscope to view.

But Massachusetts also played a pivotal role in the global race for a vaccine. Studies showed a vaccine developed by Cambridge-based Moderna Inc. offered strong protection against the virus, and the company began shipping it out after gaining emergency approval from the Food and Drug Administration.

Other top stories that grabbed headlines and attention in 2020:

Federal prosecutions of parents who paid bribes to get their children into competitive U.S. colleges and universities were a top story in 2019, and this past year, two of the most prominent defendants were brought to justice. “Full House” actress Lori Loughlin and her fashion designer husband, Mossimo Giannulli, both were sentenced to prison time — appearing before a federal judge in Boston via video link because of the pandemic.

U.S. Sen. Elizabeth Warren's failed bid for the Democratic presidential nomination, after considerable momentum early in the campaign cycle, dominated politics in Massachusetts. So did U.S. Rep. Joe Kennedy III, a grandson of Robert F. Kennedy, who gambled — and lost — big by betting he could win the Democratic primary. Sen. Edward Markey, a progressive, prevailed, and Kennedy became the first in his storied political dynasty to lose a race for Congress in Massachusetts.

A federal appeals court ruled that Harvard doesn't discriminate against Asian American applicants. The decision offered relief to other colleges that consider race in admissions, but also set the stage for a potential review by an increasingly conservative U.S. Supreme Court. The 1st U.S. Circuit Court of Appeals in Boston rejected claims from an anti-affirmative action group that accused the Ivy League University of imposing a “racial penalty” on Asian Americans.

A federal appeals court threw out Boston Marathon bomber Dzhokhar Tsarnaev’s death sentence, saying the judge who oversaw the case did not adequately screen jurors for potential biases. The 1st U.S. Circuit Court of Appeals ordered a new penalty-phase trial on whether the 27-year-old Tsarnaev should be executed for the 2013 attack that killed three people and wounded more than 260 others. The Justice Department asked the U.S. Supreme Court to review the case.

Justice Kimberly Budd made history as she was sworn in as the chief justice of Massachusetts’ highest court. Budd, 54, is the first Black woman to serve as chief justice of the Supreme Judicial Court, which traces its history to the late 17th century. Republican Gov. Charlie Baker nominated her to succeed Chief Justice Ralph Gants, an acclaimed jurist who died in September.

Nobody knew it at the time, but on Jan. 4, Tom Brady played his last game as a Patriot at Gillette Stadium. The six-time Super Bowl-winning quarterback's storied run in New England ended with a thud and a 20-13 loss to the Tennessee Titans. Two and a half months later, Brady embarked on what he called a “new football journey” and signed with the Tampa Bay Buccaneers, where he was joined by former Patriots star Rob Gronkowski.

The state marked the 400th anniversary of the 1620 Pilgrim landing, but unconventionally, and not just because of coronavirus restrictions. Yearlong events emphasized the history and experience of the Indigenous people who, at their own peril, helped the white European settlers survive. Members of the Wampanoag tribe and the descendants of those who sailed from England on the Mayflower — mindful of 2020's nationwide reckoning with entrenched racism — were determined to openly and truthfully revisit the Pilgrims' complicated legacy.

A father and son from Massachusetts allegedly helped spirit former Nissan Motor Co. CEO Carlos Ghosn out of Japan while he was awaiting trial. The U.S. State Department agreed to turn over Michael Taylor, a U.S. Army Special Forces veteran, and his son, Peter Taylor. A federal judge intervened to block the men's immediate removal while she reviewed an emergency petition filed by their lawyers. The Taylors are charged with helping Ghosn flee the country in 2019 with the former Nissan boss tucked away in a box on a private jet.

Five former employees of eBay Inc. pleaded guilty to charges stemming from their alleged involvement in a cyberstalking campaign. Federal prosecutors said the scheme included having live spiders and other disturbing deliveries sent to a Massachusetts couple who had published an online newsletter critical of the online auction site. Two other employees also were charged. Investigators said the victims were targeted after their newsletter published an article about a lawsuit filed by eBay that accused Amazon of poaching its sellers. San Jose, California-based eBay fired the employees.