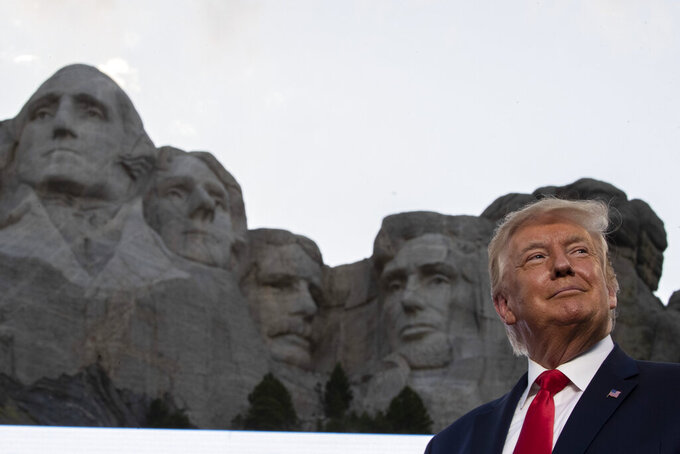 GETTYSBURG, Pa. (AP) — Presidential hopefuls tend to declare every upcoming election the most important one that voters have faced in their lifetime. Joe Biden goes bigger.

The Democratic nominee portrays 2020 as an entanglement of social, economic, political, environmental and public health crises as threatening to America’s stability as the Civil War and the Great Depression. Biden points to the presidents of those times -- Abraham Lincoln and Franklin D. Roosevelt -- for inspiration, even using one of the nation’s most hallowed battlefields, where Lincoln delivered his Gettysburg Address in 1863, as a backdrop for his closing argument against President Donald Trump.

“A century and a half after Gettysburg, we should consider again what can happen when equal justice is denied and when anger and violence and division are left unchecked,” Biden said in rural Pennsylvania.

He pledged, as president, to “marshal the ingenuity and good will of this nation to turn division into unity and bring us together.” Refashioning Lincoln’s words, Biden added: “It cannot be that here and now, in 2020, that we will allow the government of the people, by the people and for the people to perish from this Earth. It cannot, and it must not.”

The approach, Biden aides say, is more than lofty presidential rhetoric; it’s necessary groundwork for governing. Being a steady alternative to Trump, the ex-reality television star Biden describes as “erratic” and “dangerous,” may be enough to win in November, they argue.

But once in office, Biden would need a clear mandate from a splintered electorate if he hopes to enact the kinds of comprehensive proposals he proposes to control the coronavirus pandemic and its economic fallout, combat the climate crisis and confront centuries of racial and economic inequities.

“A lot of good work and thinking is going into how to actually tackle the challenges in this moment of crisis that the Trump administration has failed to address and resolve,” Democratic Sen. Chris Coons of Delaware, a Biden confidant, said in a recent interview.

A Biden aide who was not authorized to publicly discuss strategy and spoke on condition of anonymity said the campaign is considering at least one more major speech before the Nov. 3 election with the kind of historical sweep and imagery that Biden mustered in Gettysburg.

There are hazards and unknowns in Biden’s approach.

“Tom Dewey,” quipped Newt Gingrich, the former Republican House speaker and Trump ally. He was referring to Republicans’ 1948 presidential nominee, who appeared a sure victor over President Harry S. Truman at a time of domestic uncertainty after World War II.

“Dewey spent a large part of October talking about how great a president he’d be, and Truman spent October taking Dewey apart” on the particulars, Gingrich said of Truman’s comeback victory.

As dire as Trump’s political standing appears to be, Republicans have countered Biden’s argument for an ambitious presidency with equally stark warnings that the longtime center-left deal-maker is in fact a vessel for a leftward lurch toward socialism.

In Trump’s telling, Biden’s ideas to combat the pandemic would cripple economic activity; his tax plans are confiscatory wealth redistribution; health care insurance expansion amounts to a government takeover; his energy overhaul to stymie climate change would kill millions of jobs; and his talk of racial injustice amounts to declaring the whole country racist.

Biden has from the start of his campaign talked of Trump as an existential threat to the “soul of the nation.” He nodded to racial injustice with frequent reminders that “we haven’t always lived up to those values” in the Declaration of Independence. During the primary campaign he made standard Democratic arguments about bolstering the middle class.

But the coronavirus, its economic damage and a summer of protests of police violence against Black Americans have accelerated Biden’s rhetoric.

“The blinders have been taken off. People realize what’s at stake here,” Biden said Saturday in Erie, Pennsylvania, repeating what has become a go-to line in nearly every campaign setting. Another line: “The country is ready. They get it.”

And he swats away Trump’s caricatures. “Do I look like a socialist?” he said recently in Miami.

Biden's tack bears cursory resemblance to some of Trump’s stagecraft.

The president made Democrats seethe in August as he used the White House as his backdrop to accept the Republican nomination for a second term. Before that, Trump traveled to Mount Rushmore on the weekend of July Fourth for a dramatic address. His backdrop: the carved likenesses of Lincoln, George Washington, Thomas Jefferson and Theodore Roosevelt.

“I’ve done more for the Black community than any other president ... with the possible exception of Abraham Lincoln,” Trump said in September, four months after conducting an interview with Fox News from the feet of the Lincoln Memorial.

Biden described his Gettysburg speech as “dramatic” in a preview to donors hours before he delivered it. Yet while Trump makes explicit comparisons to his predecessors in terms of accomplishment and renown, Biden’s language more carefully calls upon them as inspiration.

In a Sept. 22 fundraiser, a top Biden supporter recalled urging the former vice president to run against Trump.

"I was grabbing you by the lapels and said, ‘You’re the Harry Truman of our time. You’ve gotta run.’ I know you remember that,” Dennis Mehiel, chairman of U.S. Corrugated, Inc., told Biden, drawing laughter from the candidate.

Then Mehiel pivoted, declaring a national “tipping point” that requires more. “I’ve changed my mind,” he told Biden. “You must be the Franklin Roosevelt of our time. ... We had wonderful success in many areas following his leadership.”

“I have trouble thinking of myself in terms of FDR,” Biden said of the Democrat whose New Deal policies vastly expanded the federal government's size and scope. “But one thing I do agree on ... whoever is the next president is going to inherit an economic circumstance that is as dangerous, as consequential as Roosevelt did.”

Gingrich said Biden “has no choice” but to reach for a mandate as he tries to parlay a national lead into an expanded House majority and a new Democratic-run Senate. The raw political realities of the eras Biden cites as guideposts demonstrate why.

Lincoln managed the Civil War as an iron-fisted commander in chief, often governing through executive orders his congressional opponents could do nothing about. His staunchest enemies weren’t on Capitol Hill for him to navigate at all: They’d seceded.

Roosevelt, meanwhile, was vilified by Republicans and Wall Street titans as a socialist. But he commanded overwhelming Democratic majorities in Congress, margins Biden likely would never enjoy.

“For Biden to do what he wants to do,” Gingrich said, “he needs to sweep.”