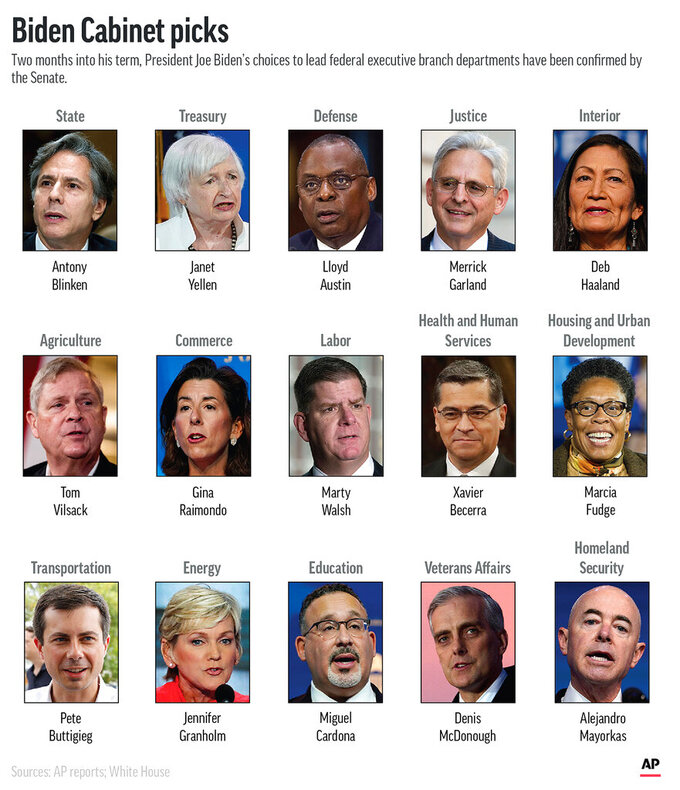 WASHINGTON (AP) — Joe Biden will convene his first Cabinet meeting on Thursday, a presidential rite of passage that will be used to promote his new infrastructure plan. The gathering will look very different from those held by his predecessor.

To begin with, the full Cabinet won’t meet in the room that bears its name, instead assembling in the more spacious East Room to allow for social distancing. All attendees, including the president, will wear masks. Also, the afternoon meeting probably will not include the over-the-top tributes to the chief executive that came to define Cabinet meetings held by President Donald Trump.

The timing of the first meeting was deliberate: a week after the full Cabinet was confirmed and a day after Biden was poised to release his infrastructure plan in Pittsburgh, which will likely dominate Washington through the summer and shape next year’s midterm elections.

With the sales blitz for the plan just beginning, the focus of the meeting will be on how the package can help across government, as well on continuing to emphasize the benefits of the $1.9 trillion COVID-19 relief bill that Biden signed into law this month, said White House deputy press secretary Andrew Bates.

Cabinet meetings in the modern era are less about setting administration policy than ensuring that all the government agencies are on the same page, say former officials. The sessions also are an opportunity for the president to make his priorities and values clear. Policy debates are generally reserved for smaller, subject-specific gatherings of Cabinet officials and senior advisers, such as the National Security Council and the Domestic Policy Council.

“As the federal government has become increasingly complex over the years, the role of the Cabinet has evolved as well," said Chris Lu, President Barack Obama’s first-term Cabinet secretary. “In addition to serious policy discussions, Cabinet meetings are an opportunity for the president to lay out broad directions for how his team should operate."

All 16 permanent members of the Cabinet — the vice president and heads of the executive departments, including Treasury Secretary Janet Yellen, Secretary of State Antony Blinken and Pentagon chief Lloyd Austin — will attend in person. So will other Cabinet-ranked officials, including White House chief of staff Ron Klain and Director of National Intelligence Avril Haines.

Shalanda Young, acting budget head, will attend because Neera Tanden, Biden’s first choice for that job, withdrew her nomination amid Senate opposition. Biden is also awaiting the confirmation of Eric Lander to be the director of the Office of Science and Technology Policy, a post that the president has elevated to Cabinet rank.

Biden has faced questions about why his Cabinet department heads do not include an Asian American. The White House has highlighted that this Cabinet is the most diverse in history. Katherine Tai, the U.S. trade representative, will be in attendance on Thursday.

In all, 25 people will attend, the White House said. For some, it will be their first time meeting other members of the Cabinet, given that the pandemic curtailed inauguration celebrations and other social gatherings.

In normal times, scheduling an in-person Cabinet meeting would require weeks, if not months, of planning to block off time in the travel schedules of the various principals. But most have remained in Washington due to the pandemic.

The Cabinet members will soon begin to fan out across the country to pitch both the COVID-19 relief and infrastructure plans, officials said. Because nearly all the members in the presidential line of succession are gathered in one room, special notification is typically given to the House speaker and the Senate president pro tempore to ensure one of them is in a secure location.

His first full Cabinet meeting, held in June 2017, began with Vice President Mike Pence declaring that it was “the greatest privilege of my life to serve as the vice president to the president who is keeping his word to the American people.”

Reince Priebus, the chief of staff, went on to declare, “We thank you for the opportunity to and the blessing to serve your agenda.”

On it went from there, each Cabinet member tried to outdo the other in heaping compliments on the smiling, nodding president as the cameras rolled.

The White House press pool will be present for Biden’s remarks but probably will be ushered from the room before other speakers begin, according to officials.