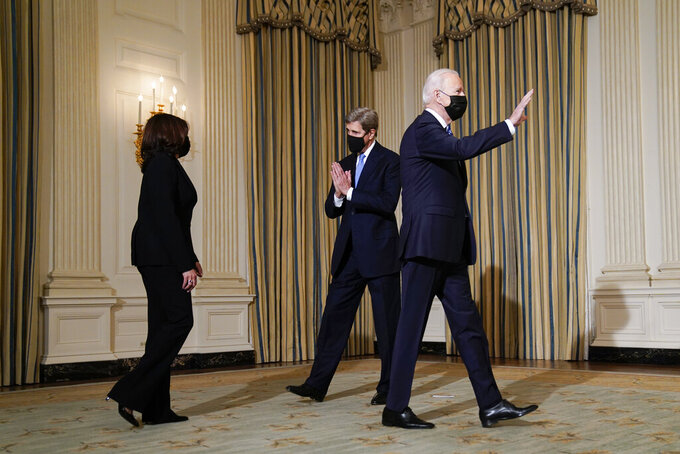 President Joe Biden spoke to Japanese Prime Minister Yoshihide Suga on Wednesday and offered his administration's commitment to protecting the Senkaku Islands, a group of uninhabited islets administered by Tokyo but claimed by Beijing, the White House said.

Biden has previously expressed a commitment to the 1960 Japan-U.S. security treaty that covers the Senkaku Islands. But they are the subject of growing anxiety in Japan after China last week passed legislation authorizing coast guard ships to use weapons against foreign ships deemed to be involved in illegal activities around the islets in the East China Sea.

The White House said in a statement that the two leaders also spoke about other shared security concerns involving China as well as North Korea.

The call was one of several between Biden and foreign counterparts since he was inaugurated last week. He's also held initial talks with Canada's Justin Trudeau, Mexico's Andrés Manuel López Obrador, Russia's Vladimir Putin and others in recent days.

The White House gave no indication of whether Biden and Suga discussed plans for the summer Olympic Games in Tokyo. The games were supposed to be held last summer but were postponed until this coming July because of the coronavirus pandemic.

There are growing concerns about whether the games can be safely carried out as the virus continues to kill thousands each day around the globe and nations struggle to ramp up distribution of vaccines to the public.

International Olympic Committee President Thomas Bach on Wednesday pushed back against suggestions that the body could move the games to another city or again postpone the start of the quadrennial event.

“We are fully concentrated on the Opening Ceremony on July 23rd, 2021,” he said.