Biden recommits to Good Friday accord on St. Patrick's Day 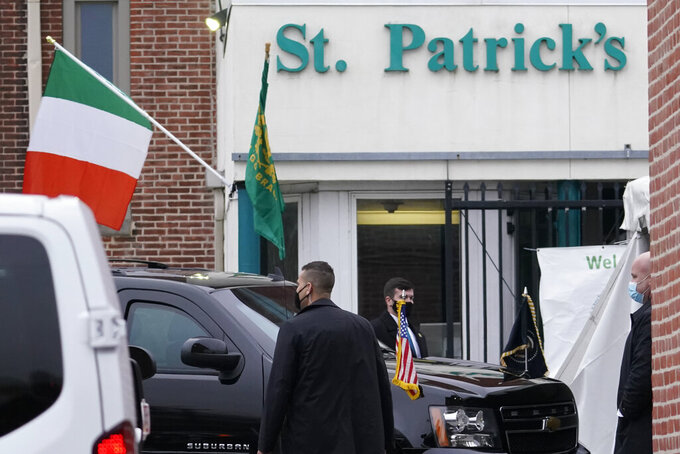 WASHINGTON (AP) — President Joe Biden is marking St. Patrick’s Day as he recommits the U.S. to the Good Friday Agreement, which has come under increasing stress following the United Kingdom's exit from the European Union.

Before the meeting, the president attended a morning Mass at the aptly named St. Patrick’s Church near his family home in Wilmington, Delaware, then returned to the White House to partake in the St. Patrick’s Day celebrations, which were toned down due to the coronavirus pandemic. In keeping with recent tradition, the water in fountains outside the White House ran green for the day.

Biden and Martin’s virtual bilateral meeting — Biden's third with a foreign leader since he took office eight weeks ago — included the presentation of an engraved bowl of shamrock, which was sent ahead to Washington. It ensured that a tradition that began in 1952 continued uninterrupted, if modified by COVID-19 concerns.

Signed in 1998, the Good Friday Agreement helped end sectarian violence that had raged for three decades over the issue of Northern Ireland unifying with Ireland or remaining part of the U.K.

Biden told Martin that it is “critically important” that the Good Friday Agreement be maintained.

The U.K.'s Jan. 1 exit from the EU has created new tensions over trade and travel at the Irish border. EU authorities on Monday initiated legal action against the British government for violating the Brexit agreement’s Northern Ireland Protocol, which was designed to keep the border open and protect the peace process in Northern Ireland.

That sparked an angry response from Northern Ireland’s Democratic Unionist Party, which said the EU was more interested in protecting its internal market than the peace process. The party, which wants to maintain ties to the U.K., has criticized the protocol for treating the province differently from the rest of the country.

“Rather than showing concern for stability in Northern Ireland or respect for the principle of consent, Brussels is foolishly and selfishly focused on protecting its own bloc,” DUP leader Arlene Foster said.

The free movement of goods and people across the border between Northern Ireland and the Republic of Ireland underpinned the 1998 Good Friday Agreement by spurring economic development and permitting the removal of border posts that were once a magnet for violence. More than 3,000 people died during decades of fighting between republican forces, unionists and the British military.

In order to protect the peace process following Brexit, Britain and the EU agreed to keep the frontier open but conduct some border checks at ports in Northern Ireland before goods are shipped to the republic.

After Britain left the EU single market at the beginning of this year, a grace period allowed some of these checks to be delayed until April 1 because both sides agreed they weren’t ready to implement the new system.

Earlier this month, Britain unilaterally extended the grace period to Oct. 1, saying the delay was needed for “operational reasons.” The EU on Monday formally notified Britain that it had breached the protocol, a step that could result in the case being reviewed by the European Court of Justice.

Unilateral decisions by the U.K. undermine trust and threaten the peace process, the EU said.

The protocol “is the only way to protect the Good Friday Agreement and to preserve peace and stability, while avoiding a hard border on the island of Ireland and maintaining the integrity of the EU single market,” European Commission Vice President Maros Sefcovic said Monday when he announced the action.

Biden told Martin he hopes to hold the ceremony in Washington next year, noting the White House will be lit green on Wednesday evening to “celebrate the deep deep affection Americans have, particularly Irish Americans, for Ireland.”

“We Irish are the only people who are nostalgic for the future," he added.

Biden and Martin’ also emphasized their commitment to addressing global challenges and combating the coronavirus, among other issues, the White House said.