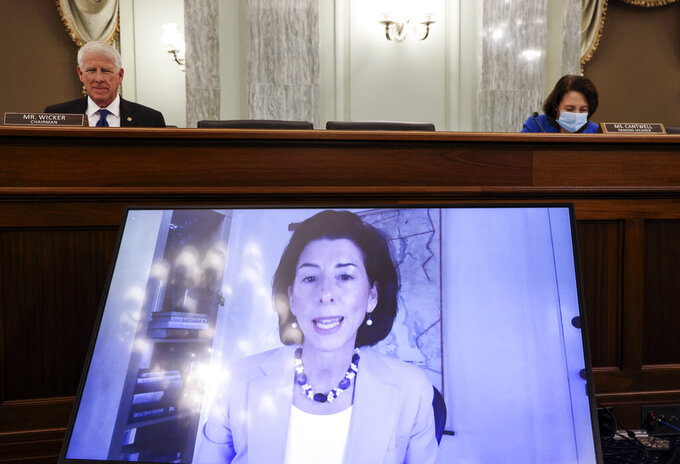 WASHINGTON (AP) — President Joe Biden’s pick to oversee the Commerce Department took a tough line on China in her confirmation hearing Tuesday, though she stopped short of singling out which Chinese companies should remain on a list that limits their access to advanced U.S. technology.

If confirmed, as expected, Rhode Island Gov. Gina Raimondo, a former venture capitalist, would be responsible for promoting opportunities for economic growth domestically and overseas.

Raimondo focused her testimony before a Senate panel Tuesday on the need to help those sectors of the economy and the workers hit hardest by the coronavirus pandemic.

“COVID has shined a light on the inequities in our economy,” Raimondo said. “The president has been very clear, we’re going to build back better and more equitably, and I strongly support that.”

She would inherit a department that took actions during the Trump administration that heightened tensions with China, namely through tariffs and the blacklisting of companies by placing them on the U.S. government's so-called Entity List. U.S. companies need to get a license to sell sophisticated technology to companies on the list.

“China's actions have been anti-competitive, hurtful to American workers and businesses, coercive, and, as you point out, they're culpable for atrocious human rights abuses," Raimondo said in response to a question from Sen. Ted Cruz, R-Texas. “So whether it's the entities list, or tariffs, or countervailing duties, I intend to use all those tools to the fullest extent possible to level the playing field for the American worker."

When Cruz pressed Raimondo on whether certain companies would remain on the Entity List, Raimondo said she would consult with lawmakers, industry and allies and “make an assessment as to what's best for American national and economic security."

Raimondo similarly demurred on a question about the tariffs the Trump administration had placed on imported steel and aluminum in the name of national security. Those tariffs have raised costs for metal-using industries. She told Sen. Roy Blunt, R-Mo., that she would listen to him and manufacturers in his state and “take their needs into account."

Sen. Jacky Rosen, D-Nev., also voiced concerns about tariffs the Trump administration enacted on solar panels, which Rosen said cost the country tens of thousands of solar jobs. Again, Raimondo said she would work with her and she didn't take a direct stand. “I understand it's time-sensitive and challenging and a lot of jobs are at stake," Raimondo assured her.

Raimondo was elected governor in 2014 and won reelection in 2018. She’s expected to handily win a confirmation vote, but it’s unclear when that vote will occur. Nominations pertaining to national security generally take precedent. The vote may also have to wait on former President Donald Trump’s impeachment trial, which will dominate the Senate’s attention starting the week of Feb. 8.

Sen. Roger Wicker, R-Miss., who chairs the commerce committee, wrapped up the hearing on an encouraging note, telling Raimondo, “I do not believe you will be serving as governor of the state of Rhode Island for very much longer.”

Raimondo, 49, is the first woman elected governor of Rhode Island. She is a Rhodes Scholar and a graduate of Yale Law School who recalls her father losing his job at a Bulova watch factory in Providence to show she can connect with those worried about jobs in the U.S. being moved to other countries.

Much of her hearing was focused on regional issues, with lawmakers from coastal states focused on protecting valuable fishing industries and lawmakers for rural states calling for enhanced access to broadband. She confirmed her interest in working with them on those issues and emphasized the need to tackle climate change. She noted as governor that she oversaw construction of the nation’s first offshore wind farm.

“Like President Biden, I know the climate crisis poses an existential threat to our economic security, and we must meet this challenge by creating millions of good, union jobs that power a more sustainable economy,” Raimondo said.

The Commerce Department comprises a dozen bureaus and agencies, including the National Weather Service, the U.S. Census Bureau and the Minority Business Development Agency. If confirmed, Raimondo would oversee the work of more than 40,000 employees.

Some lawmakers have voiced concerns about the Trump administration's work on the census. Raimondo promised to give the Census Bureau more time to crunch the numbers for the 2020 census if needed. She also promised to take politics out of the process of producing the numbers used for apportioning congressional seats among the states and the distribution of $1.5 billion in federal spending each year. Critics say the Trump administration had politicized the once-a-decade head count of every U.S. resident by trying to add a citizenship question to the 2020 census questionnaire, attempting to exclude people in the U.S. illegally from the apportionment figures and speeding up the schedule for the count and data processing.

“I believe we need to take the politics out of the census and we need to rely on the experts,” Raimondo said. “The experts and the statisticians at the Census Bureau are top notch. If confirmed, I intend to rely on them. If they advise more time is necessary, I’m going to rely on their expertise.”