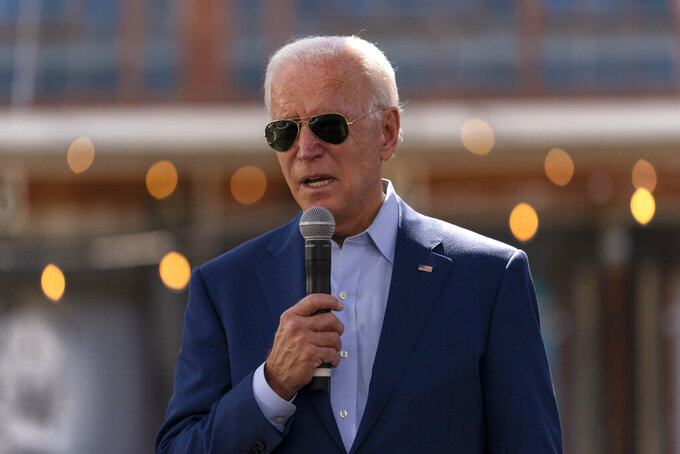 From the opening of his third presidential bid, Joe Biden has argued that he is in a unique position to mend a fractured nation and work — even with Republicans — to “unify the country” into some semblance of consensus.

That central thesis of the Democratic presidential nominee's campaign is being severely tested by the battle over the future of the Supreme Court.

In the week since liberal Justice Ruth Bader Ginsburg's death, he's faced pressure from progressives seeking bolder action. And most Republicans in the Senate, a place where Biden spent 36 years of his career, have ignored his calls to wait until after the election to approve a successor. President Donald Trump is expected to name his pick on Saturday, launching a confirmation process that may only deepen the nation's sectarian politics.

For now, Biden is holding his ground, defending the purpose and function of institutions and governing processes that are needed to install Ginsburg’s successor but appear to be fraying after years of strain.

“We have to de-escalate,” Biden said on Sunday in his first extended remarks after Ginsburg’s death. “Cool the flames … engulfing our nation.”

He followed up Monday in Wisconsin during a 25-minute speech where he didn’t mention the court at all. “We have to bring the nation together,” he said. “That’s going to be my primary job.”

The approach leaves Biden, a former senator shaped by a bygone era of Capitol Hill bonhomie, between ideological firing lines so intense as to risk overshadowing remembrances of Ginsburg as a legal giant, feminist hero and, late in her 87 years, a pop culture icon.

Whether Biden is right will determine not only his prospects in November but what kind of legislative success, well beyond judicial confirmations, he could muster once in office.

“Sometimes it sounds naïve,” said progressive labor and Democratic Party leader Larry Cohen, who supports Biden but wants him to be more forceful about overhauling how Capitol Hill works.

Biden is with his fellow Democrats in decrying a swift GOP-run confirmation so close to an election – especially given Republicans’ refusal to consider President Barack Obama’s last Supreme Court nominee, Merrick Garland, in March 2016, eight months before Election Day. Yet, at least publicly, Biden is not entertaining calls among some Democrats and progressives urging him to threaten specific retaliation.

Various groups already wanted Biden to endorse abolishing the Senate filibuster to allow anything to pass by majority vote. Now some want Biden to add the warning that a Democratic majority and President Biden would expand the Supreme Court at their first opportunity.

Even Senate Minority Leader Chuck Schumer, a consummate establishment Democrat like Biden, has declared that “nothing is off the table” if Trump and Senate Majority Leader Mitch McConnell go through with cementing a 6-3 conservative supermajority four years after denying Garland a confirmation vote. Garland would have tilted the court 5-4 in favor of Democratic appointees in 2016, with Ginsburg's death leaving a 4-4 court.

Inflaming tensions are other fundamental dynamics. Republicans hold a 53-seat Senate majority, but that group collectively represents millions fewer Americans and got millions fewer combined votes than the 47 senators in the Democratic caucus. Trump is the second consecutive Republican president not to win the national popular vote in his first election. In fact, since 1988 Republicans have won the presidential popular vote just one time: President George W. Bush’s re-election in 2004.

Advisers to Biden and Trump agree that Democrats almost certainly will win it again this year, too.

“Democracy is being restricted to the elite and their minority,” said Cohen, among the leaders pushing to end the filibuster.

Yet Biden doesn’t lament the curious turns of the nation’s institutions. Rather, he’s staked his campaign on defending the structure.

“I’m gonna say something outrageous. I know how to make government work,” Biden said at his first big rally in Philadelphia on May, 18, 2019.

Ahead of the Iowa caucuses this winter, he declared in Ames that, “Our Constitution is built in a way that literally it cannot function unless we are able to arrive at consensus.”

Indeed, as a former six-term senator and two-term vice president, Biden tells stories of back-slapping and deal-making that he contends can be reprised.

“Compromise is not a dirty word; it’s how our government is designed to work,” he told a teachers union audience this summer. “I’ve done it my whole life.”

Perhaps more accurately, Biden has been in the middle of Capitol Hill's evolution.

He was Senate Judiciary Chairman in 1987 when Democrats jettisoned a controversial Supreme Court nominee from President Ronald Reagan. Robert Bork, a favorite in conservative legal circles, got a floor vote but garnered just 42 votes, including two Democrats. Six Republicans were among the 58 nays. The move incensed conservatives and gave birth to the highly organized activist network that Republicans have used to great success in confirming their preferred jurists in recent years.

But it’s worth noting that a subsequent Reagan nominee for the same vacancy, Anthony Kennedy, was confirmed unanimously. The final vote occurred early in the presidential election year of 1988.

Bush’s signature domestic policy, the No Child Left Behind education law, had a Senate champion unthinkable today: the late Ted Kennedy, the “liberal lion” from Massachusetts. Biden often claims while campaigning that he cajoled three key Senate Republican votes for a 2009 economic rescue package when he was vice president – but just one of those senators, Susan Collins of Maine, remains in the Senate, and she faces a tough re-election battle. Obama’s signature domestic legislative win, the Affordable Care Act, got through Congress without a single Republican vote and only because Democrats managed procedural moves to avoid a final filibuster.

Now, even as Senate Republicans seemed poised to fast-track a court confirmation, Congress remains unable to agree on another economic stabilization bill amid the COVID-19 pandemic.

Those trends, Cohen argued, offer little reason to think Biden and Democratic Senate majority “could even get floor votes” on major efforts on the climate crisis, immigration law or gun regulations.

A day before Ginsburg’s death, Biden reiterated his optimism. “With President Trump out of the way” he predicted he'd find “somewhere between six and eight” GOP senators to work with a new Democratic majority.

“I’m going to be America’s president,” Biden insisted, “not a Democratic president.”