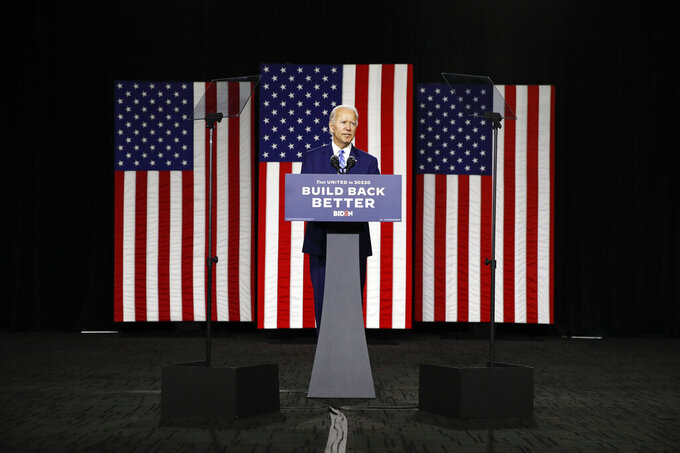 Biden, the former vice president and the Democrats' presumptive presidential nominee in 2020, ignores Trump completely in the new ad. He offers instead an uplifting message that allows voters to envision him as consoler in chief, a role that Republicans have repeatedly encouraged Trump to embrace to no avail.

“This virus is tough, but Texas is tougher,” Biden says in the ad. “I want every single American to know, if you’re sick, if you’re struggling, if you’re worried about how you’re going to get through the day, I will not abandon you. We’re all in this together.”

Trump's campaign laughed off the small new investment, and even some Democrats were skeptical of Biden's chances in Texas. Yet Biden's modest step into a state that hasn't backed a Democrat for president in 44 years reflected the extent to which the pandemic threatens to scramble the electoral map this fall.

As Democratic-led states like New York and New Jersey slow the spread, new infections and related deaths are surging across Republican-led states like Florida, Texas and Arizona that backed Trump four years ago and resisted aggressive health precautions through the spring.

Even before the outbreak, Democrats considered Florida and Arizona top targets. Texas, which Democrats have long hoped would swing their way because of demographic trends, emerged as a possible pickup only after the pandemic intensified.

Last week was the deadliest of the health crisis for Texas, and the hospital system is stretched to its limits in some regions. Republican Gov. Greg Abbott has warned that the infection numbers will likely get even worse.

"We are one of the hottest of the hot spots in the country," said Democratic congressman Colin Allred, who represents a portion of Dallas and its surrounding suburbs. “I think people in Texas can recognize what’s happening and connect the dots on who’s responsible for us having a lack of a response. And they're looking at Joe Biden as someone who has a very strong appeal.”

Still, Allred isn't ready to predict a Biden victory in Texas this November.

“I think that it’s possible. We still have a ways to go here," he said in an interview. "We will all be judged — from members of Congress to the president — on what we did and what we didn’t do during this crisis.”

The Biden campaign said the Texas ad was part of a “mid-six-figure” investment also spread across Arizona, Florida and North Carolina. It's scheduled to run in each state’s top markets on local cable and on Sunday cable shows. Spanish-language-captioned versions will run in Arizona, Florida and Texas, in addition to YouTube, Facebook and Univision.

Later in the week, the campaign plans to release a series of digital videos of Biden calling families of coronavirus victims in all four states.

“We hope that Joe Biden thinks Texas is in play, and we encourage him to spend money there,” he said. That's money Biden cannot spend, Murtaugh continued, in four states that voted Democrat four years ago where Trump is running ads to try to flip: Minnesota, New Hampshire, New Mexico, and Nevada.

“We have far more resources than Joe Biden does. He would have to outraise us by more than a million dollars a day every day until the election and he still couldn't catch us,” Murtaugh said, referencing the Trump campaign's massive cash advantage. “We encourage him to spend money in states like Texas. That is money down the drain.”

Among Biden's team, there was some internal skepticism that Texas would become a legitimate top target.

Money is a factor. Texas has nearly two dozen media markets. A serious bid there would likely require tens of millions of dollars. And beyond the campaign, outside groups aligned with Democrats have not signaled any serious interest in playing there.

Molly Ritner, the deputy states director for the Biden campaign, said Trump's mismanagement of the pandemic has helped strengthen Biden’s opportunity in states like Arizona and Texas that were out of reach for Democrats in past elections.

But it's not as if Biden was ignoring Texas until this month.

The campaign notes it has hosted more than 50 organizing events since early March, including virtual phone banks and virtual community meetings. Former Texas Rep. Beto O'Rourke has been an active surrogate in recent days, and Biden recorded a video for the state Democratic convention last month.

“What we have seen, whether it’s Texas or Arizona or Florida or North Carolina, is that Trump’s failed response to the pandemic and his complete mismanagement has taken these states ... that we thought we could have a real shot in and win, and made them even more competitive,” Ritner said. “Voters in these states are seeing firsthand what they get when they have a Trump presidency, and it’s scary.”

Texas intensive care unit physician Robin Armstrong, who sits on the Republican National Committee, notes there has been a significant increase in coronavirus-related hospitalizations in recent weeks. Many are younger people who are recovering, he said.

He called it “silly” to blame Trump for the surge.

“I think we need to blame where the virus comes from, not knowing about it a lot earlier, and so I think we’ve had a lot of failures in our bureaucracy for sure,” he said, suggesting that the medical community and local governments should shoulder more blame for not offering more consistent messages.

As for Trump's reelection prospects, Armstrong concedes that Trump's numbers are not strong — “especially in this environment right now.”

“He polls low, but in the privacy of the voting booth, his numbers will go up considerably,” he said.