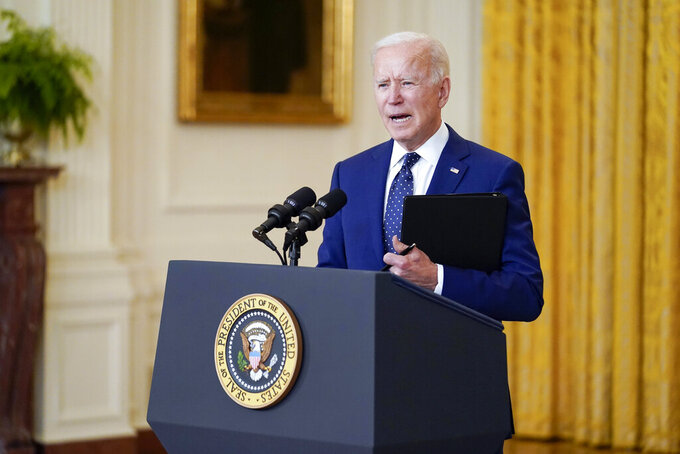 In this April 15, 2021, photo, President Joe Biden speaks about Russia in the East Room of the White House in Washington. Biden is being forced to go virtual for many of his leader-to-leader talks during the pandemic and the resulting Zoom meetings just aren't a natural fit for the back-slapping politician. Biden's big climate summit this week with dozens of world leaders is a moment for him to play cheerleader in the fight against global warming. (AP Photo/Andrew Harnik)

WASHINGTON (AP) — There will be no hands to shake or backs to slap, no way to look a foreign leader in the eye. The small human moments that define statecraft will be reduced to images on a screen.

President Joe Biden, a most hands-on politician, this week will host a major climate summit with dozens of world leaders — all of them stuck on Zoom.

Biden has made clear that he wants to reassert U.S. leadership on the world stage, including on climate change, after four tumultuous, often inward-looking years of President Donald Trump. But as much as the White House staff has tried to dress up the remote meetings he has held so far, while eyeing the climate summit Thursday and Friday as an important moment, the president has made no secret of how much he misses diplomacy with a more personal touch.

“I greatly appreciate the chance to spend time with you in person and to exchange our ideas face to face,” he added.

Biden has expressed to aides and advisers how much he misses the in-person interactions and friendly asides that typically happen on the sidelines of international meetings, moments that can often lead to foreign policy breakthroughs, according to three White House officials not authorized to speak publicly about private discussions. He was disappointed, at times, with the stilted nature of his first remote bilateral meeting, held with Canada’s Justin Trudeau in February.

The White House has announced that South Korea’s Moon Jae-in will travel to Washington in May for Biden's second in-person foreign leader meeting. And there are hopes the president will make his own overseas trip in June. But until then, expectations for major diplomatic developments have been reined in — and the climate summit is no exception.

Streamed 100% live with no backroom give-and-take, the summit will be more geared to sending a message about America’s return to the climate fight and nudging the world toward a greener planet than about specific deals or action.

The world is still trying to figure out what the climate gathering will be, but experts know what it’s not: Don't expect negotiations akin to those that produced the historic 2015 Paris climate accord.

In Paris, “every comma, every period and every sentence was negotiated 100 times,” said Christiana Figueres, the former U.N. climate chief who was one of the chief architects behind the 6-year-old pact. By contrast, this week's summit, she says, “is a public confirmation of intent for every country to come forward with its current best effort."

Climate activists may hope for dramatic moments when countries like Japan, South Korea or even China are suddenly inspired by Biden and announce they will stop funding other nations’ coal power plants. But Henry “Jake” Jacoby, who cofounded the MIT Center for Global Change Science, just laughs at the idea: “On a Zoom call with 40 nations of the world watching? Yeah, not a chance.”

The summit instead is about planting seeds for a November climate meeting in Scotland, where expectations and stakes are higher. But because of in-person restrictions due to the coronavirus pandemic and the short time period since Biden took office, this week's meeting is more of a show-and-tell among leaders, all streamed to whomever wants to watch it. The real action comes later.

The bulk of the diplomacy over the next seven months will be done not by presidents, but behind the scenes by diplomats, such as the recent travels by special U.S. climate envoy John Kerry, said Nigel Purvis, a former State Department climate negotiator in the administrations of Bill Clinton and George W. Bush.

The in-person meetings in Scotland are meant to pull everything together, which still could work, U.N. Secretary-General Antonio Guterres said Monday.

Biden has made clear he understands the necessity of doing meetings remotely: first, to safeguard the health of the leaders as well as the large traveling party that comes with a visit from a head of state. Moreover, keeping things remote helps set an example that his administration is still discouraging travel amid a rise in virus variants and COVID-19 cases.

But he has not always enjoyed the virtual substitutes. He struggled with the mute button at a remote fundraiser and watched as German Chancellor Angela Merkel forgot to silence her own feed and interrupted British Prime Minister Boris Johnson during a virtual Group of Seven leaders' meeting in February.

Biden’s foreign policy outreach to this point has lacked the small moments amid summits and state visits meant to flatter and make memories for foreign dignitaries.

President Barack Obama took Dmitry Medvedev to a burger joint in 2010 when the Russian president visited Washington. Obama's younger daughter, Sasha, who was studying Chinese at her private D.C. school at the time, had a memorable moment trying out some simple phrases with China’s Hu Jintao during his 2011 state visit.

Vladimir Putin’s 2001 visit to George W. Bush’s ranch in Crawford, Texas, included a barbecue dinner, a lesson on how to dance the Cotton-Eye Joe and a ride in the Republican president’s pickup truck.

Such moments are difficult to create in the pandemic era, but that hasn’t stopped Biden and his team from trying to bring some small flourishes to virtual statecraft. For example, Biden opened his recent virtual meeting with the leaders of Australia, India and Japan with a video of George W. Bush talking about the coalition’s beginnings after the 2004 earthquake and tsunami in the Indian Ocean. It was part of an effort to stress bipartisanship and continuity in the alliance.