Bieber in camp with Indians after COVID-19 quarantine 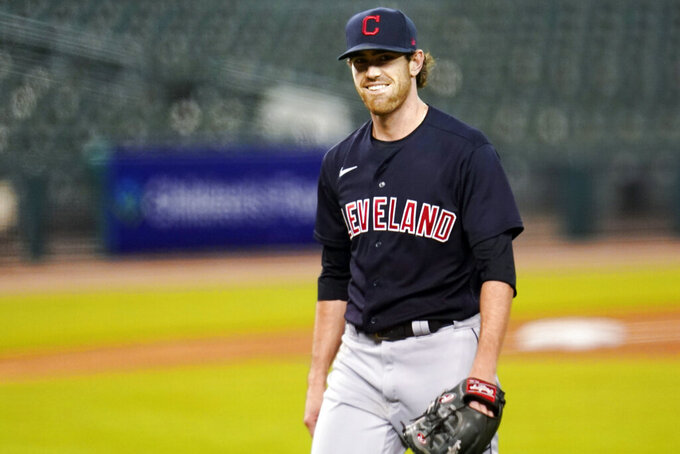 FILE - In this Sept. 17, 2020, file photo, Cleveland Indians pitcher Shane Bieber smiles as he walks to the dugout in the fourth inning of a baseball game against the Detroit Tigers in Detroit. Bieber has reported to training camp with the Cleveland Indians after recovering from COVID-19. The right-hander took part in drills on Saturday, Feb. 20, 2021, a day before the Indians hold their first full-squad workout in Goodyear, Ariz. (AP Photo/Paul Sancya, File)

CLEVELAND (AP) — Cy Young winner Shane Bieber reported to training camp on Saturday with the Indians after the right-hander was quarantined with COVID-19.

Bieber, who was baseball's best pitcher in 2020, was medically cleared and joined Cleveland's other pitchers and catchers in Goodyear, Arizona. The 25-year-old recently tested positive with the virus, but only experienced mild symptoms.

Bieber spent part of the winter working out at the team's training complex, and manager Terry Francona said his ace will resume a normal work schedule.

“He was actually able to throw a bullpen I think in his backyard when he was down,” said Francona, who is recovering from a staph infection in his toe. "So he’s not behind. I do think that being in this environment is more conducive to better work, but we’ve all seen Biebs.

"He’s going to get it done wherever. That’s not an issue.”

Bieber took part in non-throwing, fielding practice on his first day. The Indians will have their first full-squad workout on Sunday.

Dominant during the pandemic-shortened 2020 season, Bieber led the majors with eight wins, a 1.63 ERA and 122 strikeouts, a rare Triple Crown for pitchers.

Bieber will be expected to carry the load again this season as the Indians try to get back to the postseason after making it as a wild card in 2020. Cleveland has one of the AL's best starting staffs, led by Bieber, who is 34-14 in three major league seasons.

“I do think as he learns the league and learns himself, you will see improvements because he’s that kind of kid," Francona said. "He’s conscientious and smart, and he has the drive to want to be great. So I think you’ll see some things he’ll improve on this year for sure.”

NOTES: Projected closer James Karinchak also cleared COVID intake and reported. Francona said it's possible he'll use the hard-throwing right-hander in non-save situations as well, something the manager has done in the past with Cody Allen and Adam Miller. ... Francona is on crutches following surgery to remove the infection from his big left toe. Doctors had him try two different devises to help him get around. “One was a thing you kneel on and it has wheels, but it also has a basket on the front,” Francona said. “And as much as that may have helped me get around the complex, I was not going to take that amount of grief.”