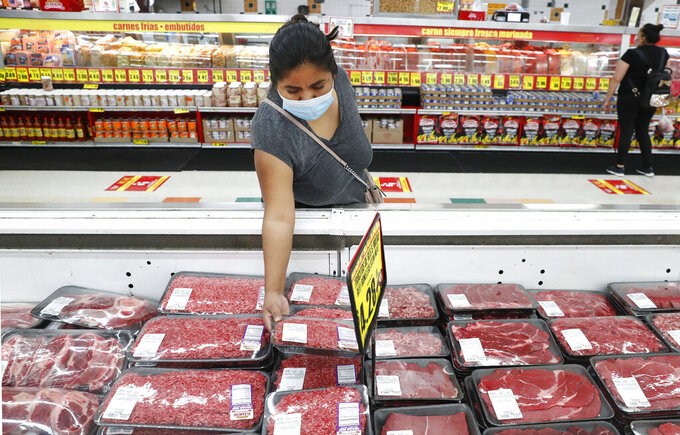 FILE - In this April 29, 2020 file photo, a shopper wears a mask as she looks over meat products at a grocery store in Dallas. Wholesale prices rose a higher-than-expected 0.6% in April, driven by a sharp rise in food costs. The increase, reported Thursday, May 13, 2021, by the Labor Department, followed a sizable 1% advance in March.(AP Photo/LM Otero, File)

WASHINGTON (AP) — Wholesale prices, driven by escalating costs for services and food, jumped 0.6% in April, surprising economists and providing more evidence that inflation pressures are starting to mount with the country emerging from a recession brought on by the pandemic.

The increase in the producer price index, which measures inflationary pressures before they reach consumers, was double the 0.3% gain that economists had been expecting. The increase, reported Thursday by the Labor Department, followed a sizable 1% advance in March.

Over the past 12 months, wholesale prices are up 6.2%, the largest advance since the data was first calculated in 2010.

Food prices shot up 2.1% in April, the biggest monthly tick higher since a similar increase last October. Costs for things like airline services and food retailing services climbed 0.6%. Two-thirds of the increase in wholesale prices was attributed to the jump in the overall cost of such services.

Energy prices fell 2.4% after a string of big gains that began in December. Economists believe that energy prices will resume their upward march soon, reflecting among other things the temporary shutdown of the nation's largest fuel pipeline due to a cyberattack.

Core inflation, which excludes volatile food and energy costs, rose 0.7% in April, reflecting widespread price pressures that are showing up as demand increases with the wider reopening of the economy. Over the past 12 months, core inflation at the wholesale level is up 4.1%.

The report on wholesale inflation came a day after the government reported that consumer prices shot up 0.8% in April, the largest monthly jump in more than a decade, with one-third of the gain attributed to a record 10% increase in used car prices.

Federal Reserve officials including Fed Chairman Jerome Powell insist that the recent price increases will be temporary as the economy reopens, and not a sign that inflation is getting out of control.

Yet rising prices have jarred Wall Street, which just registered three days of losses and the biggest one-day drop in the S&P 500 since February. Investors fear rising prices will force the central bank to abandon the ultra-low interest rate policies put in place to support the economy after pandemic shutdowns forced millions of people out of work.

However, private economists said despite the reports this week of sizable gains in consumer and wholesale prices, they still believe the price surge is temporary.

“Since we believe much of the acceleration in inflation will be transitory, we share the Fed's view that this isn't the start of an upward inflationary spiral,” said Mahir Rasheed, an economist at Oxford Economics. “We look for the pace of inflation to gradually cool heading into 2022.”