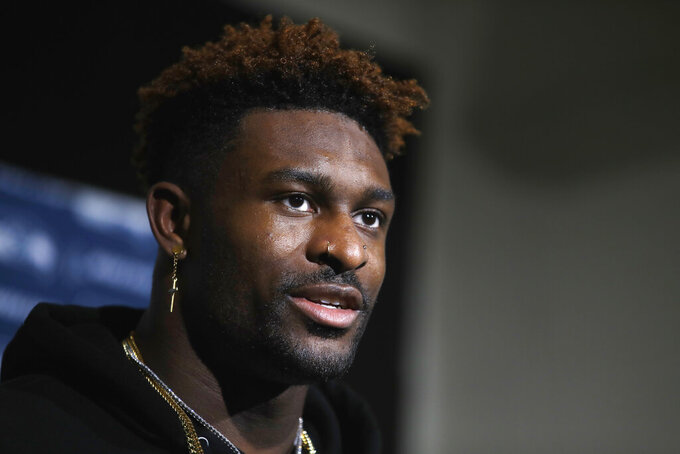 FILE - In this Jan. 5, 2020, file photo, Seattle Seahawks' D.K. Metcalf speaks during a news conference after an NFL wild-card playoff football game in Philadelphia. Metcalf says the best advice he received as a rookie was to sit and observe. Metcalf shared some of his experiences from last year with 547 rookies on the NFL's rookie webinar held virtually after the draft. (AP Photo/Matt Rourke, File)

D.K. Metcalf says the best advice he received as a rookie was to sit down last at team meetings.

Metcalf shared his experience as a first-year wide receiver for the Seattle Seahawks with 547 players in the NFL’s first rookie webinar after the draft last month.

Tracy Perlman, the NFL senior vice president of football communications and marketing, said two questions rookies asked most were focused on social media use and the best way to assimilate themselves into a locker room.

“I think Mo told us in our rookie meeting: ‘Don’t sit nowhere. Let everybody come in first and sit down. Then you find your seat last,’” Metcalf said. “So that really set the tone for the year and how to approach everything. Just wait my turn and soak up as much knowledge from the vets as I could.”

Kelly explained why he gives that advice.

“It’s a humbling experience,” he said. “These guys are the best of the best in college football and so they come into the league and everybody has a story. (But) really, nobody cares that you won a national championship before. You’re entering into a business world and into a world of professional athletes. So these guys were collegiate athletes and they come into this room and they used to be the best of the best, and now they have to sit back, observe and find a way to fit in.”

Metcalf warned rookies about their use of social media.

“I told them you can’t make everybody happy,” he said. “You’re building a brand and you have to protect that brand, so if somebody calls you out on Twitter or Instagram, you can’t respond. Use social media for a positive impact on your life and other people’s lives and not a negative one.”

Metcalf also cautioned them about finances.

Metcalf slipped to the final pick in the second round of the 2019 draft for various reasons, then quickly made all the teams that passed on him regret their decisions. He had 58 catches for 900 yards and seven touchdowns in the regular season. Then he helped Seattle beat Philadelphia on the road in an NFC wild-card playoff game with seven receptions for 160 yards and one TD. The Eagles drafted wideout J.J. Arcega-Whiteside seven spots ahead of Metcalf. Arcega-Whiteside had 10 catches in 17 games.

This year’s rookie class has unique challenges because of the coronavirus pandemic. Most pro days were canceled and team visits were held virtually.

“I told some guys it’s a good thing and a bad thing, because what I learned last year about the whole draft process is people are looking for something bad to point out about you no matter what it is,” Metcalf said. “So the less opportunity teams had to nitpick anything you did wrong was a better position for you. But for the guys who didn’t get invited to the combine, who only had a chance to show what they could do at pro day, that’s the other bad part about it, so there’s two ways you can look at it.”

The rookie webinar was one of five professional development and educational webinars for current and former players the NFL held virtually in March and April. The rookies also heard from Perlman; Troy Vincent, the league’s executive vice president of football operations; Carla Lide-Buglione, the league’s player engagement coordinator; and Don Davis, the NFL Players Association senior director of player affairs.

“Due to the current situation with social distancing, these webinars are critical to the transition from being a student athlete to becoming a professional athlete,” Vincent said. “This platform meets the athletes on the device of their choice and delivers onboarding curriculum and resources essential to their entire playing experience.”

Overall, more than 1,600 past and present players registered for the five interacative sessions that covered finances, real estate, mental health, community engagement and the rookie webinar. Spouses, girlfriends and partners also were invited to participate.

“It was really valuable to have the significant others on the phone because you get a lot of questions from them,” Perlman said. “The idea for us is to make sure that we continue to build this community of care around players where they understand that we have the resources and we want to give them the information, and we want to have subject matter experts talk them through it. So I think that they were really successful.”