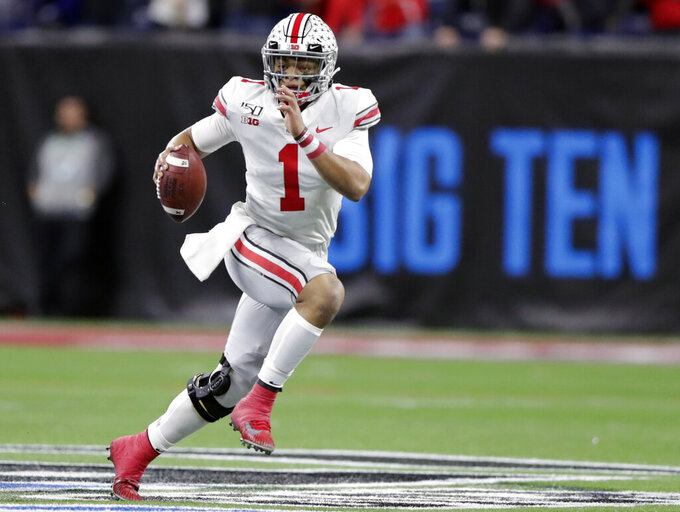 FILE - In this Dec. 7, 2019, file photo, Ohio State quarterback Justin Fields (1) runs with the ball against Wisconsin during the first half of the Big Ten championship NCAA college football game, in Indianapolis. The Big Ten won't play football this fall because of concerns about COVID-19, becoming the first of college sports' power conferences to yield to the pandemic. The move announced Tuesday, Aug. 11, 2020, comes six day after the conference that includes historic programs such as Ohio State, Michigan, Nebraska and Penn State had released a revised conference-only schedule that it hoped would help it navigate a fall season with potential COVID-19 disruptions. (AP Photo/Michael Conroy, File)

A group of Ohio State football players' parents Saturday joined parents of players at Iowa in calling for the Big Ten to overturn its decision not to play this fall because of the pandemic.

The Football Parents at Ohio State posted on social media a letter to Big Ten Commissioner Kevin Warren, calling for the reinstatement of the 10-game schedule the conference unveiled six days before it postponed football until spring.

“We believe that the protocols put in place by Ohio State Athletics has provided an extremely safe environment for our players to prepare for the season," the letter said.

The letter also asked for the release of all medical data and information the Big Ten used to make its decision, a meeting with Warren for senior players and their parents, and to permit athletes who want to play to sign a COVID-19 liability waiver.

“Football is a game of risk. Our sons work extremely hard for the opportunity to play and fully understand the risks involved when they step on the field. Their personnel decisions should be acknowledged and honored to give them the opportunity to compete as athletes in the game they love," the parents wrote.

The parents of Iowa players sent a similar letter Friday.

“The fact that the Big Ten and the Council of Presidents and Chancellors made this decision with no input from those assuming these risks is appalling,” the letter said.

The Big Ten has received the two letters.

Tom Mars, an attorney who has helped players such as Ohio State quarterback Justin Fields with NCAA transfer eligibility waiver claims, has been advising some of the parents of Big Ten players fighting for their sons' seasons.

The NCAA two weeks ago announced that it would not permit its schools to require athletes to sign away legal rights related to COVID-19 before competing this season. Recent players’ rights movements, such as We Are United in the Pac-12 and Big Ten United have called for on conferences to prohibit such waivers.

Earlier this week, a group of Senators, led by New Jersey Democrat Cory Booker, announced the framework of possible federal legislation of college sports. Part of the College Athletes Bill of Rights would prohibit schools requiring athletes to give up legal rights.

“The parental feedback today about a ‘liability waiver’ cold not be more different than it was when Ohio State's Buckeye Pledge was the subject of intense criticism," Mars said.

Mars said the attitude among parents has gone from suspicious of anything that could be construed as a waiver to “Where do I sign,” he said.

In Norman, Oklahoma, Riley announced on Aug. 8 the Sooners were temporarily pausing preseason practices because of schedule changes. He gave players the option of returning home, though he said 75% stayed on campus.

After the initial testing in preparation for the July 1 start of workouts, the program had just one positive result until this week. There were two rounds of tests last week, with one positive in 205 tests.

“It’d be pretty easy to say right now that I regret it,” Riley said of giving the players a break. “I also feel like if I keep a team hemmed up here for a six or seven week training camp that I’d probably regret that too.”

Riley said the outbreak showed the challenges that lie ahead when players cannot be kept in a virus-free bubble the the NBA and NHL are operating.

“I think what we’re up against is something that’s doable, but the key is going to be for our players, our staff ... how well can this virus be mitigated or stopped or contained when players or staff members are not in our facilities?” Riley said.