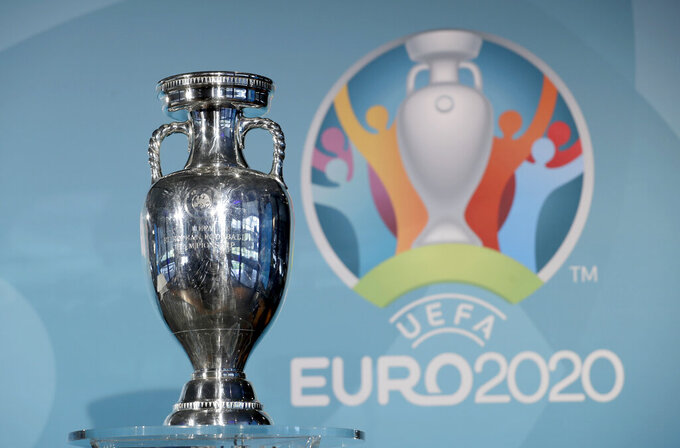 FILE - In this Thursday, Oct. 27, 2016 file photo, the Euro soccer championships trophy is seen in front of the logo during the presentation of Munich's logo as one of the host cities of the Euro 2020 European soccer championships in Munich, Germany. With 100 days to go, UEFA is pushing ahead with staging the European Championship across the continent. All 12 cities, however, might no longer make the cut. Bilbao, Dublin and Glasgow risk being dropped over the lack of guarantees about the number of fans that could be allowed into stadiums by June 2021. (AP Photo/Matthias Schrader, File)

With 100 days until the rescheduled European Championship, UEFA is considering cutting three cities from its list of 12 host venues across the continent.

Bilbao, Dublin and Glasgow are at risk of being dropped over the lack of guarantees about the number of fans that could be allowed into stadiums by June, people with knowledge of the tournament planning told The Associated Press on Wednesday. They spoke on condition of anonymity to discuss the situation ahead of a looming deadline for UEFA to receive the plans from host countries.

UEFA wants the hosting plan settled within weeks after being forced to postpone its showpiece tournament last year due to the pandemic. The governing body would like stadiums to have at least half of the seats filled — despite much of Europe still playing games in empty venues due to ongoing coronavirus restrictions. UEFA is willing to take games away from cities that cannot guarantee a significant number of spectators based on an expected easing up of the pandemic by June.

Although Britain has had Europe’s deadliest outbreak, its vaccination program is the fastest in Europe which has raised UEFA's confidence in London's staging of seven games at Wembley Stadium, including the semifinals and final in July.

The British government has plans for up to 10,000 fans to return to stadiums from May but more seats could be filled within weeks, dependent on trials of coronavirus testing for fans and plans to lift many social contact restrictions from June 21. But that only applies to England, with Scottish authorities adopting a more cautious path out of lockdown and offering no indication when fans could be allowed back into sports venues.

“We’ll see whether or not it’s possible at any point along that road for fans to actually be present to witness (the Euros),” Scottish Health Secretary Jeane Freeman said Wednesday.

But that uncertainty in Scotland, whose leader Nicola Sturgeon is mired in a political crisis, has left UEFA weighing the option of stripping Hampden Park in Glasgow of its four matches. The three games in the group stage and the last-16 encounter could move south of the border to England in a blow to the Scots after qualifying for their first men's tournament since the 1998 World Cup.

UEFA could use another London location, with the country's newest large venue — the 62,000-capacity home of Tottenham — an option. Stadiums in Manchester or Liverpool would also be considered to spread the additional games, especially if UEFA decides to shift the four games slated for Dublin's 51,700-capacity Aviva Stadium across the Irish Sea to England.

UEFA has yet to receive positive information from Irish authorities with the ban on fans attending games running through April 5.

“The public health advice is that it is too early to say how and when these restrictions should be eased given current uncertainties,” the Irish government said in a statement to the AP.

"At the request of UEFA, Dublin’s hosting partners ... are examining possible scenarios for staging the games scheduled for Dublin in this COVID-19 environment. We are in constant dialogue with UEFA and our intention is to work to finalize our best possible scenario consistent with public health guidelines.”

British Prime Minister Boris Johnson, who has been in contact with UEFA President Aleksander Čeferin, said this week “we’re certainly on” for hosting additional games.

UEFA is also in contact with Spain's Basque Country but has yet to receive assurances about fans attending matches in Bilbao, which is also due to stage four games across the group stage and round of 16. That has left UEFA assessing moving Bilbao’s games elsewhere in Spain.

Basque Country officials gave no indication Wednesday of being rushed into approving the return of spectators, instead sticking to a cautious approach determined by the health conditions.

“With three months to go, we must be cautious,” the Basque government told the AP. “But we will continue to work with UEFA and other venues to see if European Championship matches can be held with fans, what the capacity limits will be and under what conditions.”

La Liga President Javier Tebas said Tuesday he was hopeful of some fans returning to matches in his competition before the end of the domestic season in May.

There had already been discussions in the Basque Country about the limited prospect of an economic boost from staging Euros games. On top of that, Spain's national team has lacked popularity in a region with a strong separatist movement.

These Euros have a unique format after UEFA veered from its usual preference of hosting the tournament in one or two countries under a logistically-complex plan instigated in 2012 by then-President Michel Platini.

The new format provided an opportunity to stage games in some countries that wouldn’t necessarily have a chance to host the tournament on their own. But the pandemic has complicated the hosting arrangement even further.

UEFA says it plans an announcement in April on how the pandemic-era tournament will look and the ability for fans to attend games, having already sold tickets. UEFA announced in January that tickets would be refunded for games moved more than 50 kilometers (31 miles) from the original venue.

The Euros are scheduled to open in Rome on June 11 with Italy playing Turkey.

Long before the pandemic, Brussels was stripped of hosting because its planned new stadium wasn't going to be built, with the four games handed to London.