Bills agree to sign Trubisky as backup to Josh Allen 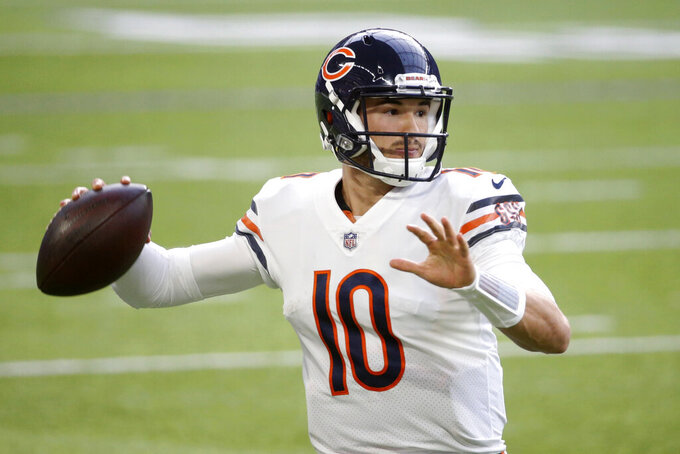 BUFFALO, N.Y. (AP) — After four sometimes rocky seasons in Chicago, Mitch Trubisky is getting an opportunity to re-establish himself as Josh Allen’s backup in Buffalo.

The Bills used what little space they had left under the salary cap to upgrade their quarterback depth by agreeing to sign Trubisky to a one-year contract on Thursday.

The addition provides the championship-minded Bills valuable insurance in the event Allen gets injured in their quest to build on reaching the AFC championship game for the first time in 27 years. Trubisky gets the luxury of developing in Buffalo’s pass-first offense, and a fresh start after the Bears cooled on the North Carolina product they selected with the No. 2 pick in the 2017 draft.

“Listen, I don’t know what all went on in Chicago, good, bad. But he started 50 games and won 29,” general manager Brandon Beane said.

“This is a great reset for him, and we don’t expect him to be here long term,” Beane added. “Hopefully, in a year he’ll get a chance to go back and land a nice contract and a starting job somewhere.”

After going 11-3 and leading the Bears to their first playoff berth in seven years in 2018, Trubisky regressed in going 14-10 over his final two seasons. His future in Chicago was placed into question last year when the Bears declined to pick up the fifth-year option on the quarterback’s contract, while also acquiring Nick Foles in a trade with Jacksonville.

Trubisky was benched in a Week 3 comeback win at Atlanta and didn’t resume playing until late November. He finished 6-3, Chicago went 8-8 and earned a wild-card playoff spot. The 26-year-old was not re-signed and the Bears signed Andy Dalton to a one-year, $10 million contract.

In Buffalo, Trubisky replaces veteran Matt Barkley, who was not re-signed after spending the past two-plus seasons as Allen’s backup.

Beane noted the 6-foot-2, 215-pound Trubisky has similar strong-armed and mobile traits as Allen, who is coming off a breakout season. The third-year starter set numerous single-season passing and scoring records in leading Buffalo to a 13-3 mark.

“I hope Josh plays all 16 games,” Beane said. “If that happens, it’s a luxury. But you never know. ... So you want to have as much quality depth as you can.”

Trubisky’s addition marks yet another offseason in which Beane has taken a methodical approach to upgrading his roster, particularly on offense.

Two years ago, the Bills made a big splash in free agency by retooling their entire offensive line while adding receivers John Brown and Cole Beasley. Last year, Beane dealt a first-round pick to Minnesota to acquire Stefon Diggs, who became Buffalo’s first player to lead the NFL in yards receiving (1,535) and catches (127), becoming an All-Pro.

Though Beane was forced to cut Brown and defensive lineman Quinton Jefferson to free up cap space, he filled Brown’s departure by signing veteran Emmanuel Sanders.

The moves essentially keep intact a team that won its first AFC East title in 25 years and made the playoffs for the third time in four seasons.

“It’s a business, and you can’t keep them all,” Beane said. “But for us to retain as many as we did, that’s exciting.”

NOTES: Beane confirmed veteran defensive lineman Star Lotulelei is returning after opting out last year due to COVID-19 health concerns. ... The Bills agreed to a one-year deal to re-sign backup running back Taiwan Jones, who spent much of last season playing on special teams. ... Beane acknowledged he had brief discussions to gauge free agent tight end Rob Gronkowski’s interest to sign with his hometown team before re-signing with Tampa Bay. “I think there was some interest, but at the end of the day, it probably would have been an upset for him to leave Tom Brady,” Beane said.