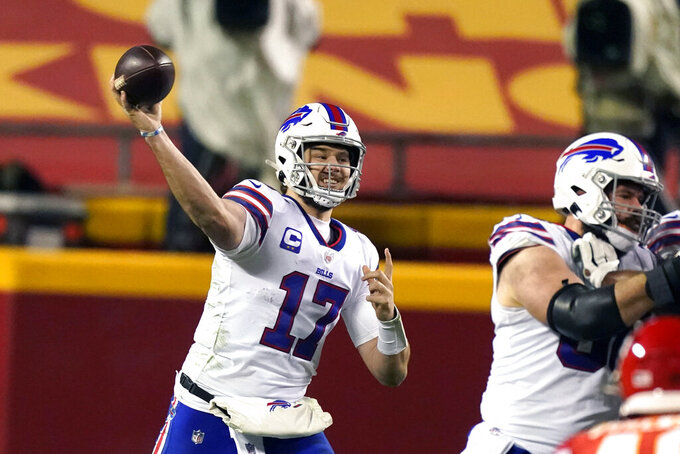 FILE - In this Sunday, Jan. 24, 2021 file photo, Buffalo Bills quarterback Josh Allen throws a pass during the second half of the AFC championship NFL football game against the Kansas City Chiefs in Kansas City, Mo. Buffalo Bills quarterback Josh Allen is still debating whether to receive the COVID-19 vaccine, and believes the decision be left to personal choice. Allen shared his views Wednesday, April 7, 2021 during an hour-long interview on The Ringer podcast hosted by Kyle Brandt, when asked about the NFL electing not mandate its players to be vaccinated. (AP Photo/Charlie Riedel, File)

BUFFALO, N.Y. (AP) — Buffalo Bills quarterback Josh Allen is still debating whether to receive the COVID-19 vaccine, and believes the decision be left to a personal choice.

Allen shared his views during an hour-long interview on The Ringer podcast hosted by Kyle Brandt on Wednesday, when asked about the NFL not mandating its players be vaccinated.

“I think everybody should have a choice to do it and not to do it,” Allen said, speaking by video from his offseason home in California.

“You get in this tricky situation now where if you do mandate that, that’s kind of going against what our Constitution says, and the freedom to kind of express yourself one way or the other,” he added. "I think we’re at a time where that’s getting a lot harder to do. I don’t know, everybody should have that choice.”

Allen’s comments come at a time President Joe Biden pushed up a deadline to April 19 for states to make all adults eligible for coronavirus vaccines, while warning Americans the nation is not yet out of the woods when it comes to the pandemic.

The president also said no one should fear mutations of the coronavirus that are showing up in the U.S. after being discovered in other countries. He acknowledged that the new strains are more virulent and more dangerous, but said “the vaccines work on all of them.”

“That’s the way to beat this,” Biden said. “Get the vaccination when you can.”

At the NFL level, the league is planning to eliminate some restrictions from its current COVID-19 protocols for vaccinated players, coaches and personnel. Among the elements that could be eliminated are the need to participate in daily testing; quarantine periods due to close contact with an infected individual; and/or refraining from social gatherings among other vaccinated individuals.

“We will be encouraging all personnel to get vaccinated and working with the players association on all these issues,” NFL Commissioner Roger Goodell said last week. “We are also using our platforms publicly to talk about the importance of getting vaccinations.”

The 24-year-old Allen said he wants to look further into the statistical data before determining whether he’ll be vaccinated.

“I’m still debating that,” the third-year starter said. “If the statistics show it’s the right thing for me to do, I’d do it. And I’d lean the other way, too, if that’s what it said.”

In other topics, Allen weighed in on his contract status by noting he is eager for the Bills to open discussions regarding an extension.

Allen is entering the fourth year of his rookie contract, with Buffalo having until May 3 to pick up a fifth-year option on the deal for the 2018 first-round draft pick. General manager Brandon Beane hasn’t ruled out the possibility of opening talks at some point after the upcoming NFL draft.

“If they called up and wanted to talk tomorrow, I’d be willing. But we’ll see. We’ll cross that bridge when we get there,” Allen said. “I’d obviously love to be locked down in Buffalo for a very long time. It’s a place that I call home. I love being there. I love the fanbase. I love the city. Everything I want is there.”

Allen is coming off a breakout season in which he established numerous team scoring and passing records in leading the Bills to win their first AFC East title in 25 years and reach the conference championship game for the first time since the 1993 season.

Buffalo’s season ended with a 38-24 loss at Kansas City, a result which still sticks with Allen.

“Every day. I think about it all the time: where we were; where we could’ve been,” he said.

“I think it’s just another step in the gradual progression,” Allen added. "You see what our front office has done this offseason in giving us the tools to go back and be ready to compete and try to go out there and do that again.”