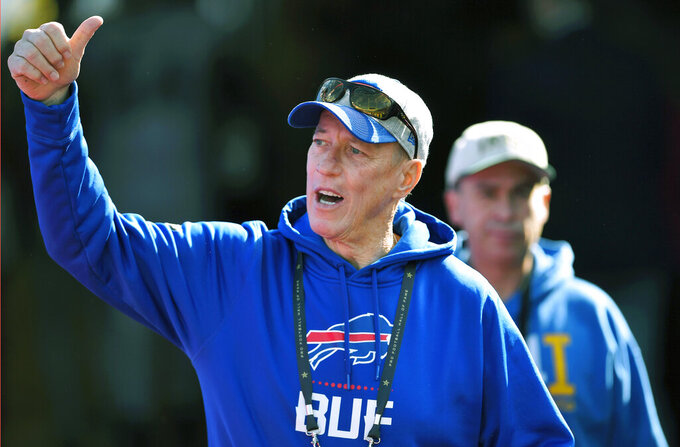 FILE - In this Oct. 20, 2019, file photo, former Buffalo Bills quarterback Jim Kelly walks on the field before an NFL football game between the Bills and the Miami Dolphins in Orchard Park, N.Y. The Bills’ return to relevance gives rise to reflection from those who were part of the franchise’s heyday in the late 1980s and 1990s, during which Buffalo made — and lost — four consecutive Super Bowl appearances. “Way too long? Hah, 25 years? I would say it’s waaaaay, way, way past due,” Hall of Fame quarterback Kelly said of the last time Buffalo won the East. “Never in a million years did I think it would take 25 years to come back.” (AP Photo/Adrian Kraus, File)

ORCHARD PARK, N.Y. (AP) — Mary Wilson is taken aback by how many people have begun noticing the clutch, emblazoned with the Bills' charging buffalo logo, she carries while running errands from her winter home in Florida.

“I’m not trying to advertise or anything, but it’s like `Oh, you’re a Bills fan. Your team’s doing so great,‘” she told The Associated Press by phone. “I’m so popular now because I’m a Bills fan.”

Some might not realize how Wilson’s connections to the Bills go far deeper.

She’s the widow of the team’s late owner and team founder, Pro Football Hall of Famer Ralph Wilson, and served as the franchise’s controlling owner following his death in March 2014 before the Bills were sold to Terry and Kim Pegula for a then-NFL-record $1.4 billion later that year.

Describing herself as “just a fan” now, Mary Wilson can imagine what Ralph might make of the Bills closing in on their first AFC East title in 25 years.

“He would be over the moon. He would be having so much fun,” she said.

At 10-3, the Bills are in position to clinch the division and third playoff berth in four years by simply beating Denver (5-8) on Saturday.

The franchise’s run of newfound success coincides with the arrival of coach Sean McDermott and GM Brandon Beane in 2017, and followed what was the Bills' bleakest era. Buffalo went 17 years without a playoff appearance, which stood as the longest active drought in North America’s four major professional sports.

The Bills’ return to relevance gives rise to reflection from those who were part of the franchise’s heyday in the late 1980s and 1990s, during which Buffalo made — and lost — four consecutive Super Bowl appearances.

“Way too long? Hah, 25 years? I would say it’s waaaaay, way, way past due,” Hall of Fame quarterback Jim Kelly said of the last time Buffalo won the East. “Never in a million years did I think it would take 25 years to come back.”

Then again, Kelly noted, no one expected how dominant the New England Patriots would become under coach Bill Belichick and quarterback Tom Brady. The two oversaw a franchise that won 17 division titles and six Super Bowls before Brady departed for Tampa Bay this offseason.

And yet, Kelly said, the Bills were in position to take over the division because of the methodical approach McDermott and Beane have taken to rebuilding the roster through the draft and free agency.

To some degree, he said, it reminds him of the potential the Bills began showing under the Hall of Fame tandem of coach Marv Levy and GM Bill Polian following a 12-4 finish in 1988. It was Kelly’s third season in Buffalo on a team that featured a foundation of eventual stars: defensive end Bruce Smith, running back Thurman Thomas and receiver Andre Reed, all enshrined in Canton.

“Yeah, you can compare it to a certain point, but time will only tell,” Kelly said. “But I hope time will take this to where we get that opportunity again to bring that Lombardi Trophy home.”

The Bills’ roster features a mixture of youth in quarterback Josh Allen, middle linebacker Tremaine Edmunds and cornerback Tre’Davious White, and a collection of established veterans. There’s the safety tandem of Jordan Poyer and Micah Hyde, and a receiver group made up of Stefon Diggs, Cole Beasley and John Brown.

What impresses Levy most is the stability the Bills have at the top.

“There’s always similarities when success takes place,” said Levy, who retired after the 1997 season as the Bills' winningest coach before returning to serve a two-year stint as GM starting in 2006. “They used to give me a lot of credit for the team winning, and I’d say, `Fine, thank you. I appreciated it. But it isn’t a great coach that wins, it’s total organization. So things are going well, I’m sure, inside the organization to help it succeed.”

It's no surprise McDermott maintained his game-at-a-time focus this week by saying his attention is squarely on Denver, deflecting questions about the significance of winning the division title. For Allen, winning the East is but one step toward a bigger objective.

“We understand what’s at stake every time we step on the field,” he said. “But having said that, there’s three games left. It’s not the end all, be all, we won the AFC East, let’s celebrate.”

The significance of a division crown isn’t lost on the Bills’ old guard.

“When I turn on the TV on Sunday and hear the pregame shows mentioning Buffalo in a positive light instead of being the doormat of the East, it’s a great feeling to have that association with the team,” former linebacker Cornelius Bennett said. “It’s like raising a child and somebody pats you on the back because the child is progressing. It’s a good feeling.”

For more than 50 years, the Bills were Ralph Wilson’s baby. Established in 1960 as one of the founding members of the American Football League, Buffalo won AFL championships in 1964 and ’65. But the team struggled to find competitive consistency, aside from the Kelly era.

In his latter years, Wilson blamed himself for poor decisions in hiring inexperienced GMs in Levy, followed by Russ Brandon before bringing in Buddy Nix in 2009.

In 2010, following an 0-5 start under first-year coach Chan Gailey, Wilson told The AP it was likely going to take another three years to build a winner, while noting, “I probably won’t be around.”

Alas, it took a little longer.

Mary Wilson was introduced to the Bills at the start of their Super Bowl run. She was Wilson’s date to the 1991 Super Bowl, which Buffalo lost 20-19 to the New York Giants. She's now a season-ticket holder and had attended every home game until this season with fans not allowed because of the coronavirus pandemic.

“Ralph would be having so much fun with this. And not only that, the Pegulas have made such a great move with the general manager and the coach and the integrity (they have),” she said.

“And I do believe that Ralph’s spirit is seeing this,” Wilson said, before closing the conversation with a simple: “Go Bills.”