Bills pile up for Georgia lawmakers as key deadline looms 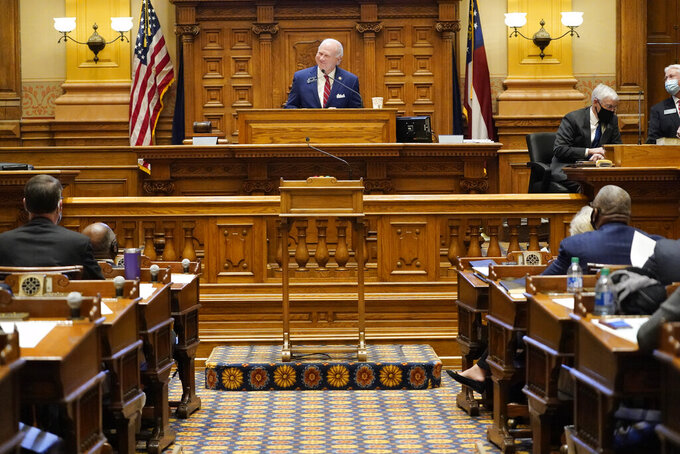 ATLANTA (AP) — While election legislation has dominated discussion in the 2021 General Assembly, Georgia lawmakers have a lot of other work to accomplish in the next week. An annual deadline called crossover is looming on March 8. By then, bills must by passed by their original chamber or fail for the year. That doesn't mean the issue that a bill dealt with is dead for the year, as there are ways to revive legislation that had appeared dead. But when a bill fails to advance from the original chamber, it can often show a lack of support. Some measures have already passed one chamber, including paid parental leave for state and school employees, and a renewal of Georgia’s law protecting businesses and others from being sued if someone blames them for contracting COVID-19. Here's a look at some issues that have yet to pass either the House or Senate:

Lawmakers, civil rights advocates and Gov. Brian Kemp have announced a broad agreement to abolish Georgia's citizen's arrest law, which lets a private citizen make an arrest if a crime is committed in the person’s presence. The law came under scrutiny in the wake of last year’s shooting death of Ahmaud Arbery near Brunswick. One prosecutor who examined the case ruled that there wasn’t probable cause to arrest Travis McMichael and Greg McMichael, later charged with murder, because the McMichaels believed Arbery had committed a crime and were attempting a citizen’s arrest. House Bill 479 would let business employees and security guards detain people they believe stole something. But if a police officer or sheriff’s deputy doesn’t arrive within an hour, someone who is detained must be released along with their personal belongings. People who are just bystanders or witnesses generally would not have the right to detain people.

The odds are getting better that Georgians will soon be able to bet on their favorite sports teams, with the House and Senate considering bills legalizing the practice and taxing it for HOPE scholarships and public preschool subsidies. However, legalizing horse racing or casinos faces a tougher road. House Bill 86 awould mandate that the Georgia Lottery Corp. give at least six licenses to companies that want to offer sports betting in Georgia. After the companies pay out bettors’ winnings, the state would tax the remaining proceeds at 20%. A Senate committee, though, decided there needs to be a constitutional amendment to allow sports betting, requiring a two-thirds vote and then a public referendum. Senators are also seeking a lower tax rate. There's also talk of legalizing casinos and betting on horse racing, which would require constitutional amendments that lawmakers are considering. It's unclear if they will gain any traction.

Lawmakers in coming days will debate whether Georgia should devote more public money to paying for private schools or home-schooling. Senate Bill 47 would broaden eligibility for an existing program that pays for special education students to attend private schools. The bill would expand eligibility to students who have accommodation plans under section 504 of the federal Rehabilitation Act, as well as students with a diagnosis of specific disability. House Bill 60 would create educational savings accounts that parents could direct for learning-related purposes. Students would get about $5,700 on average, but amounts would vary per school district. The program would be limited to fewer than 5,000 students in the first year. Lawmakers are also considering raising the ceiling for tax credits given for donations to private school scholarships from $100 million to $150 million a year.

While Labor Commissioner Mark Butler says his office is doing the best it can to process and pay unemployment claims, many lawmakers say the elected Republican has done too little to address the backlog that constituents have complained about. Senate Bill 156 would temporarily strip Butler of much of his authority, creating a chief labor officer who would be appointed by the governor and confirmed by the Senate. The chief labor officer would be charged with improving “the reliability and timeliness” of unemployment benefit awards.

House Speaker David Ralston is pushing a $100-million-plus state income tax cut. House Bill 593 would raise the amount of money that someone could earn before starting to pay state income taxes. The standard deduction for an individual would rise from $4,600 to $5,400, while the standard deduction for a married couple filing jointly would rise from $6,000 to $7,100. The change would allow Georgians to save up to $75 a year on their income taxes, although most would save less. Supporters say it's desirable to cut taxes as state finances rebound, but opponents say it's more important to restore funding cut from schools and agencies.

Lawmakers are considering a series of bills that would limit the emergency powers that Gov. Brian Kemp has exercised under Georgia's public health emergency for nearly a year. Some would just put into law emergency orders that Kemp has made. However, the Republican governor is threatening to veto House Bill 358, which would require lawmakers to renew his emergency powers after 30 days, and then every 90 days after that. Kemp has questioned the practicality of convening lawmakers during an emergency, but supporters say the General Assembly needs to exercise oversight over the governor's sweeping emergency powers, which allow him to suspend and basically rewrite laws and regulations.

Lawmakers are debating several bills that would ban transgender girls and women in Georgia from playing on school and college sports teams. Supporters say the measure is needed to prevent girls from unfairly losing out to those who were born as males. Opponents, though, say it’s illegal under federal law and needlessly cruel. The measures are part of a nationwide push by conservative groups. It’s similar to an Idaho law that’s been blocked by a federal judge while a lawsuit is decided.

Georgia drivers wouldn't be able to avoid penalties by telling judges they have purchased hands-free devices for their cellphones under House Bill 247. Supporters say the current provisions are intended to let people out of a first-time offense, but are unenforceable. They say people can get caught in multiple jurisdictions and get out of multiple fines because different courts can’t keep track. Georgia first passed its hands-free law in 2018.