Bipartisan call for Evers to fire whoever recorded meeting 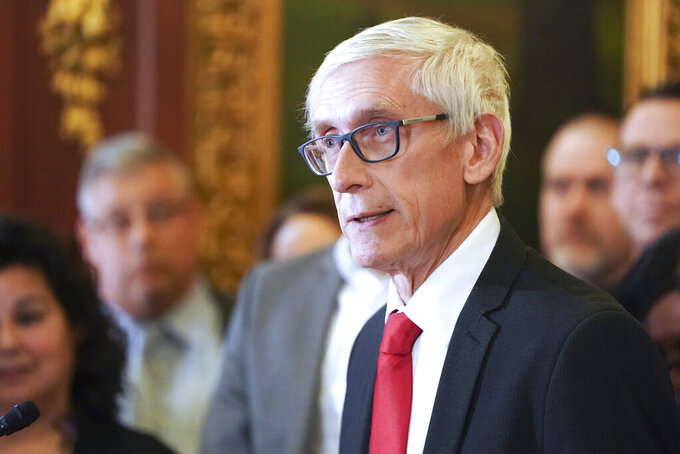 The May 14 meeting between Evers and Republicans focused on the path forward after the Wisconsin Supreme Court struck down the state’s stay-at-home order. Evers wouldn't say what action, if any, was being taken against his staff member who recorded it. Audio of the call was released under an open records request.

“I did not know about it," Evers said of the recording during a news conference Thursday. "A staffer wanted help in taking notes and that’s why that staffer did that. I will not discuss personnel issues in public. Needless to say, the practice has ended with this one time.”

When asked how he didn't know the call was being recorded, Evers said: “How did I not know? Because I didn't know.”

Evers said the staff member who recorded the call had been in a different room.

Wisconsin law allows for telephone calls to be recorded as long as one party involved knows about it. Evers' attorney, Ryan Nilsestuen, would not say when asked Thursday who knew that the call was being recorded. He and Evers' chief of staff, Maggie Gau, were the only members of Evers' staff to speak during the call, but it's not known how many others were listening or who they were.

The Republicans on the call, Assembly Speaker Robin Vos and Senate Majority Leader Scott Fitzgerald, said the staff member who recorded it should be fired. Democratic Rep. Jonathan Brostoff also said the person should be fired.

“I don’t give a damn about what letter is next to someone’s name, this is unacceptable,” Brostoff tweeted.

Democratic Assembly Minority Leader Gordon Hintz criticized the recording, but stopped short of calling for a dismissal, during an interview on WHBY-AM.

“That’s just not acceptable,” he said of the recording. “That’s not how we do things. It was bush league and amateur to have something like that happen and I do not condone that in any way.”

Brostoff called for Vos to resign because, during the meeting with Evers, Vos blamed an outbreak of the coronavirus in Racine County on immigrants. On the recording, Vos said the outbreak occurred among “a large immigrant population where it’s just a difference in culture where people are living much closer and working much closer."

“This is 2020, not 1920," Neumann-Ortiz said. “Instead of recognizing the important contributions immigrant essential workers and their families make to Wisconsin’s economy, he scapegoats them to absolve himself of his own failure to protect the health and lives of all workers against COVID-19.”

Forward Latino and the Racine Interfaith Coalition called for Vos to apologize. Evers was asked whether he thought Vos should apologize but wouldn’t comment, saying he hadn’t listened to the recording. Evers was on the call when Vos made the comment.

“Speaker Vos has been very concerned about the COVID-19 outbreaks in his area,” said his spokeswoman Kit Beyer. “A few days before the secretly recorded call, he was briefed by local hospital officials about the spike in cases. As a result, he has been in frequent communications with local officials, including the county executive, about the response.”

Across the country, states reporting racial data indicate higher rates of positive cases of the virus among the Latino population. In Wisconsin, about 33% of the cases and deaths from COVID-19 are among Hispanics and Latinos even though they make up just 7% of the state's population.