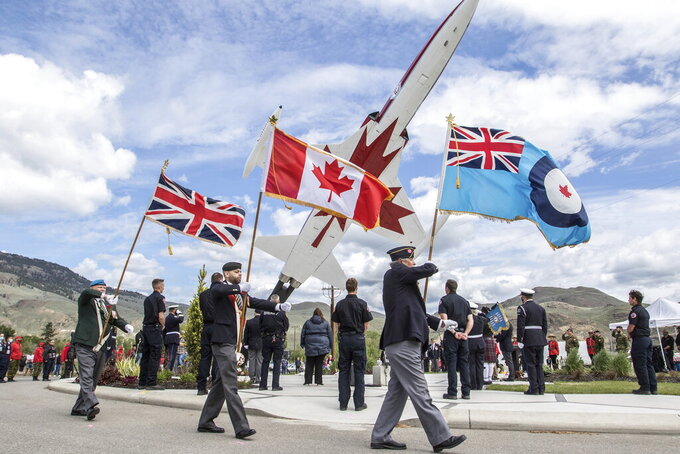 Flags are carried at a tribute ceremony to honour Capt. Jennifer Casey at the Kamloops Airport Thursday May 21, 2020. Capt. Casey, the Snowbirds public affairs officer, died after the Snowbirds jet she was in crashed shortly after takeoff. (Jeff Bassett/The Canadian Press via AP)

The Snowbirds had been in the midst of a cross-country tour aimed at boosting morale during the COVID-19 pandemic when one of the planes crashed after takeoff, killing the spokesperson for the team and injuring the pilot.

A preliminary investigation report posted by The Royal Canadian Air Force said video footage of the plane just before the crash showed a bird very close to the plane’s right engine intake “during the critical phase of take-off.”

The crash near Kamloops killed Air Force Capt. Jenn Casey, a public-affairs officer riding as a passenger, and seriously injured the pilot. Though the plane crashed in a populated area, nobody on the ground was badly injured.

The report said the investigation will continue to probe the possibility of a bird strike and whether the Tutor jet’s escape devices worked properly.