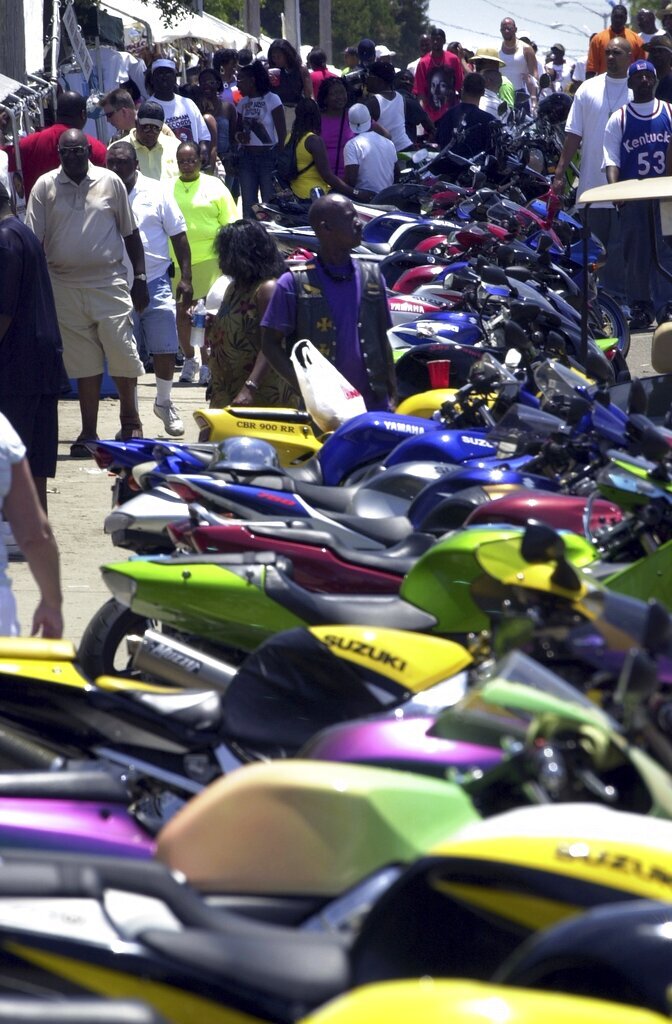 FILE- In this May 29, 2005 file photo, colorful motorcycles stand in line in Atlantic Beach S.C., during the 2005 Atlantic Beach Bikefest. The city of Myrtle Beach in South Carolina is in the second week of a federal trial over whether it discriminates against thousands of Black tourists who visit every May to celebrate motorcycle culture. (Randall Hill/The Sun News via AP, File)

COLUMBIA, S.C. (AP) — Motorcycle clubs roar into Myrtle Beach, South Carolina, each May for separate week-long rallies, one mostly white, the other mostly Black. Each brings millions of dollars, spent by hundreds of thousands of bikers, and some inevitably let loose, with binge drinking, public nudity and noise competitions that rattle the beachfront high-rises.

At 60, Metris Batts says she parties a little more responsibly than many others, but she still rides to be seen at the Black event, cruising atop her silver-gray Honda VTX in brightly colored cowboy boots and rhinestone-studded jeans.

There's a thrill to riding fast, Batts says, so it's infuriating to be stuck for hours in a 23-mile (37-kilometer) one-way detour. Police put up the barricades along Ocean Boulevard during the peak nights of Black Bike Week, officially known as the Atlantic Beach Bikefest. White bikers rolling in days earlier for Harley Week each May are treated differently, Black bikers say.

“If you get in a cattle chute, you can't get out,” Batts said. "We ride for freedom.”

Civil rights lawyers have now accused the city in federal court of racial discrimination by creating an experience so unpleasant that Black visitors will eventually go away. In opening arguments last week to five Black and four white jurors, an NAACP lawyer said Myrtle Beach during Bikefest is “like a city under martial law," The Sun News of Myrtle Beach reported.

City attorneys have countered that “different traffic control strategies” apply to each festival, and that the police response to Bikefest was imposed to prevent violence following a spate of shootings and robberies six years ago.

Three people were killed and seven injured that weekend in 2014. Then-Gov. Nikki Haley called for getting rid of the Black event altogether, calling it a “pollution of South Carolina.”

Bikefest originated along historically segregated beaches, where white bikers had congregated as early as 1940 for the annual Harley Week. Around 1980, a local Black motorcycle club called the Carolina Knight Riders started holding a family-and-friends gathering at Atlantic Beach, a hamlet just north of Myrtle Beach known as the “Black Pearl” for its reputation as a haven for African American beachgoers.

The Atlantic Beach event soon sprawled into nearby towns, including Myrtle Beach, where most of the 35,000 residents are white. Organizers say it's the single largest yearly influx of Black visitors to the area, and like Harley Week, it has grown far beyond any one group's ability to control it.

Myrtle Beach, always struggling to promote South Carolina’s Grand Strand as a family-friendly upscale destination, tried to push bikers out with helmet requirements and noise ordinances, only to be taken to court by white and Black bikers alike. The city also lost to the NAACP when a federal judge said its early-2000s Bikefest traffic plan was racially motivated; that one forced riders into one-way traffic for 5 miles (8 kilometers).

Encountering unfriendly shopkeepers and officers has become part of the Bikefest experience, said bikers interviewed by The Associated Press. The NAACP has sued accusing restaurants and a hotel of discriminating against African American tourists during the event, just as it has challenged authorities in other tourist destinations where Black visitors say they've suffered abusive policing.

“If my motorcycle ran out of gas in Myrtle Beach, I would push it until I got out of the city limits,” said Lewis Clark, a biker in Rocky Mount, North Carolina, who helped organize the event in prior years.

Myrtle Beach city and Chamber of Commerce officials refused to talk about the trial.

Jason Eastman, a sociologist at Coastal Carolina University, likens both Black Bike Week and Harley Week to events like Carnival and spring break, when visitors think social norms can be upturned. What separates them is how residents have responded, Eastman said.

About a decade ago, he dug through 8,500 online reader comments about the bike weeks on articles by The Sun News.

He found that while the behavior of bikers at the events are similar, commenters frame "the mostly white Harley riders as successful in their educations and careers," while stereotyping Black bikers as “unemployed, uneducated, immature, underclass criminals.”

Bikefest old-timers often disavow the “Black Bike Week” moniker, trying to steer the event back to Atlantic Beach, where it all started, supporting hole-in-the-wall joints and hanging out in the local Hooters parking lot or at the Carolina Knight Riders clubhouse.

This year's Bikefest — which would have been in its 40th year — was canceled because of COVID-19. The Knight Riders are already planning an event next May to make up for what they missed. “We’re calling it the 40 Plus One,” said Aaron Cox, the club's business manager.